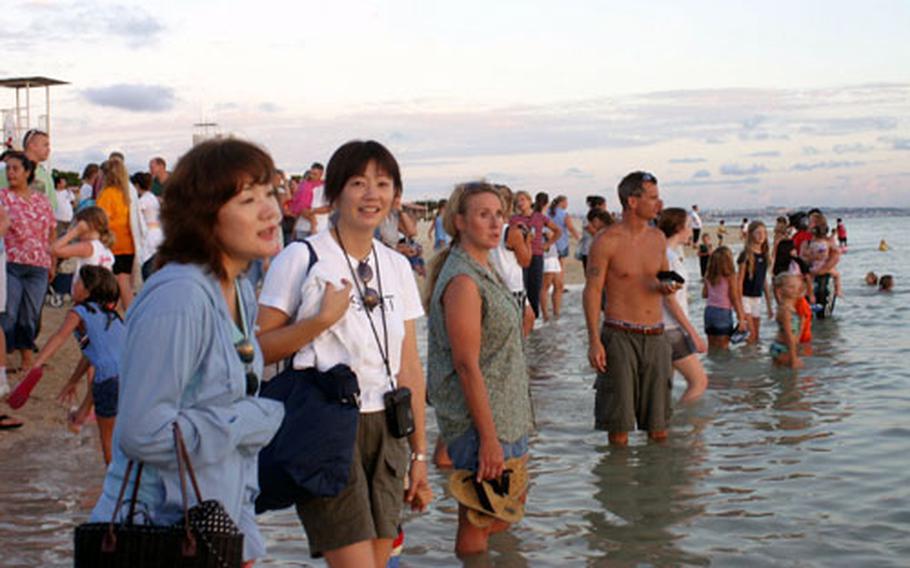 Standing knee-deep in water at Torii Beach at Torii Station, Okinawa, more than 200 Japanese and American parents, children and beach officials assist 70 baby red sea turtles back to sea Tuesday after their mother crawled ashore on Mother&#39;s Day and deposited them in the protected sands of the Army base. (Mark Rankin / S&S)

TORII STATION, Okinawa &#8212; About 70 baby sea turtles, barely two days out of their nests, were released to the sea here Tuesday to begin their 6,000-mile trek to the west coasts of the United States and Mexico.

The palm-sized baby red sea turtles were helped on their journey by about 200 humans, many of them local schoolchildren invited to the event by the base recreation specialists, who&#8217;ve tended the eggs ever since their mother crawled ashore on Mother&#8217;s Day to deposit them in the Army base&#8217;s protected sands.

&#8220;Every year since the summer of 2000 we have been assisting in taking care of the baby turtles at Torii,&#8221; said Tom Kochi, Torii Station Fitness Center manager. Helping him care for the turtles were his brother, Nao, the beach manager, and lifeguard Mayo Miyazato, assistant beach manager.

During the season, Kochi and his team survey the beach at night looking for evidence of turtle eggs. Sometimes they are lucky and actually see the mother turtle. Other times, the baby turtles are not discovered until they hatch and try to make their way back to the sea.

That&#8217;s what happened in August 2002, when 19 hatchlings sought their way across the sand but became disoriented by the sound of a large air conditioner and moved away from the beach. Miyazato and her son found them wandering the wrong way near the point of exhaustion.

They placed the turtles in an aquarium until they regained their strength, then set them free at high tide to begin their long trek to feeding grounds in Baja, Calif.

&#8220;They swim south from here and then east, passing by the Hawaiian Islands until they reach the far shore,&#8221; Kochi said.

After 10 to 30 years &#8212; and by then weighing up to 225 pounds &#8212; they return to Japanese waters to mate. Tagged turtles have been observed paddling as much as 100 miles a day during their return trip to their birthplace.

Kochi said a few of the baby turtles will be kept at a special aquarium at Torii Beach for observation. They will be tagged and released into the water next year.

Still unknown, for example, is whether the turtles, which can live more than 150 years, make more than one return mating trip in their lifetimes or whether males and females follow the same sea routes.

&#8220;This is great for our community,&#8221; Williams said after watching Betty swim to freedom. He said Torii Station is known in the community as contributing to the environment, and he was pleased to see so many parents and their children turn out for the event.