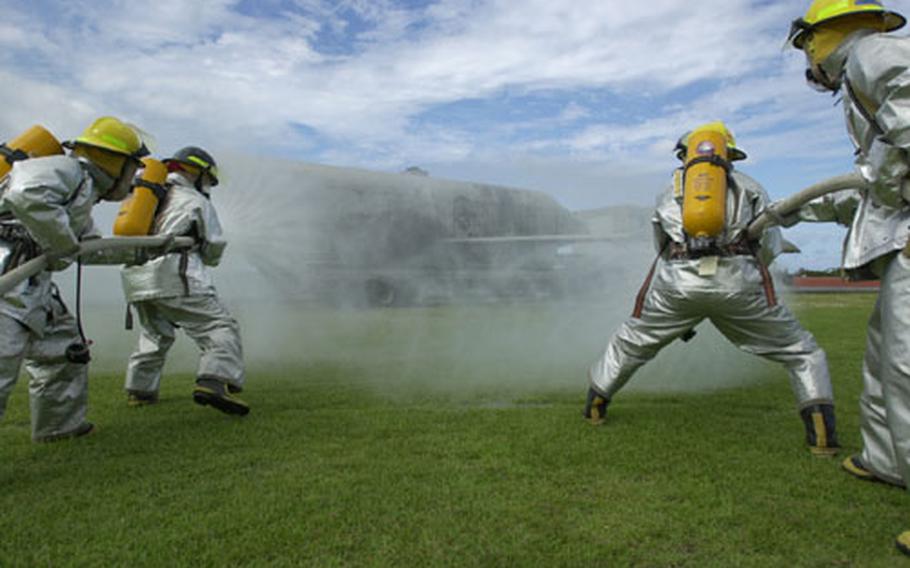 Torii Station firefighters battle the make-believe blaze from the helicopter that crashed at Landing Zone Renegade during the base&#39;s annual mass casualty exercise Sept. 26. While there were no flames, red smoke grenades were thrown under the "helicopter" to simulate them. (Fred Zimmerman / S&S)

Torii Station firefighters battle the make-believe blaze from the helicopter that crashed at Landing Zone Renegade during the base&#39;s annual mass casualty exercise Sept. 26. While there were no flames, red smoke grenades were thrown under the "helicopter" to simulate them. (Fred Zimmerman / S&S) 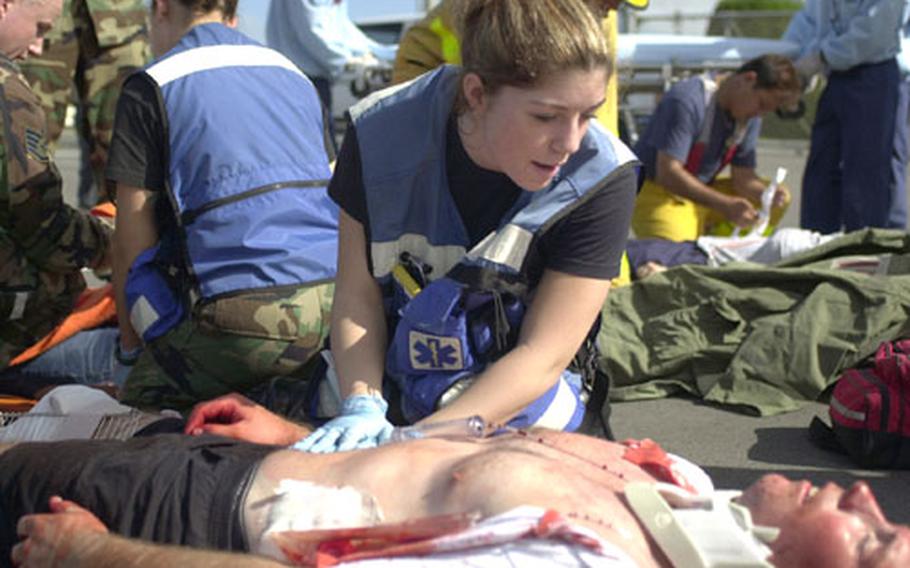 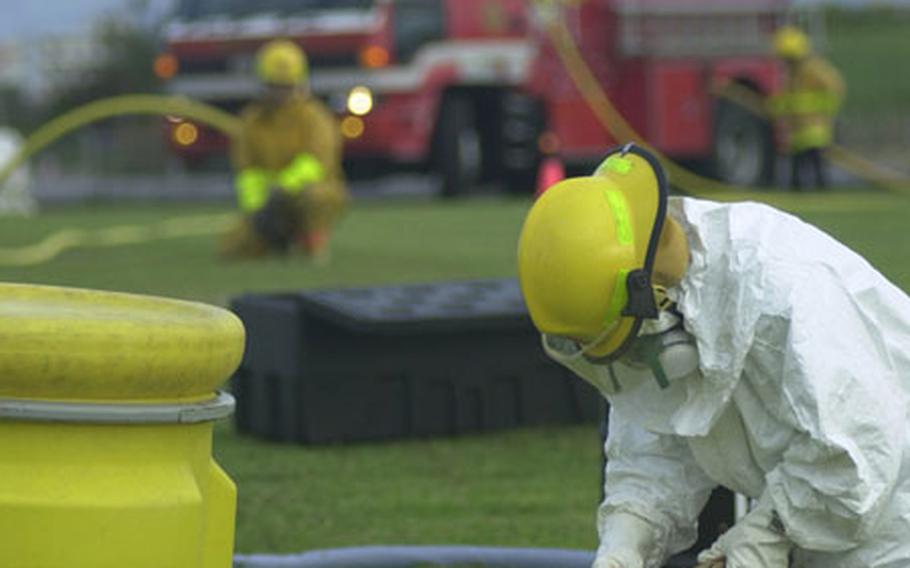 A Torii Station firefighter gets ready to clean up a simulated fuel spill with an absorbing material during the base&#39;s annual mass casualty exercise Sept. 26. In addition to the "fuel spill," there was a four-vehicle "accident" and a "helicopter crash." (Fred Zimmerman / S&S) 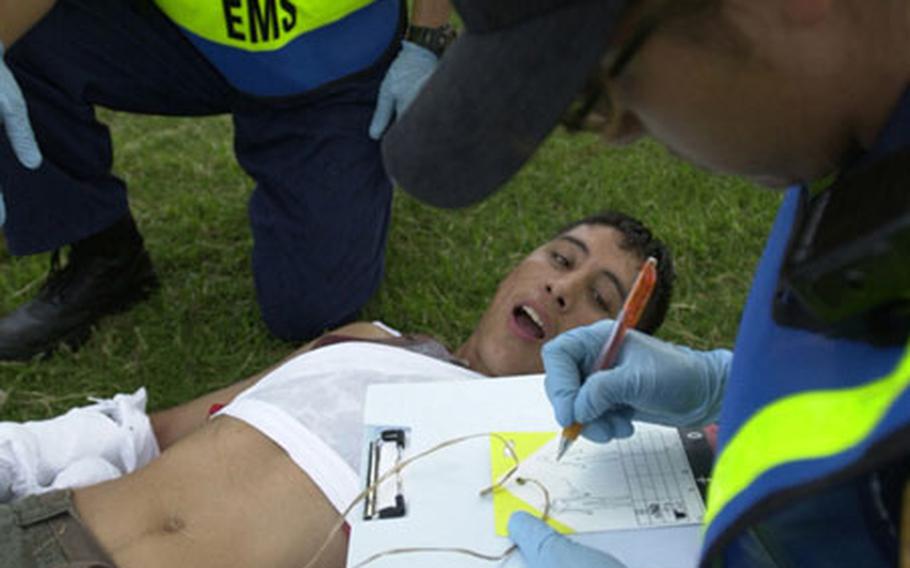 A victim of the mock helicopter crash at Landing Zone Renegade on Torii Station moans in pain as a medical worker marks his injuries on a tag. Torii Station held their annual mass casualty exercise Sept. 26 with local firefighters from Nirai and the other branches of U.S. service. (Fred Zimmerman / S&S)

TORII STATION, Okinawa &#8212; Torii Station held its annual mass-casualty exercise here Friday to ensure the base and surrounding community are prepared for any emergencies.

The exercise included firefighters and rescue personnel from the 10th Area Support Group and the local Nirai Fire Department, the Disaster Response Team from the U.S. Naval Hospital, an ambulance from Kadena Air Base and Camp Foster firefighters.

The event kicked off with a simulated fuel spill at Landing Zone Renegade by the beach. Torii Station&#8217;s firefighters, aided by military police, quickly cordoned off the area and contained the &#8220;spill.&#8221; Afterward, the 50-gallon drums were sealed inside plastic containers and the area was dried up with absorbing materials.

All was quiet for almost a half-hour, when suddenly, a radio call indicated there had been a four-car accident near Torii Beach.

Once again, military police responded quickly and were the first on the scene, but they immediately realized there was little they could do. They called in the Torii firefighters, as well as the Nirai department and Kadena ambulance.

At the scene, emergency workers were faced with eight injured people, two in each car, and they had to figure how to best care for them.

After almost an hour of work, the injured were taken away from the site.

A short time later there was yet another call. The scenario was a helicopter crash at the scene of the fuel spill and 20 people lying on the ground.

While tending to the injured, rescuers also had to worry about the flames from the nearby burning helicopter.

The same units that responded to the car accident quickly arrived on scene, with additional help provided by the Navy&#8217;s Disaster Response Team and firefighters from Camp Foster.

Victims were quickly carried away from the burning wreckage as the Torii firefighters put out the &#8220;flames,&#8221; which were actually red smoke grenades.

Once the victims were away from the danger, they were categorized, tagged and treated. They were then taken to the makeshift hospital at the base gym, with those in need of immediate care going first.

The exercise wrapped up as those with minor injuries were taken to the hospital.

Parsons said the &#8220;factor of the unknown&#8221; and communication with the local Japanese personnel were the biggest challenges during the exercise, but added that the language barrier was quickly a non-issue because they had translators both on-scene and at the hospital.

Army Capt. Martin Barr, the exercise coordinator, said the annual exercise is mandatory and gets &#8220;bigger and better&#8221; every year.

He said the training&#8217;s three main objectives are to validate the mass-casualty standard operating procedures, foster good working relationships with local counterparts and sister services, and acquire a dose of realistic experience.

Jun Kiyokawa, the Nirai fire chief, said it&#8217;s important for his people to work with the services because of the potential disasters they could fight together.

Torii Station&#8217;s provost marshal, Capt. Janette Kautzman, said the training went smoothly because everyone cooperated with each other.

&#8220;It was successful because each section was staying in their lane and everyone allowed the subject matter experts to do their jobs,&#8221; she said.