Torch is lit on inaugural Warrior Games in Colorado 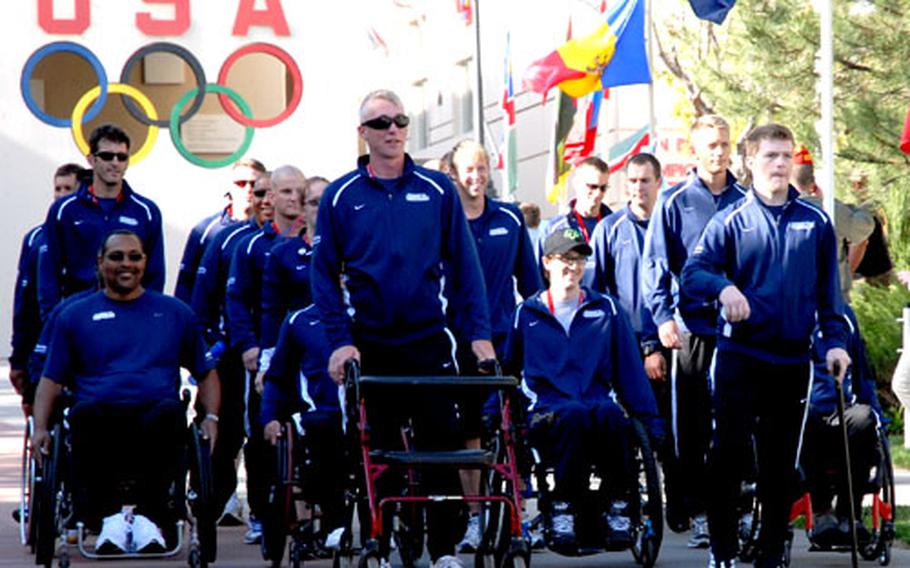 The 25 wounded airmen representing the Air Force in the inaugural Warrior Games in Colorado Springs, Colo., are introduced during the opening ceremony Monday night. About 200 athletes, who have physical and mental injuries and are competing on behalf of their services, will face off in events such as sitting volleyball, archery, shooting and wheelchair basketball. (Megan McCloskey / S&S)

The 25 wounded airmen representing the Air Force in the inaugural Warrior Games in Colorado Springs, Colo., are introduced during the opening ceremony Monday night. About 200 athletes, who have physical and mental injuries and are competing on behalf of their services, will face off in events such as sitting volleyball, archery, shooting and wheelchair basketball. (Megan McCloskey / S&S) Army Sgt. Robert Price, who lost part of his right leg in Iraq, passes the torch to former Lance Cpl. Charles Sketch, who is a blind double-amputee, with the help of Gunnery Sgt. Marcus Wilson, during the opening ceremony Monday at the inaugural Warrior Games for wounded servicemembers. The torch was passed from service to service. (Megan McCloskey / S&S) 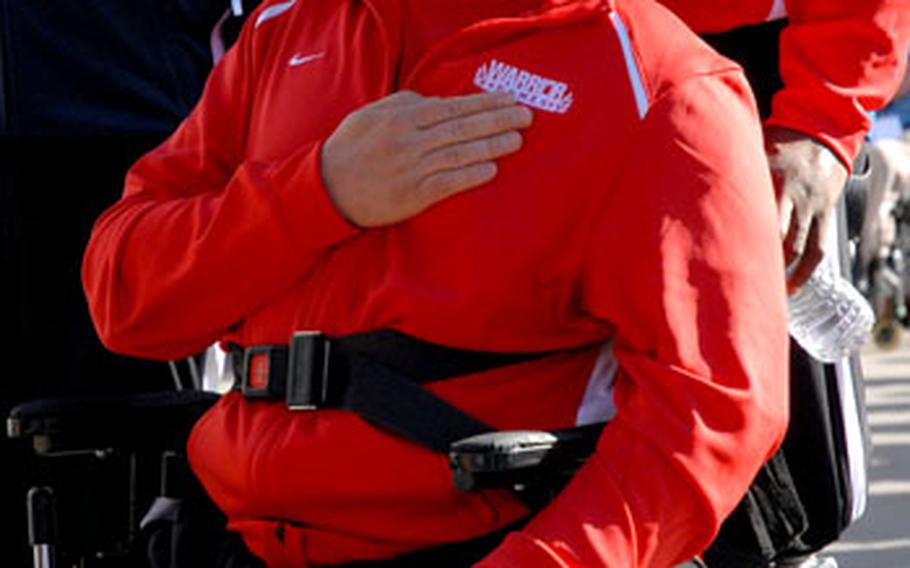 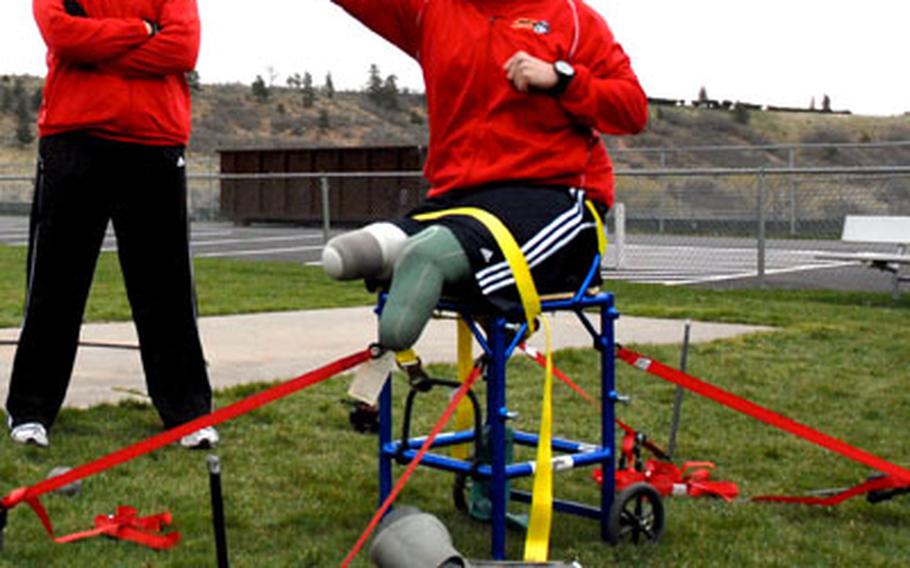 COLORADO SPRINGS, Colo. &#8212; Many of them know each other from the halls of Walter Reed Army Medical Center.

They might have rehabbed together. Or cheered each other on when they learned to run again.

This week the wounded soldiers, Marines, sailors and airmen are representing their service as athletes.

About 200 servicemembers with mostly combat-related injuries are participating in the inaugural Warrior Games, a Paralympics-style competition where the services compete against each other in events such as sitting volleyball, wheelchair basketball, archery, shooting and swimming.

Brig. Gen. Gary Cheek, head of the Army&#8217;s Warrior Transition Command, conceived the Games and has said he thinks injured servicemembers need to be pushed hard to set goals and constantly be moving forward.

Competition is a great motivator.

&#8220;Sports gives you a chance to focus on something else besides your injury,&#8221; said Army Sgt. Robert Price.

Price, who lost his right leg below the knee to an improvised explosive device in Iraq in 2007, said it was adaptive sports that kept him in the Army. Now he&#8217;s a noncommissioned officer with a Wounded Warrior Battalion at Brooke Army Medical Center in San Antonio.

The weeklong event kicked off Monday night in Olympic fashion with an opening ceremony.

A soldier passed a torch to a Marine who handed it off to a sailor who in turn gave it to an airman who passed it to a Coast Guardsman. Then Hall of Fame quarterback and Naval Academy graduate Roger Staubach took the flame the rest of the way to light the torch at the entrance of the Olympic Training Complex where the Games are taking place.

Servicemembers with physical or mental injuries were eligible to participate.

Most of the athletes said they are excited to be back in a team environment.

Oklahoma National Guard Sgt. Kisha Mackerney, who lost part of her left leg in a motorcycle accident shortly after returning from her first tour in Iraq, said the Games offered camaraderie that wounded servicemembers crave.

Still, in a classic display of interservice rivalry, the sergeant, who deployed again after her amputation, said she was also looking forward to &#8220;kicking some Marine butt.&#8221;

&#8226; Catch the competition on the Pentagon Channel (www.pentagonchannel.mil) or watch highlights at the U.S. Paralympics Web site (http://usparalympics.org).