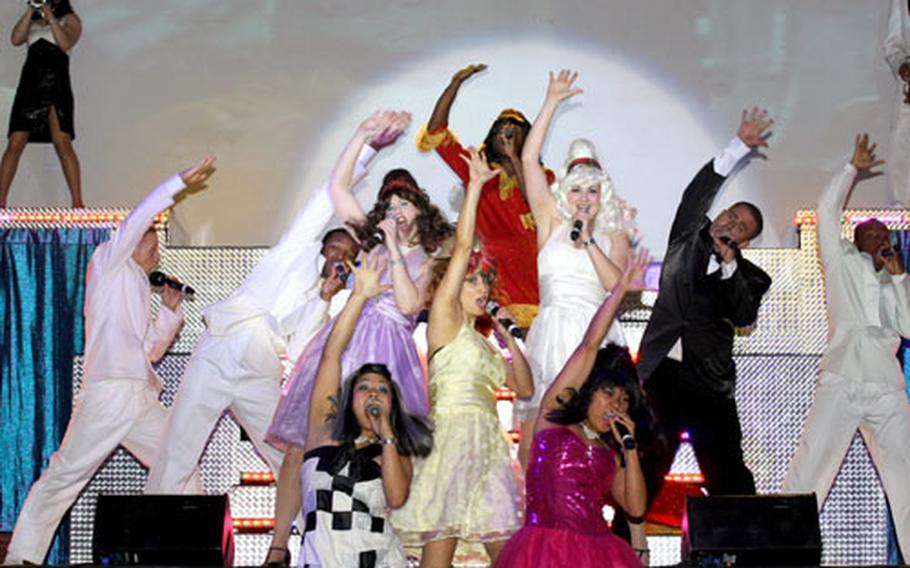 Members of Tops In Blue perform during a show at Yokota Air Base, Japan, Friday night. (Courtesy of U.S. Air Force)

Members of Tops In Blue perform during a show at Yokota Air Base, Japan, Friday night. (Courtesy of U.S. Air Force) 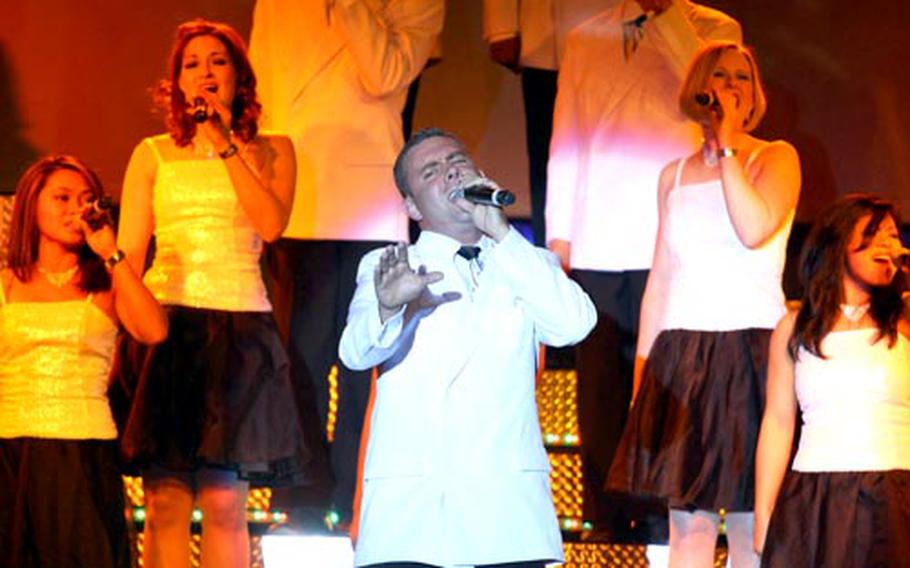 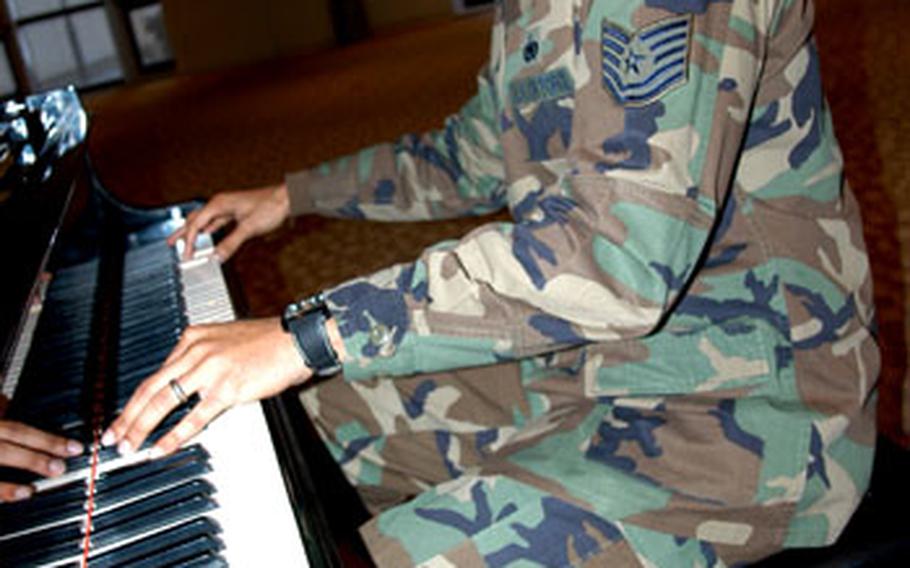 Tech. Sgt. Lamon L. Mabron, 29, of Misawa Air Base, Japan, had to commit about 70 songs to memory as keyboardist for the 2008 Tops in Blue team. The airman is one of two military members from Pacific Air Forces to make this year&#39;s team of traveling entertainers, who are touring the Asia-Pacific region now. (Jennifer H. Svan / S&S)

YOKOTA AIR BASE, Japan &#8212; Life on the road with Tops In Blue isn&#8217;t all glitz and glamour. The grueling 20-hour workdays and separation from family take a toll.

But two cast members get a little slice of home this week as the Air Force&#8217;s expeditionary entertainment group wraps up its annual Asia-Pacific swing.

Tech. Sgt. Lamon Mabron is a keyboardist from Misawa Air Base in northern Japan, while Staff Sgt. Oliver Dagum of Andersen Air Force Base, Guam, is one of 11 vocalists on the 2008 "Deja Blue" tour. Neither has been back since early March.

For Mabron, 30, who normally works for the 35th Logistics Readiness Squadron, the homecoming is an opportunity to finally see his first child. His wife, Kazumi, gave birth to a baby girl Nov. 19.

Dagum, 32, of the 734th Air Mobility Squadron, said he&#8217;s been to Iraq and Afghanistan during his nine-year career and compared Tops In Blue to a deployment.

He and his wife, Konet, got together in the States for a week around Thanksgiving. He&#8217;ll spend about three days at Andersen.

"I miss her and love her so much. I hope she knows that."

The 25 members of Tops In Blue are a mix of performers and technicians. In addition to rehearsing constantly, they&#8217;re also trained to assemble their equipment in hard hats before a show and break it down immediately afterward, often while still in stage makeup. It can take between three and four hours to set up or tear down the whole set.

With performances at more than 110 locations worldwide, Tops In Blue entertainers say they&#8217;re not even fazed by jet lag.

"We&#8217;re stretched to the limit sometimes," Mabron said. "There have been days where we work 24 hours and go to the hotel for five minutes just to check out, before we get on a plane and do it all over again. It does take a heavy toll on the body."

During setup for a U.S. show in early November, Mabron hurt his back lifting heavy equipment. He&#8217;s been told it&#8217;s a vertebrae injury that may require surgery after the tour.

"I just ignore the pain. There&#8217;s nothing you can do but suck it up, bite your lip and keep moving," he said.

Despite the grind and toil that come with the tour, Dagum calls his experience with Tops In Blue "priceless."

Almost two weeks ago, the group traveled about three hours from Osan Air Base in South Korea for a show in a remote part of the country.

"The Korean audience just started clapping in perfect rhythm as soon as we hit the stage. It was just amazing," Dagum said. "That&#8217;s one of the best places I&#8217;ve been to. We get to visit countries that some never get to in a lifetime."

Mabron said time for reflection will have to wait.

The curtain drops on the current tour in early March.