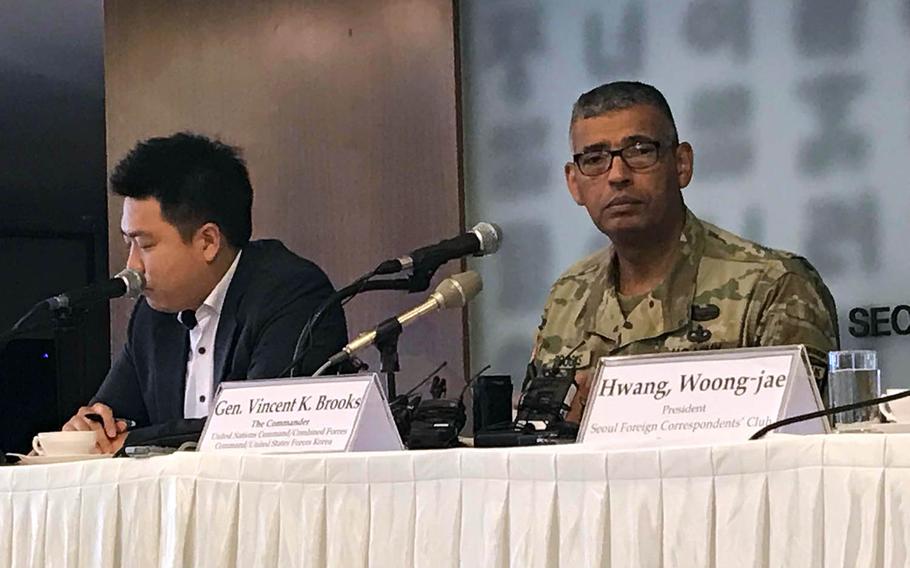 SEOUL, South Korea — The top U.S. commander in South Korea expressed support Wednesday for a plan to remove some guard posts from the tense border, saying it’s a “reasonable” risk that may help denuclearization talks with the North.

South Korea’s defense ministry has said it plans to close about 10 guard posts along the Demilitarized Zone and expects the North to reciprocate as part of a bilateral summit agreement to ease tensions.

Gen. Vincent Brooks — who wears three hats as the leader of U.S. Forces Korea, the United Nations Command and the Combined Forces Command — said he supports the initiative to reduce tensions and build trust between the rival nations.

“I have some concerns about what that means militarily to the ability to defend along the Military Demarcation Line and in depth beyond it,” he said at a press conference at the Seoul Foreign Correspondents’ Club.

“I believe that there’s a reasonable amount of risk that’s involved in this, not an excessive amount of risk,” to the defense of South Korea, he said.

The border post decision was the latest in a series of moves by Seoul to improve relations with the North even as nuclear talks between North Korea and the United States have stalled.

South Korean Defense Minister Song Young-moo didn’t give a timeline but said it would be a gradual process.

“What it means is that we will withdraw one or two guard posts first, then additional ones,” he was quoted as telling the National Assembly’s defense committee on Tuesday.

The two Koreas have been divided by the heavily fortified border, which is lined with barbed wire and dotted with landmines, since their 1950-53 war ended in an armistice instead of a peace treaty.

The U.S. maintains about 28,500 servicemembers in the South.

“We’ll find other ways to maintain readiness and that means more creativity in how we do our work, sharing knowledge with different leaders as they change out to make sure we don’t atrophy in our readiness while our diplomatic effort is ongoing,” he said.

“Perhaps we’ve been told for now to put our sword back into the sheath, but we have not been told to forget how to use it,” he added.