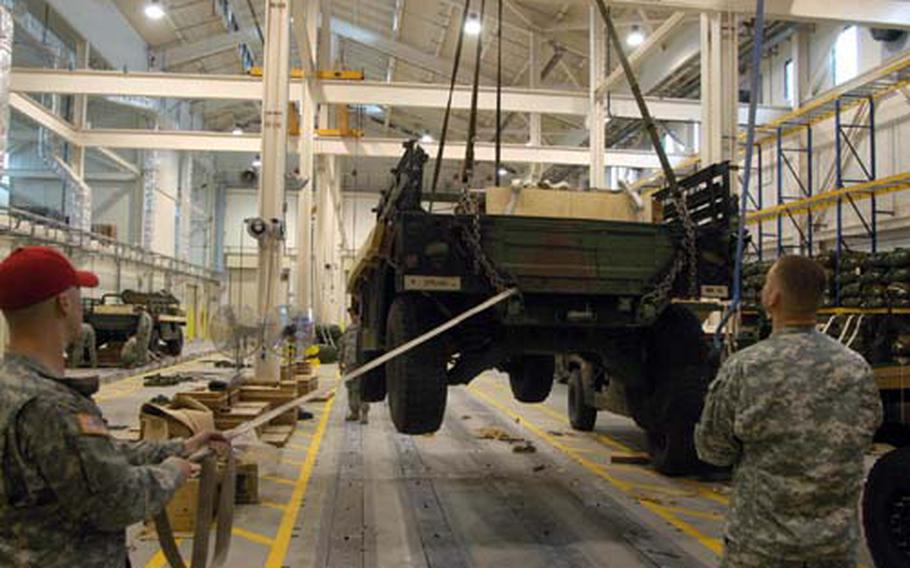 Spc. Brett Jones, left, and Sgt. Joshua Gardner use a crane to lift a Humvee inside the massive heavy drop facility at Aviano Air Base, Italy. The facility, used for the first time this weekend, is the largest of its kind for the U.S. military in Europe and is designed as a workplace for riggers to prepare heavy equipment for aerial drops. (Kent Harris / S&S)

Spc. Brett Jones, left, and Sgt. Joshua Gardner use a crane to lift a Humvee inside the massive heavy drop facility at Aviano Air Base, Italy. The facility, used for the first time this weekend, is the largest of its kind for the U.S. military in Europe and is designed as a workplace for riggers to prepare heavy equipment for aerial drops. (Kent Harris / S&S) 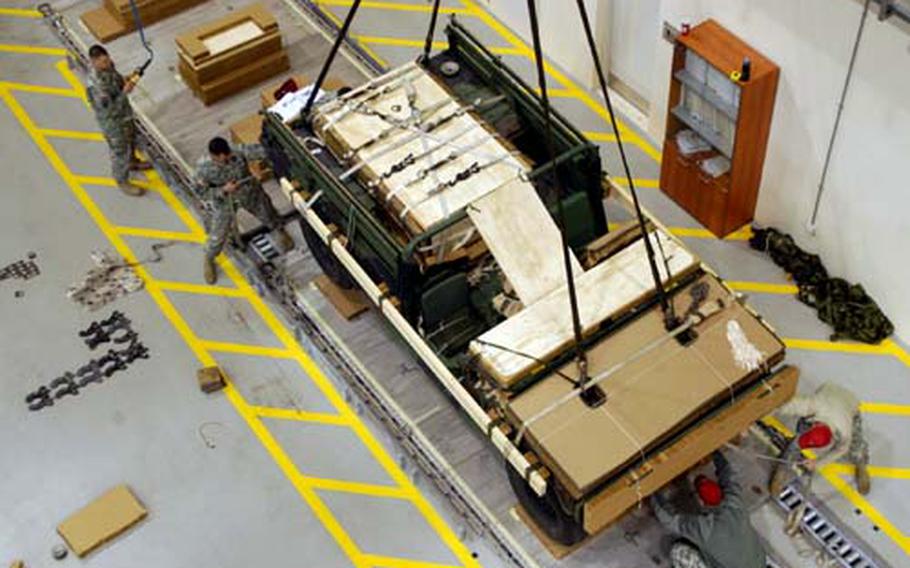 Soldiers assigned to the Aerial Delivery Platoon maneuver a Humvee into position onto a holding platform. The vehicles are broken down, protectively wrapped, tied down to a platform and fitted with parachutes before they’re loaded onto transport planes. (Kent Harris / S&S) 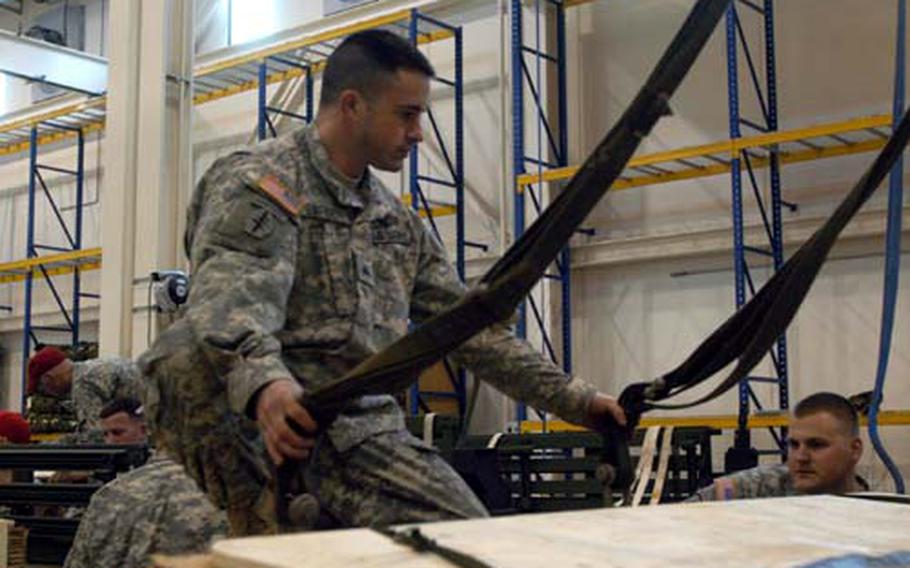 Sgt. Heath Barber, the shop foreman at the heavy drop facility at Aviano Air Base, Italy, prepares to attach cables from an overhead crane to a Humvee. (Kent Harris / S&S) 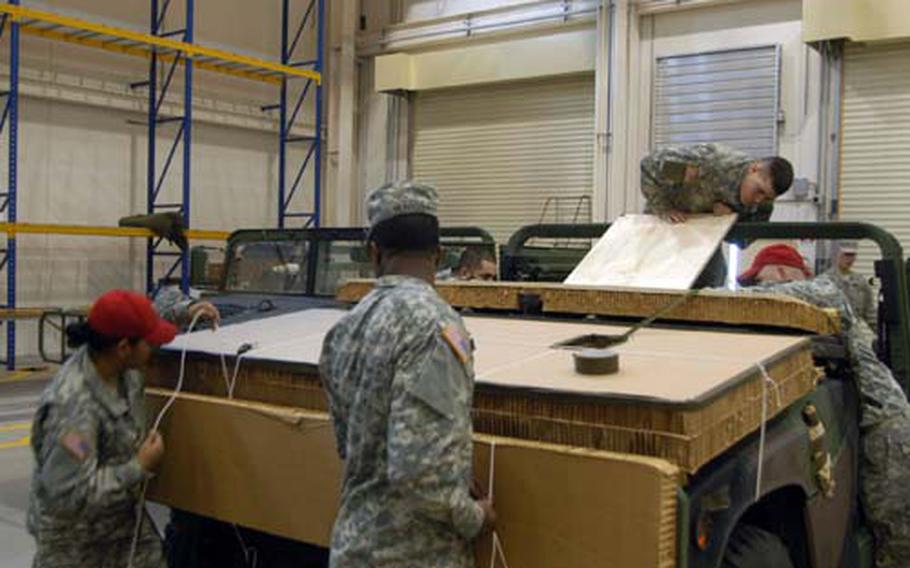 Soldiers assigned to the 2nd Battalion, 503rd Infantry Regiment and 173rd Base Support Battalion cover a Humvee with protective material while preparing it to be dropped from an airplane at the heavy drop facility. (Kent Harris / S&S) 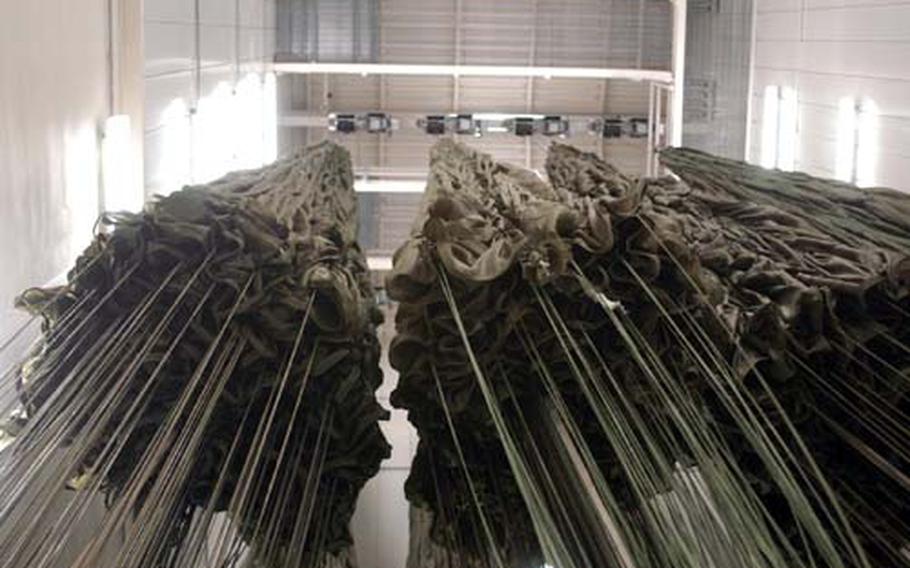 A handful of G-11 parachutes, which weigh about 250 pounds and are capable of supporting about 5,000 pounds in the air, hang in the drying tower at the heavy drop facility at Aviano Air Base, Italy. Parachutes that get wet need to be dried before they’re used again. (Kent Harris / S&S)

AVIANO AIR BASE, Italy &#8212; Staff Sgt. Matthew Eakes has been stationed at Aviano long enough to have some perspective.

He was among the soldiers who rigged about two dozen Humvees in 2003 for a jump into northern Iraq. The vehicles &#8212; and a load of missiles &#8212; eventually were dropped by C-17 Globemasters along with about 1,000 paratroops.

The heavy rigging was done in clamshell tents temporarily set up, because there was no facility at Aviano big enough to handle the job.

Eakes and other members of the 173rd Base Support Battalion&#8217;s Aerial Delivery Platoon now have a new work space sure to make many other Army riggers green with envy.

The massive heavy-drop facility is modeled after a similar facility in North Carolina used by the 82nd Airborne Division. The structure is about five stories high and large enough to put 24 Humvees inside. It&#8217;s one of the bigger structures at Aviano and the largest of its kind in Europe.

But that didn&#8217;t stop them from rigging up four Humvees to drop at an Italian site near Pisa. Thanks to rainy weather, it&#8217;s questionable whether the drops will actually take place this time.

Teams from each of Vicenza&#8217;s two infantry platoons took two Humvees to the facility and got them ready to drop. That involved breaking down some parts and then lashing packing material to various vulnerable spots. The Humvees were then lifted onto platforms and tied down. The facility has one crane capable of lifting 45,000 pounds and another rated at 71,000 &#8212; more than enough to handle anything the Army would drop from an airplane. Two G-11 parachutes are secured and the platforms will eventually be loaded onto C-130s that fly down from Ramstein Air Base in Germany. Each G-11 chute can support 5,000 pounds of material, and the shop might eventually house more than 700 of them. In order to stabilize the load &#8212; and to simulate boxes of ammunition &#8212; soldiers stacked several hundred pounds of boxes filled with dirt into the Humvees.

Barber said soldiers can work on up to 24 Humvees at a time in the facility, and a nearby covered ramp can hold platforms for another 40. Soldiers can also package trucks, howitzers and various other equipment in the facility. And it could be adapted to package humanitarian supplies for future missions by the Southern European Task Force in Africa as well.