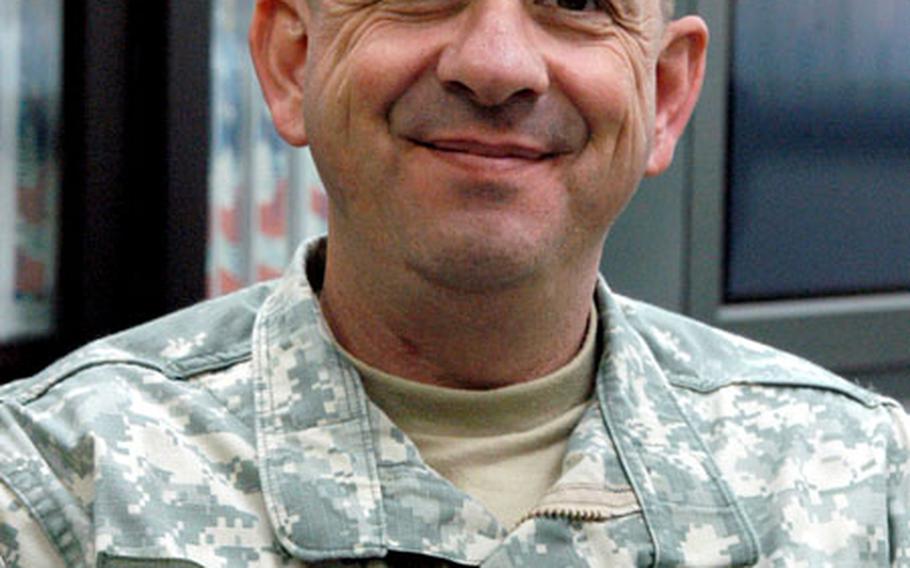 YONGSAN GARRISON, South Korea &#8212; When Troy Welch came to South Korea five years ago, he saw something he&#8217;d never seen in his two decades with the U.S. Army.

The command sergeant major said it showed up in entry-level training, friendships and, once he moved into his office at U.S. Forces Korea headquarters two years ago, even in commanding generals&#8217; decisions.

Welch, 45, is leaving that team when he steps down May 6 as the top enlisted servicemember among USFK&#8217;s 32,500 troops to take a position in Washington.

Welch&#8217;s new assignment will deal more with Army equipment than soldiers. He&#8217;ll be the Army&#8217;s G-4 command sergeant major in charge of logistics &#8212; ordering, delivery and taking inventory of equipment for soldiers around the world.

During his tenure here, he&#8217;s overseen new training regimens, closed bases, moved troops into new quarters and made other decisions that execute the military&#8217;s transformation to a smaller, more concentrated force in South Korea.

Perhaps one of the greatest challenges, he said, came toward the end of last summer. Strike Force, a brigade within the Army&#8217;s 2nd Infantry Division, got orders for a yearlong Iraq deployment. The commanders trained the troops for urban warfare at Rodriguez Range near the North Korean border, Welch recalled during an interview in his office.

Much of the training Welch helps oversee has evolved in the past few years to reflect current conditions in the Middle East, he said. Troops in South Korea are doing more live-fire convoys and more preparations for suicide car-bombers, he said.

Welch joined the Army 28 years ago as a cook. He&#8217;d been to South Korea before for exercises, but was never stationed here until 2000, when he became the command sergeant major with the 23rd Area Support Group at Camp Humphreys and then the 19th Theater Support Command at Camp Henry. He moved to USFK headquarters in May 2003.

He&#8217;s seen plenty of change since arriving in South Korea.

&#8220;You go to Camp Humphreys today, and it surely isn&#8217;t the Camp Humphreys of five years ago,&#8221; he said, referring to the new commissary, exchange and housing units going up there.

Welch said he believes South Korea is a better place to serve than when he first came.