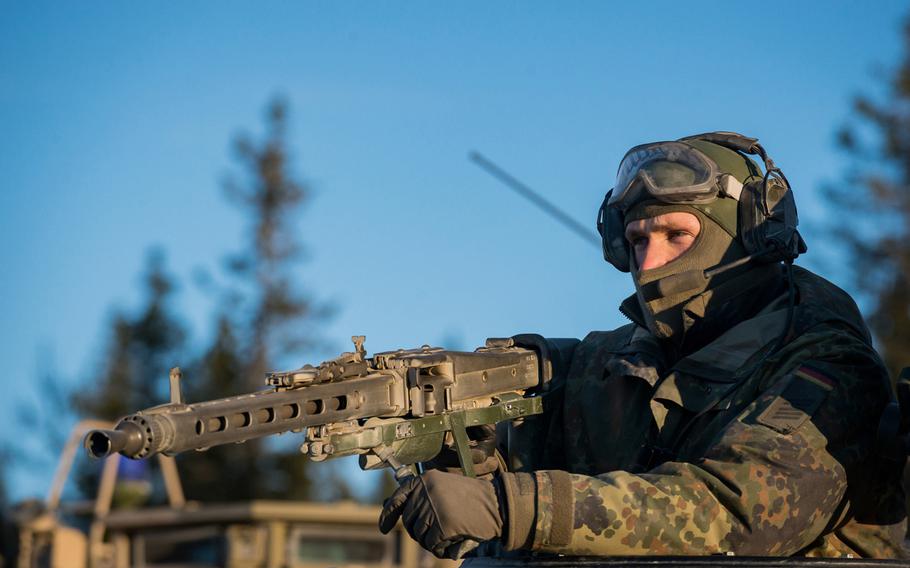 A German corporal with the NATO Readiness Joint Task Force trains with other NATO allies at the Rena training area in Norway on Oct. 27, 2018 during exercise Trident Juncture 18. The leaders of Germany and France have proposed setting up a European army. (Allied Joint Force Command)

A German corporal with the NATO Readiness Joint Task Force trains with other NATO allies at the Rena training area in Norway on Oct. 27, 2018 during exercise Trident Juncture 18. The leaders of Germany and France have proposed setting up a European army. (Allied Joint Force Command) 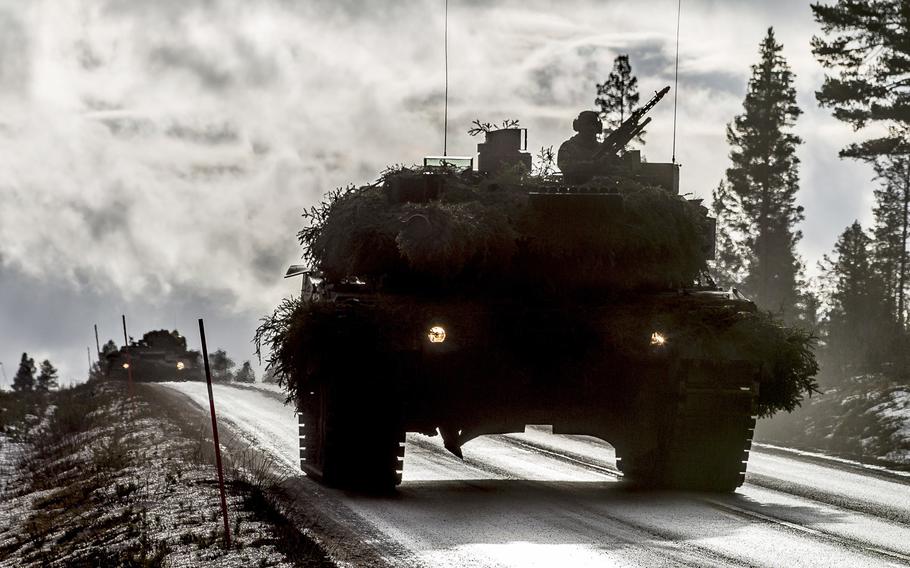 An armored platoon of the German Battlegroup attacks with main battle tank Leopard 2 from the Norwegian city of Engerdal towards Drevsjo during NATO exercise Trident Juncture in Norway, November 04, 2018. The leaders of Germany and France have proposed setting up a European army. (Marco Dorow/German Army) 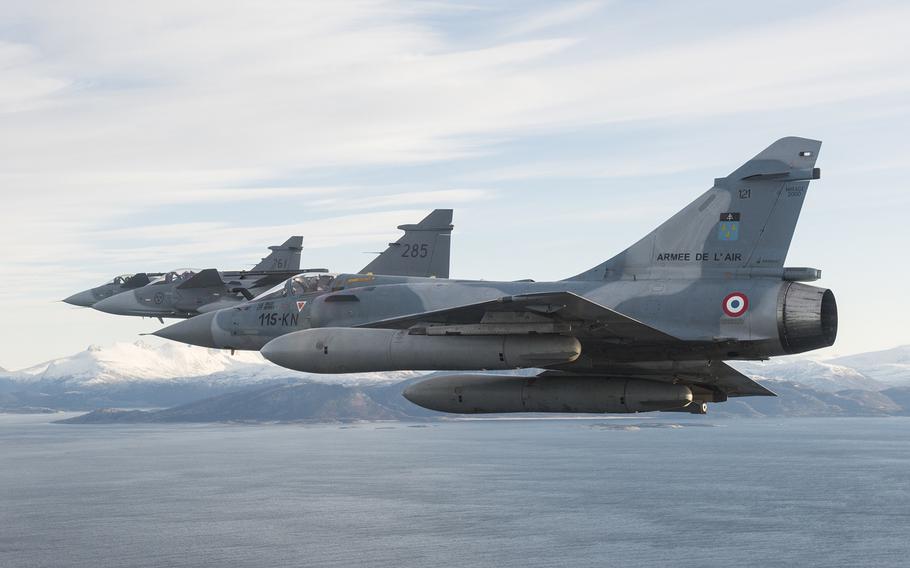 Three French Mirage 2000Cs fly in Norwegian airspace during the exercise Trident Juncture 2018 on Oct 28. German and French leaders have raised the possibility of setting up a European army. (Allied Joint Force Command) 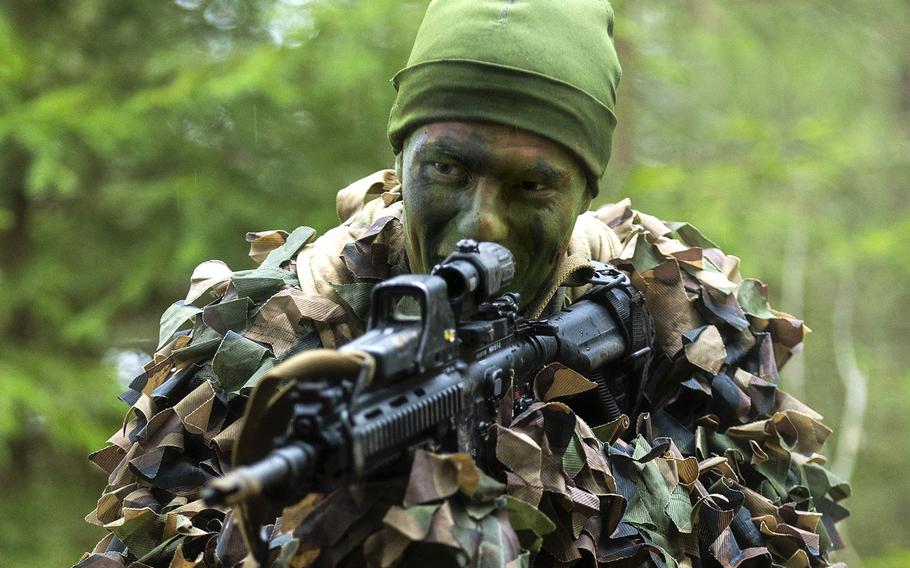 A soldier with the French Mountain Commando Unit secures a hideout in Camp Fremo, Norway on October 31, 2018 during Trident Juncture 18. German and French leaders have raised the possibility of setting up a European army. (Allied Joint Force Command)

STUTTGART, Germany — The U.S.-led NATO alliance warned Tuesday that the European Union should avoid competing with NATO as the key security pact on the Continent, after leaders in Germany and France raised the possibility of setting up a European army.

During the past year, NATO has sought closer ties with the European Union on security matters, but allies have also cautioned that the trading and political bloc should not undercut the 29-nation trans-Atlantic military alliance.

“I have been equally clear about the fact that EU efforts must not compete with NATO, must not duplicate NATO, because NATO remains the bedrock for European security,” NATO Secretary-General Jens Stoltenberg said Tuesday ahead of meetings with EU officials.

The idea of a European army has garnered increased attention in recent weeks after French President Emmanuel Macron and German Chancellor Angela Merkel touted the idea as a counterweight to a less reliable United States under President Donald Trump.

Macron, calling for a “true European army,” said earlier this month that “we have to protect ourselves with respect to China, Russia and even the United States of America.”

Trump ridiculed the idea, saying on Twitter that “perhaps Europe should first pay its fair share of NATO, which the U.S. subsidizes greatly!”

What Macron and his backers are proposing is a EU joint crisis intervention force that could be deployed in emergencies. But while the EU has long been involved in various security efforts and has deployed limited military contingents in the Balkans, Africa and elsewhere under the EU banner, it’s unclear how it would develop an intervention force capable of fending off the likes of China and Russia.

Any EU army would have to rely heavily on the armed forces of France and Germany, but Berlin has long struggled to meet its NATO defense spending obligations.

The result for Germany is a military that critics say is virtually non-deployable in a crisis. As of May, none of Germany’s submarines were operational, only four of its 128 Eurofighter jets were combat-ready and the army was short dozens of tanks and armored vehicles, according to various internal government reports. Troops also are short on the basics, such as body armor, night vision gear and cold-weather clothing.

Germany’s lack of combat readiness was brought into embarrassing focus in 2015 when photos emerged of troops training with broomsticks instead of guns because of an equipment shortage.

Still, Merkel last week again endorsed the idea of a European army, but added that it is years away from becoming a reality. “We have to create a European intervention unit with which Europe can act on the ground where necessary,” Merkel said.

So far, there are no concrete details on how such an army would be formed and what the command structures would be. But the bloc already has a military staff and other military components as part of its foreign policy and security establishment.

Stoltenberg said EU officials should remember that once the U.K. leaves the union, 80 percent of NATO’s defense expenditures will be derived from non-union members.

Stoltenberg also highlighted the role non-EU members play when it comes to guarding the Baltics and Poland. “Three of the four battle groups we have deployed in the eastern part of the alliance, in the Baltics countries and Poland will be led by non-EU allies,” he said.

Meanwhile, geography matters when it comes to security strategy in Europe, Stoltenberg said. Norway in the north, Turkey in the south and Canada, the U.S. and U.K. to the west all play key roles, Stoltenberg said.

"So geography and money, these are facts which we cannot ignore,” he said.