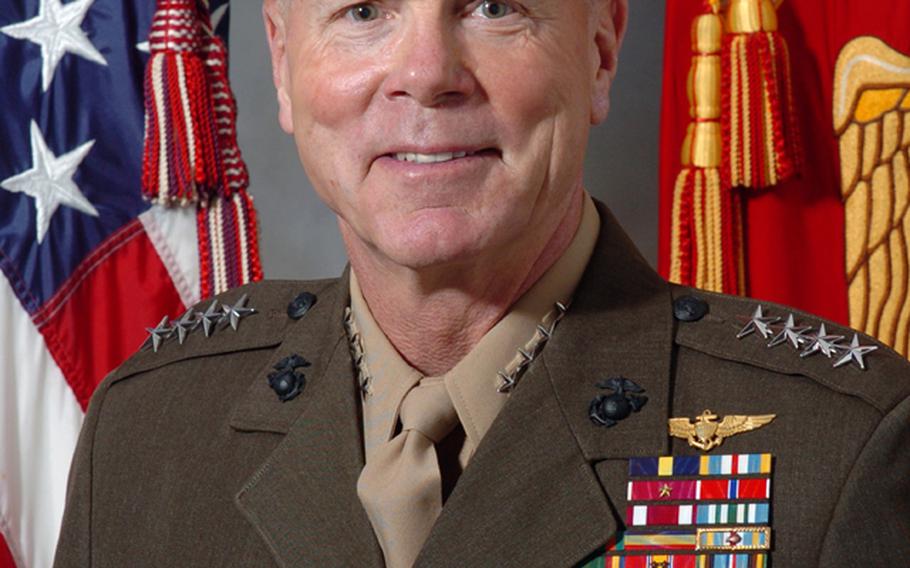 CAMP LESTER, Okinawa - The Marine Corps commandant said Saturday the controversial Osprey aircraft has not suffered a fatal accident in 10 years, despite the deaths of two Marines during a flight in Africa in April.

Gen. James Amos said the lack of such accidents should allay Japanese fears over the MV-22's safety. He defended the planned Osprey deployment here during a military radio address to the Marine Corps air station at Iwakuni, where the arrival of the first 12 of the helicopter-airplane hybrids was greeted by protest boats late last month, and the Marine base on Okinawa, where they are to be stationed.

The Marine Corps later told Stars and Stripes that the commandant did not misspeak.

"He was referencing the 10 years prior to April," when two Marines were killed and two seriously injured in a crash in Morocco, Marine spokesman Capt. Justin Jacobs said.

That crash was widely publicized in Japan, heating up public opposition to the deployment and prompting the Japanese government to seek a detailed explanation before allowing any flights in the country. The Okinawa governor has said the deployment could trigger a public call for the closure of all U.S. military bases here.

"The reality is it has been 10 years since we had our last fatal accident ... 10 years is a long time," Amos said in the radio address during a visit to Okinawa. "I mean it is good news."

Amos also said the aircraft is at the "rock bottom" for accidents when compared to other Marine Corps aircraft and only a few have superior safety records.

Statistics recently released by the service show the Osprey has a higher level of catastrophic accidents compared with the Sea Knight helicopters it is slated to replace on Okinawa but has fewer serious accidents than the fleet-wide average.

In June, the Japan defense ministry released a Marine Corps study of the Osprey deployment, which also provided statistics on the aircraft's safety that did not include the recent crash.

Tokyo says it plans to send teams of investigators to the United States to review the fatal crash in Morocco as well as other incidents with the aircraft, such as an Air Force training mishap in Florida this summer that injured crew members. The government has assured the Japanese public no flights will occur until the safety is confirmed.

The U.S. has also said the Ospreys will not fly until Japan is satisfied the aircraft is safe. The Ospreys only are grounded in Japan and continue to fly elsewhere in the world.

Hiroshi Ashitomi, spokesman for one of the organizers of a protest rally against the Ospreys planned for Sept. 9 in Okinawa, said Amos' comment was shameful, whether it was intentionally misleading or not.

"He is utterly indifferent to the concerns people here have toward the Ospreys," Ashitomi said.

The local opposition is animated by still-sharp memories of the 2004 crash of a Sea Stallion helicopter on the campus of Okinawa International University, adjacent to the long-embattled Marine Corps Air Station Futenma, which is to house the Ospreys.