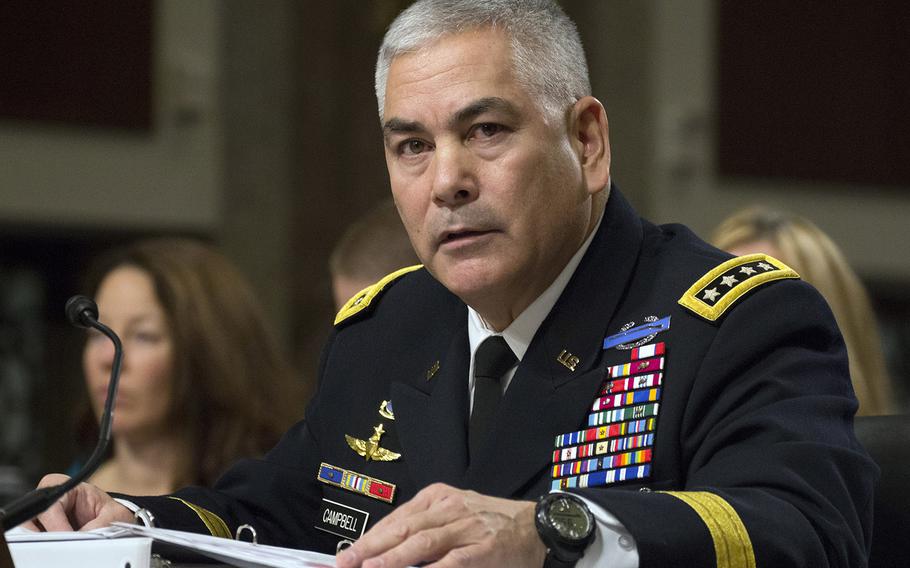 KABUL, Afghanistan ‑ As Afghan forces try to fend off attacks by resurgent militants, the top coalition commander has been meeting with NATO leaders to hammer out details of a plan that could keep thousands of international advisers in the country for years to come.

“There is overwhelming support to do something” to continue to aid the Afghan security forces,” Gen. John Campbell, who commands both NATO’s Resolute Support mission as well as the American counterterrorism force in Afghanistan, told reporters in Kabul on Saturday.

What exactly that “something” is remains to be seen, but Campbell said some thirty countries have voiced support for a continued international mission in Afghanistan. NATO leaders have said they are planning for a civilian-led military mission to continue after the current training and advising-focused Resolute Support mission expires at the end of 2016.

Campbell said as many as 1,000 troops supported by contractors and other civilians could remain in Afghanistan past 2016 to try to help Afghan security forces stave off attacks by Taliban and other insurgent groups.

“We’ve said all along that there are some capability gaps that need to be filled,” he said, adding that Afghan forces will likely need help with air support, intelligence, logistics, and leadership development for years to come. Future international aid will be based on requests from the Afghan government, Campbell said.

Afghan forces currently are locked in significant battles with insurgents across northern Afghanistan, in areas that have historically been relatively peaceful.

NATO officials assert that overall attacks by insurgents are down compared to a year ago, but acknowledge that casualties are much higher among security forces, civilians, and insurgents, highlighting the fact that the war is far from over.

In the northern provinces such as Kunduz, where Taliban forces have fought their way to the outskirts of provincial and district capitals, the violence is due to a variety of circumstances, Campbell said.

Among the factors he identified are Pakistani military operations that sent thousands of militants across the border into Afghanistan; Afghan operations in the south that drove militants north; a lack of leadership as the key Afghan army unit in the region went months without a commander; and a high levels of criminal activity such as drug networks.

Many of the casualties suffered by the Afghan forces are among local police, which are paramilitary units often undertrained and ill-equipped.

Many local police have been sent out to man remote checkpoints with no backup or support, making them easy pickings for raiding insurgents, Campbell said. “The Taliban have been taking advantage of that,” he said.

An additional factor fanning the flames of violence in the north is the increase of activities linked to Islamic State militants, Campbell observed. The jihadist group, based primarily in Syria and Iraq, has yet to make any significant operational moves, but recruitment and funding has become more noticeable, the general said. “Six months ago we didn’t see that,” Campbell said.

While the level of Islamic State influence is rising, Campbell said he has yet to hear reports of significant numbers of foreign fighters. Most fighters claiming allegiance to the Islamic State appear to be local Taliban and other insurgents “rebranding” themselves, he said.