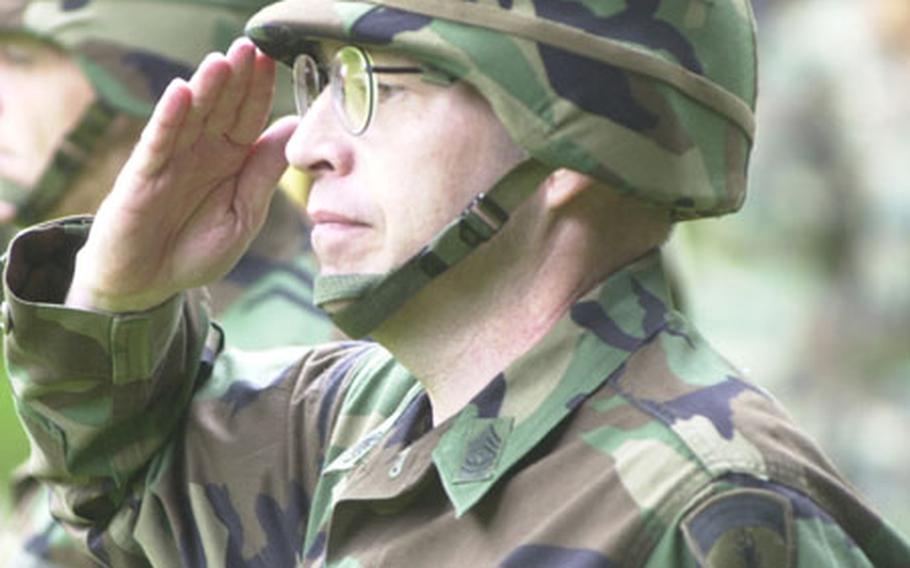 HEIDELBERG, Germany &#8212; Dark clouds had been hanging over the office of the command sergeant major for U.S. forces in Europe when David L. Lady took over the post on Feb. 10, 2000.

&#8220;It was bad time,&#8221; said Lady in a recent interview with Stars and Stripes. His predecessor, Command Sgt. Maj. Riley C. Miller, had been relieved five months earlier amid charges of sodomy and fraternization.

More than three years later, Lady left his post as the top enlisted soldier in Europe on Thursday with his head held high, mission accomplished, the clouds that brought a light rain in Heidelberg, Germany, that day parting with a burst of afternoon sunshine.

Lady moves on to become command sergeant major of the U.S. Army Space and Missile Defense Command in Arlington, Va.

Gravens, who Lady describes as a &#8220;tactical wizard,&#8221; served in the same capacity during Bell&#8217;s last assignment as the head of III Corps at Fort Hood, Texas.

Lady expects Gravens, like all senior enlisted soldiers, to focus much of his time on leader development. But with top-level discussions under way to overhaul size, shape and locations of U.S. forces in Europe, Lady said Gravens will also play a key role in helping shape how the changes develop.

In the meantime, Lady paid tribute to the successes of his noncommissioned officer corps in Europe during a gathering of top leaders who joined to wish Lady well and to welcome Gravens.

&#8220;We have policed our ranks and have disciplined and trained our soldiers,&#8221; Lady said. &#8220;Even more importantly, we have supported each other. Our guiding principle &#8212; that the senior levels of the NCO support chain exist to guide and assist, not to control or manage.&#8221;

Lady saluted the soldiers in 1st Infantry Division who developed a new Squad Leader&#8217;s Course and the NCOs in the headquarters staff for creating a new Information Assurance Program and those who helped create the V Corps&#8217; Small Arms Master Gunner training program, among others.

&#8220;To the sergeants who developed or helped in these innovations, I say great work. Now sustain the standard.&#8221;

Thanking a long line of official well-wishers at the end of the ceremony, Lady was among the last to leave, taking time to also thank nearly every soldier who was involved behind the scenes.