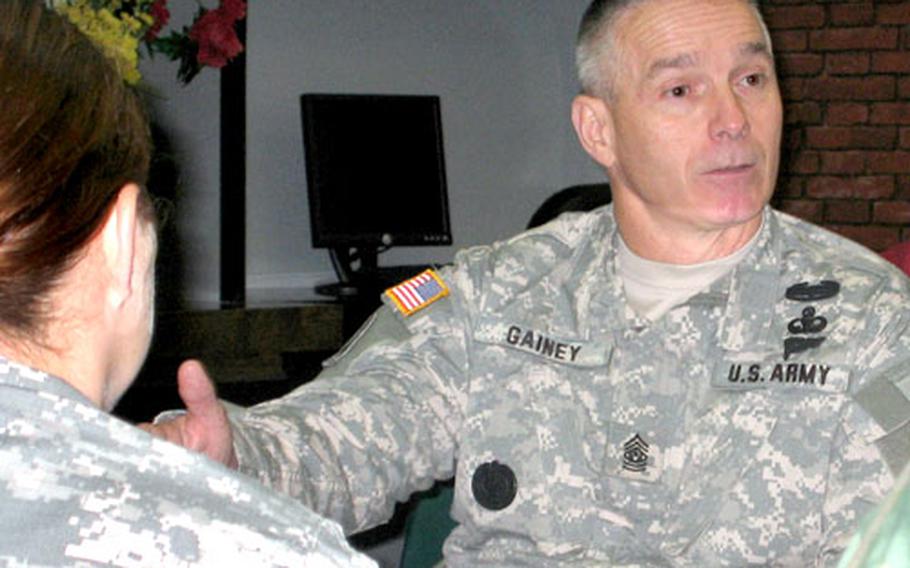 Army Command Sgt. Maj. William J. Ganey, senior enlisted advisor to the chairman of the Joint Chiefs of Staff, talks with servicemembers during breakfast at Kadena Air Base on Wednesday. (John D. Banusiewicz / Dept. of Defense)

KADENA AIR BASE, Okinawa &#8212; The U.S. military bases on Okinawa are a prime example of what &#8220;joint services&#8221; is all about, the senior enlisted advisor to the chairman of the Joint Chiefs of Staff said here Wednesday, according to a news release.

Stopping to visit various units on this sprawling air base, Army Command Sgt. Maj. William J. Gainey likened the Department of Defense to great-tasting apple pie, with the ingredients &#8212; the Army, Air Force Navy and Marines &#8212; all held together by the Defense Department&#8217;s crust.

Telling them that today&#8217;s servicemembers can expect to work across traditional service lines more often in the future, Gainey encouraged the servicemembers to &#8220;break the culture&#8221; of service parochialism.

During his time on Kadena, the largest U.S. base in the Pacific, Gainey toured the base deployment processing center, the 353rd Special Operations Group, the Army&#8217;s Patriot PAC-3 battalion and the noncommissioned officers&#8217; academy and had an off-the-record town hall meeting, according to the release.

He was expected to remain on Okinawa through Friday, visiting servicemembers at other bases on the island.

Gainey&#8217;s visit comes just after returning from a trip last month with Marine Gen. Peter Pace, the chairman of the Joint Chiefs of Staff, to China, where some eyebrows were raised, according to news accounts, when Pace included Gainey on every meeting, including dinners.

Including Gainey showed the Chinese a better understanding of the role of noncommissioned officers in the U.S. military, Pace said, according to the American Forces Press Service. &#8220;I think that resonated with the Chinese,&#8221; Pace said.

&#8220;Having him side by side with me was a projection to the Chinese of the whole cloth of the leadership of our armed forces.&#8221;