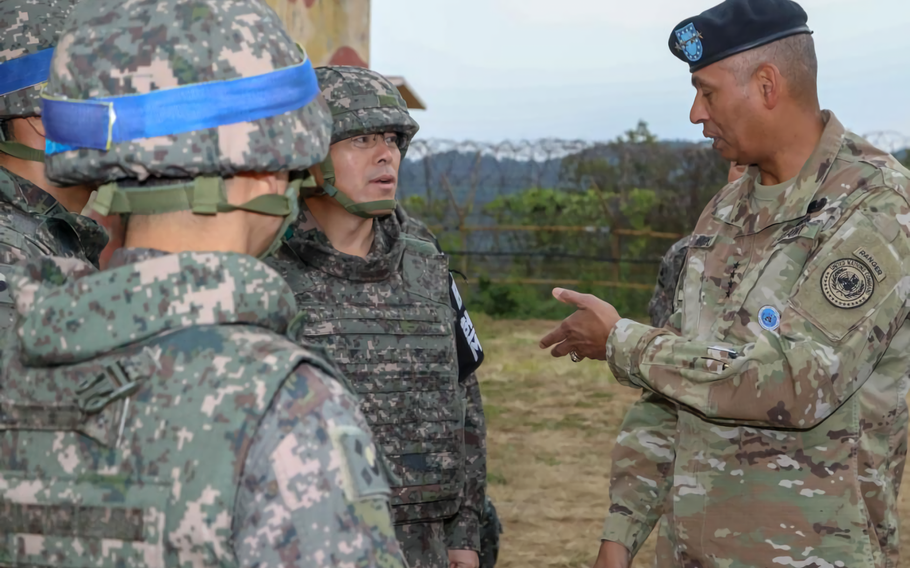 The top U.S. commander in South Korea offered his “full support” for the inter-Korean removal of land mines from the no man’s land that bisects the peninsula.

U.S. Army Gen. Vincent Brooks said Tuesday the demining operations will aid in efforts to recover the remains of troops killed during the 1950-53 Korean War as well as help ease military tensions with North Korea. He made the comments during a visit to the clearance area.

The two Koreas have agreed to start removing mines to clear a path to a front-line area called Arrowhead Hill, which was the site of some of the fiercest battles of the war.

Millions of mines have been planted in the Demilitarized Zone, a 2.5-mile wide, 155-mile long region that is also lined with barbed wire and guard posts.

Critics have expressed concern that the military moves, which include an agreement to remove guard posts, will weaken South Korea’s defenses.

“This effort to clear a route to the historic Arrowhead Hill has my full support,” Brooks said during the visit to the eastern border area, which is also known as Hill 281.

“Among the many agreed-to actions, this one is especially important because it will result in recovering the remains of the fallen during the Korean War,” he said in a press release. “The area around this hill contains the fallen from several countries, and returning them to their countries and families is a top priority for me.”

Brooks is the commander of U.S. Forces Korea as well as the United Nations Command, which oversees the southern side of the DMZ.

South Korean officials have said the remains of some 300 South Korean forces as well as troops from the United States and other countries that fought under the U.N. umbrella are believed to be buried in the heavily fortified area.

An unknown number of Chinese and North Korean troops also were likely lost during fighting at the site, which was previously unreachable.

The mine-clearance operation, the first such effort since the early 2000s, comes as the United States renews a diplomatic push to persuade the North to give up its nuclear weapons.

While progress on denuclearization has been slow, the two Koreas have begun a series of initiatives aimed at improving relations after decades of hostilities.

South Korean President Moon Jae-in, North Korea’s Kim and their defense chiefs agreed to remove mines from the DMZ during their third summit, which took place last month in Pyongyang.

The U.S.-led command welcomed the land mine removal, saying it will enable safe access for joint efforts to recover remains, prevent accidental clashes and build trust between the two Koreas.