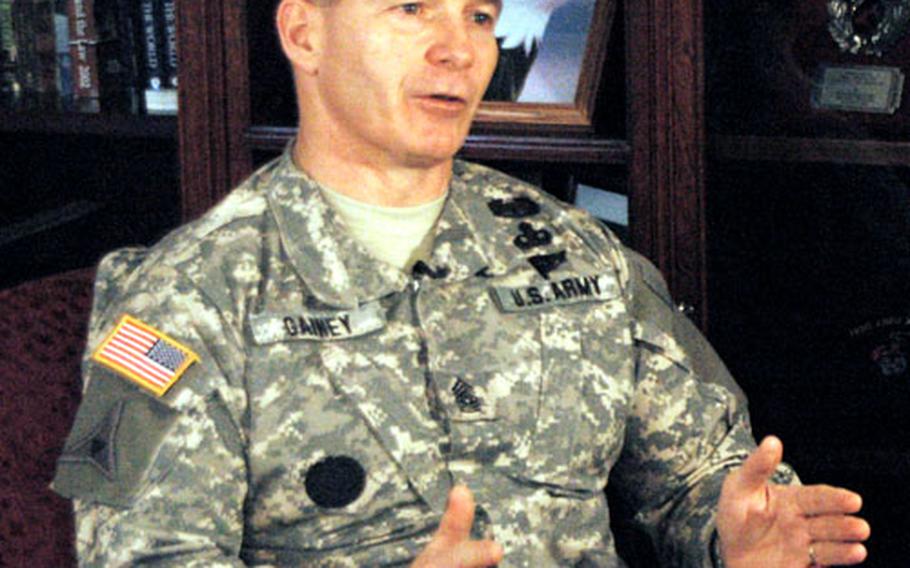 YOKOTA AIR BASE, Japan &#8212; The senior enlisted adviser to the chairman of the Joint Chiefs of Staff had a whirlwind tour of military installations around Japan, where he greeted troops and made site visits.

Army Command Sgt. Maj. William J. Gainey, who arrived last Tuesday, headed to Misawa Air Base in northern Japan before moving on to meet with sailors at Yokosuka Naval Base. He also was scheduled to be the guest speaker at Marine Corps balls for Camp Fuji and Iwakuni over the weekend.

In October 2005, Gainey was named to the newly created Pentagon position, emerging from a pool of 16 candidates. He&#8217;s responsible for advising Marine Gen. Peter Pace on matters of professional development for enlisted personnel within a joint environment.

&#8220;Our biggest challenge is learning each other&#8217;s culture,&#8221; Gainey said Wednesday during a media interview at Yokota. &#8220;We wanted to look at the lower levels first. You go from the lower level to make the men and women understand what&#8217;s going on.

All the service chiefs are armed with senior enlisted advisers but until last fall, no such liaison existed at the chairman&#8217;s level. After accepting the job, Gainey said, he made one thing clear.

Gainey and his team are on the road about 15 days a month, he said. At each stop, he shares four top goals with junior enlisted personnel: winning the war on terror, teamwork among the branches, joint education and quality of life.

His Pacific itinerary, stretched over six days, was so tight it didn&#8217;t even allow for jet lag.

He planned to meet Friday afternoon with Adm. Takashi Saito, Pace&#8217;s equivalent in Japan&#8217;s Joint Staff Office. He was to fly back to Washington on Sunday, then visit Afghanistan and Iraq later this month.