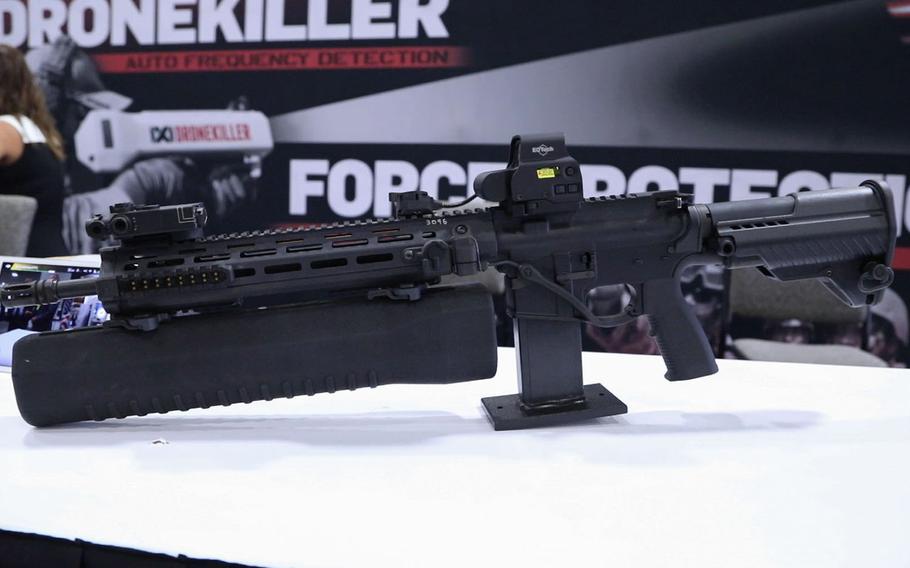 Buy Photo
On display during the 2018 Association of the United States Army annual exposition Oct. 8, 2018 in Washington, D.C., is the newest iteration of the IXI DRONEKILLER. This model can attach beneath the barrel of an M4 rifle and can both detect and disrupt a drone. (Video still capture by Caitlin M. Kenney/Stars and Stripes)

WASHINGTON — The five exhibition halls at this year’s Association of the U.S. Army annual meeting and expo form a maze of the latest technology, weaponry and prototypes. The rows and rows of displays, ranging from ammunition to a self-propelled howitzer, can be overwhelming.

So we scoured dozens of booths Monday and found a few cool gadgets that soldiers would love to get their hands on.

Need to see at night but don’t want to be burdened with heavy gear? The Harris Corp. F5032 Lightweight Night Vision Binocular has you covered.

It’s lightweight — just under 500 grams, where other binoculars can weigh up to 700 to 800 grams, said Christian Johnson, a senior manager with Harris Corp. Wearers can read maps within 9 inches, cutting the usual distance by half; and it has a long battery life.

Using a single AA lithium battery, Johnson said, “this goggle will last a full 24 hours of operational use.”

The goggles on display included a battery pack, which extends the operational use of the goggles to about a week.

Need an eye in the sky with the delivery capability and toughness to embark on rugged missions? The R80D SkyRaider by Aeryon Defense USA can help.

“We want to ensure that we’re giving the soldier something other than just a flying camera out in the field,” said Mark Holden, director of defense solutions at Aeryon Defense.

With its “Automatic In-Air Replacement” technology, if the small Unmanned Aircraft System has a low battery, another will automatically come to take its place, according to the product website.

The newest production unit of the aptly named Dronekiller by IXI EW is a counter-UAS system that can attach to an intelligent rail under the barrel of an M4 rifle, similar to a grenade-launcher attachment.

“By packaging the Dronekiller onto the I-Rail, it only adds about two pounds to what the soldier is already carrying,” said Michael Carter, CEO of IXI EW.

The Dronekiller can detect a drone up to 2 kilometers away and affect it up to 1 kilometer away.

“So if an attack by drone is being perpetrated on our troops, it will detect the inbound drone. All the soldier has to do is pull the trigger and it’ll control the drone and prevent the attack,” he said.

Like something out of a James Bond movie, the Tooth Comms Radio by Sonitus is a wireless tooth microphone that allows the wearer to communicate without getting in the way of masks or respirators.

“You can speak clearly with this while doing HALO (high-altitude, low-opening delivery) operations without having to scream, and everybody can hear you perfectly with no background interference of noise,” said Stephen Betts, the U.S. Army C4ISR account manager with Federal Resources, which had the tech on display.

Using bone conduction through the teeth to the inner ear, the wearer can “hear” without the need for earpieces, according to Sonitus.

It is being used by special operations forces for clandestine operations, Betts said.

The system includes a neck loop antenna that connects to the radio and can go under a shirt, as well as a push-to-talk box.

“It prevents jamming. ...You can fire at a rapid rate and you don’t have to worry about the ammunition itself catching or jamming,” said Kenric Nilsson, quality control with Standard Armament.

The flexibility of the chutes allows the gun to be mobile. He demonstrated the chute’s flexibility by tying it into a knot. SAI also produce chutes for the ejected ammo links.