Too late for an about-face in Heidelberg? 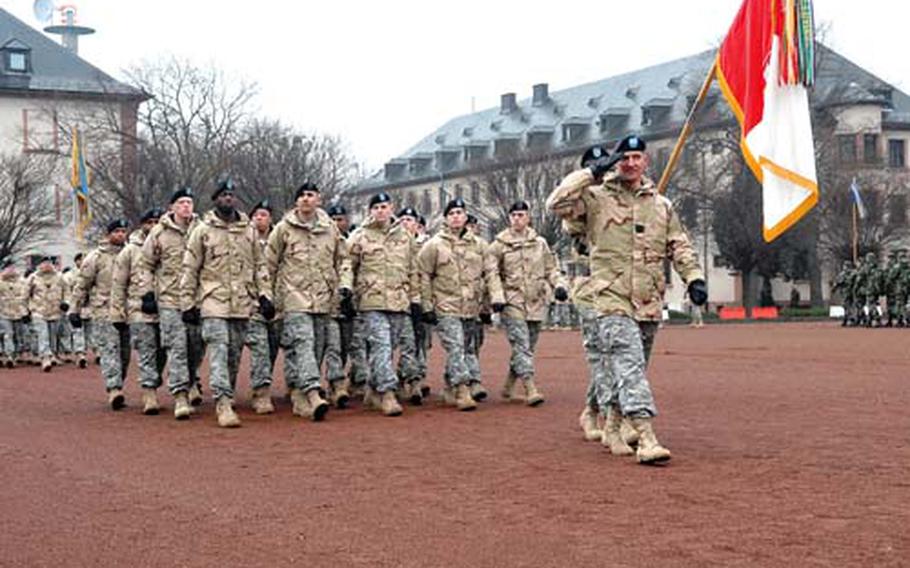 HEIDELBERG, Germany - Heidelberg&#8217;s lord mayor is on a mission.

His quest has taken him from ancient buildings in Baden-W&#252;rttemberg to the halls of the Pentagon and the U.S. Congress.

The mayor has met with U.S. deputy defense secretaries, Army generals and aides to U.S. Sens. Carl Levin and John McCain to press his case in his almost-perfect English: "What we really can&#8217;t understand is moving the oldest historical headquarters in Europe &#8212; not back to the U.S. &#8212; but just 80 kilometers north. The strategic reasons are not very clear to us," said Eckart W&#252;rzner, in an interview in his city hall office.

"It makes absolutely no sense to give up existing structures, especially in Heidelberg."

The picturesque city with the oldest university in Germany &#8212; one of the few cities left intact by Allied bombers in World War II, and not incidentally, the home to U.S. Army headquarters in Europe since 1945 &#8212; has grown fond of American soldiers over the past six decades. They are vital, he says, for the Heidelberg economy.

The Army has planned since at least 2004 to move USAREUR headquarters to Wiesbaden as part of consolidating a reduced American military presence in Europe. USAREUR public affairs officials say the plan is unchanged, pointing out in an e-mail that construction funding for new facilities in Wiesbaden has been "requested, programmed, and partially appropriated."

Among the projects expected to begin next month is a $130 million housing area just south of Wiesbaden Army Airfield, with 324 single houses, town houses, and duplexes, sports fields and children&#8217;s playgrounds &#8212; double the size of that planned originally, according to German newspapers.

But much has happened since the former USAREUR commander, Gen. B.B. Bell, devised the plan to move the command to Wiesbaden, including the near collapse of the worldwide financial system and a deep recession.

USAREUR has declined to put a price tag on the move, but W&#252;rzner says his people have run the numbers. He estimates the cost at $1 billion, plus 15 percent in cost-overruns.

"Use the money for more priority programs in the U.S., and stay where your roots are."

USAREUR officials, who most recently have said Heidelberg would close by 2012 or 2013, declined requests for interviews to respond to W&#252;rzner&#8217;s comments.

Unofficially though, some say that what will happen with planned transformation moves, in light of expected budgetary constraints, is an open question.

A story in a Wiesbaden newspaper about the construction projects noted that "The relocation of the headquarters from Heidelberg to Wiesbaden is still only a request from the U.S. Military that the Congress in Washington has yet to approve.

"Nevertheless, the beginning of the construction will launch a process that makes the present plan irreversible."

Once decisions are made &#8212; and especially once construction begins, momentum often takes over, W&#252;rzner acknowledged.

"Is the train on the track? I think the train is on the track. Has the train already left the station? We say no. And the engine has not enough coal to bring the train to Wiesbaden," he said.

"The situation at the moment is a little bit tricky," W&#252;rzner said. "There is a plan by the Pentagon. There have been discussions by Congress to spend money. But there was a big debate and it&#8217;s coming up more: Is it really necessary, is it acceptable in the new economic situation?"

The question doesn&#8217;t apply only to moving troops from Heidelberg, but from a number of other communities: Mannheim, for one, whose 5th Signal Command is also scheduled to move to Wiesbaden this summer. And last fall, plans were leaked to relocate several headquarters from throughout Germany to Sembach Air Base near Kaiserslautern after next year.

But USAREUR public affairs said recently those plans are still being studied.

In January, W&#252;rzner, along with the Baden-W&#252;rttemberg minister, the Mannheim mayor and several other government representatives, lobbied for Heidelberg in a whirlwind trip &#8212; six meetings in a day and a half &#8212; to officials in Washington.

"We met very open-minded parties &#8212; that was really our feeling," W&#252;rzner said. "They were very interested in getting more information."

"He is a big friend of Heidelberg," W&#252;rzner said. "He could not make me any promises at the moment."