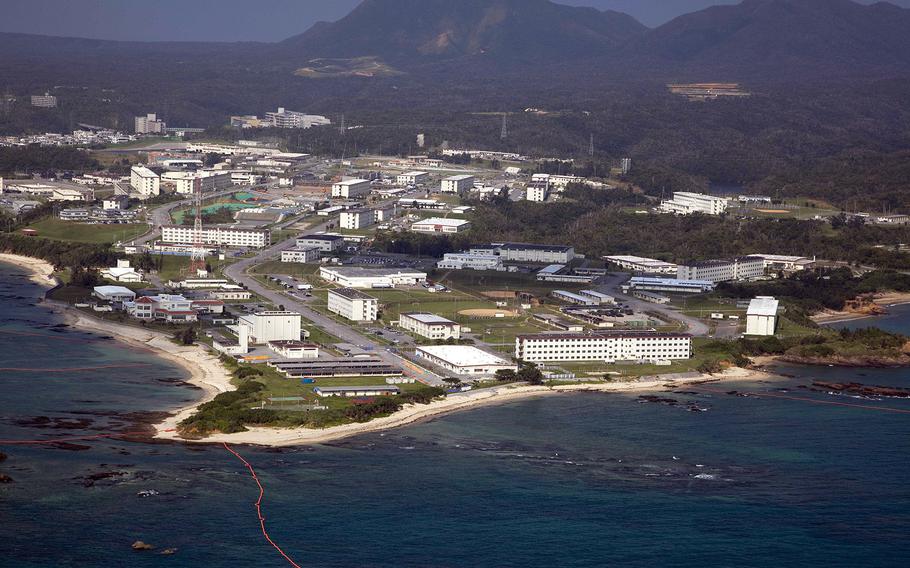 An aerial view of Camp Schwab, Okinawa. The governor of Okinawa has ordered a Defense Ministry branch to suspend all work at the site where a key U.S. military air base is to be relocated. (Jose O. Nava/III Marine Expeditionary Force)

CAMP FOSTER, Okinawa — Work to build a runway at a Marine Corps base went ahead Tuesday as Japan’s central government defied the Okinawa governor’s order to halt construction.

Crews are in the initial stages of installing the runway into Oura Bay at Camp Schwab, located at Henoko on the northern part of Okinawa. The project would allow closure of Marine Corps Air Station Futenma in a densely populated area in the island’s midsection and relocate its air operations.

On Monday, Gov. Takeshi Onaga gave the Okinawa Defense Bureau a week to stop all construction activities or lose its license for drilling work. Onaga, protesters and the local media have been railing for weeks that concrete blocks, positioned on the sea floor for a drilling survey, were damaging coral in the area.

Onaga said this week that the blocks were not authorized. He requested a survey to inspect the site but was denied by the Japanese government and U.S. military, a spokesman for the prefecture’s department of agriculture and fisheries said Tuesday.

The governor’s order drew a speedy and terse response from Tokyo, leading to what appears to be an inevitable showdown.

“Construction work, including the breaking of the sea bed; all of these procedures complied with relevant prefecture regulations,” Minister of Defense Gen Nakatani told a news conference Tuesday.

The ministry “has made thorough coordination with the prefectural government prior to the start of the work,” Nakatani said. “It is extremely regretful that such [an order] was issued. [The Ministry of Defense] will continue the drilling survey and other related work while giving utmost consideration to the surrounding natural environment.”

Closing Futenma has long been a priority of both the U.S. and Japanese governments amid growing safety concerns, but the move has drawn the ire of a small but vocal protest movement.

The election of Onaga as prefectural governor in November was largely seen as a referendum on the project. It has emboldened the protesters, who cite a series of concerns, from environmental considerations to a desire for a smaller U.S. military footprint on the island.

Onaga ran on an anti-base platform and vowed to halt the project, which was approved by his predecessor.

It remains unclear what his next step could be.

“I am resolved and I will move ahead without any hesitation,” Onaga said. “This is my second such order to halt the work, but this time it is more serious.”

Protesters have become more energetic and aggressive since his election, with persistent confrontations with base guards and Japanese Coast Guard vessels in the bay, harassment of military and non-military personnel, and bomb threats.