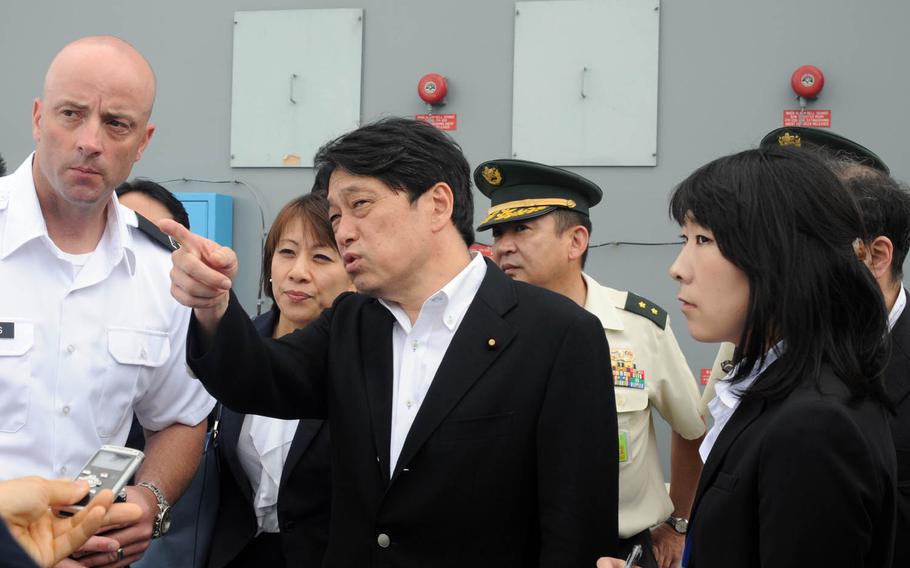 Minister of Defense Itsunori Onodera, center, said the Japanese government will move forward with a controversial U.S. military base relocation on Okinawa despite the discovery of an endangered species of coral at the site. (Kevin Krejcarek/U.S. Army)

CAMP FOSTER, Okinawa — The Japanese government plans to push forward with a controversial U.S. military base relocation despite the discovery of an endangered species of coral at the site, the defense minister said.

Itsunori Onodera’s comments — made Tuesday at the Ministry of Defense in Tokyo — were in response to a request a day earlier by Okinawa’s anti-base Gov. Takeshi Onaga to suspend construction on the runway being built into Oura Bay at Henoko’s Camp Schwab, which would facilitate the relocation and closure of Marine Corps Air Station Futenma.

“The Japanese Ministry of Defense will continue to give thorough consideration to the safety of the [construction] work, abiding by laws and regulations, giving full consideration to the natural environment and living environment to push forward the [relocation] construction to Henoko, for the earliest return of [U.S. Marine Corps] Air Station Futenma,” Onodera said.

The coral — called Porites okinawensis — was found during a July survey by the Okinawa Defense Bureau. A panel of Japanese government experts announced the discovery late last month. Japan’s Ministry of Environment said the coral is facing extinction, and has been included on the nation’s Red List of Threatened Species.

Despite the find and an unanswered government request to move the coral to another site, relocation construction has continued. Bureau officials said the coral will not be impacted by the work. Local officials remain skeptical.

The discovery appeared to play into the hands of Onaga, who has done everything in his power since his 2014 election to halt or stall the relocation, including a lawsuit over the breaking of coral at the site that was filed in July.

Onaga has also vowed not to sign any permits or agree to any requests that would facilitate the work, signaling that he may oppose requests to move the coral to another site or use the issue to stall or block the work.

On Monday, Onaga met with officials from the Okinawa Defense Bureau at the Okinawa Prefectural Office in Naha and requested that construction be suspended until discussions about the coral have taken place.

“The Okinawa Defense Bureau’s stance is inappropriate and insincere and I cannot overlook this [construction] to ensure the effectiveness of environmental protection measures,” Onaga said.

“Specific measures for [protecting] the environment have been appropriately and sincerely conducted with instruction and advice from an environmental monitoring committee,” a bureau spokesman said. “[The Defense Bureau] believes that the [ongoing construction] is not what the Okinawa Prefecture side points out as inappropriate and insincere.”

A spokesman for Onaga’s office said they were not considering adding the endangered coral issue to the lawsuit at the moment. However, an official from the Henoko Base Construction Countermeasures Division previously said that all available legal avenues would be explored.