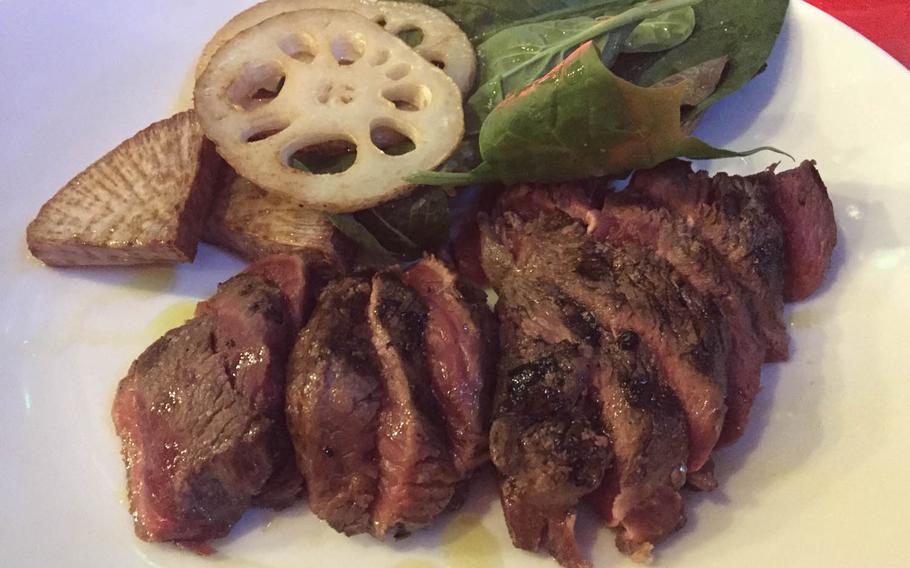 Grilled ostrich from Pan to Circus in Tokyo boasts a seriously meaty flavor. It was served with lotus root, beets, spinach leaves and three dips: mustard, sun-dried-tomato paste and Christmas Island salt from the South Pacific. (Aaron Kidd/Stars and Stripes)

Grilled ostrich from Pan to Circus in Tokyo boasts a seriously meaty flavor. It was served with lotus root, beets, spinach leaves and three dips: mustard, sun-dried-tomato paste and Christmas Island salt from the South Pacific. (Aaron Kidd/Stars and Stripes) 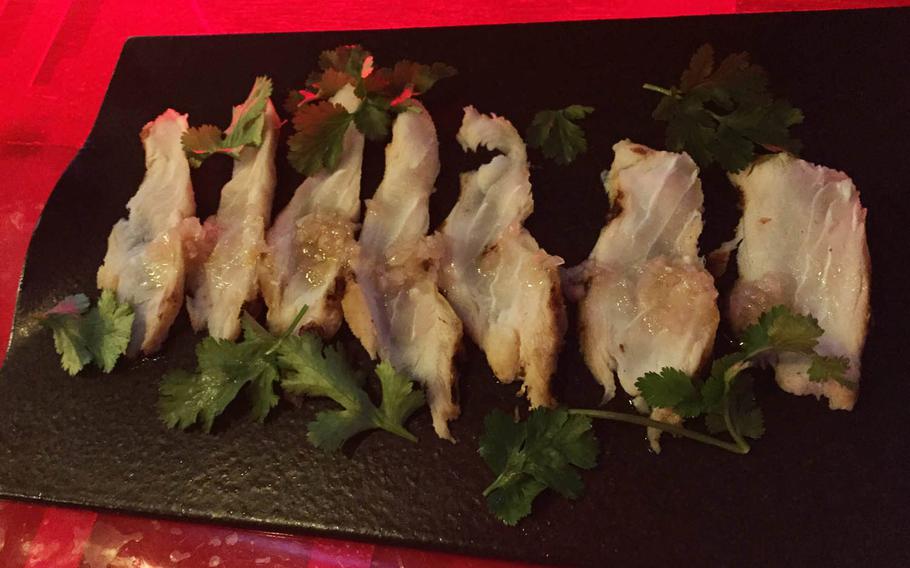 The alligator carpaccio from Pan to Circus, a Tokyo eatery specializing in game meats, was light, tender and full of flavor. (Aaron Kidd/Stars and Stripes) Pan to Circus in Tokyo provides diners with a free charcuterie plate that features thinly sliced ham and salami. (Aaron Kidd/Stars and Stripes) Pate de Campagne from Pan to Circus in Tokyo features a delicious mixture of cooked ground pork shoulder with just a hint of chicken liver. (Aaron Kidd/Stars and Stripes) 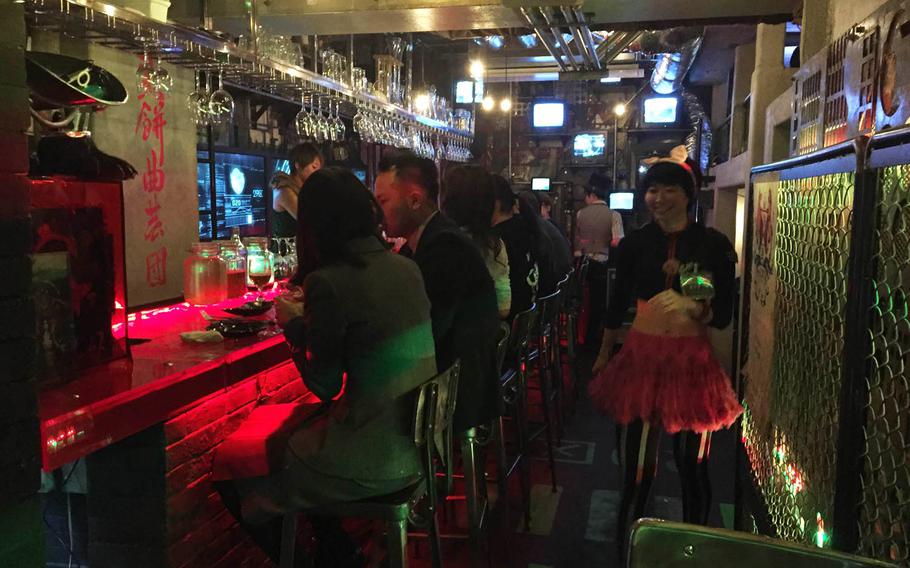 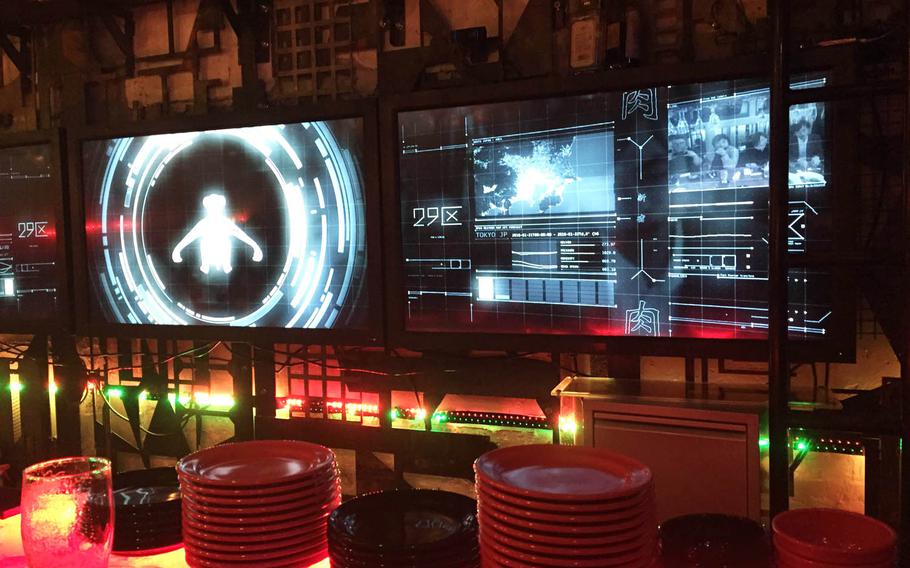 Behind the bar at Pan to Circus in Tokyo, flatscreen TVs recycle images of a revolving monkey, representing the year of the monkey, along with the number "29," which reads "ni-ku" in Japanese. "Niku" also means meat. (Aaron Kidd/Stars and Stripes)

That instinct stopped me in my tracks when I happened across Pan to Circus, a Tokyo eatery specializing in gibier cuisine — wild game meats like venison, boar, rabbit and alligator.

My party was greeted by a friendly waitress sporting a pink tutu, bare midriff and cloth pig ears who guided us to our seats at the stylish brick and chrome bar as opera played over the sound system.

Inspired by the Japanese manga and anime franchise “Ghost in the Shell,” Pan to Circus’ steampunk decor is like “Futurama” meets an old factory. Pieces of chain-link fence and metal hug one of the walls, while vintage televisions broadcasting black-and-white images going in and out of focus hang from another.

This place lays the symbolism on thick. Behind the bar, flat-screen TVs recycle images of a revolving monkey (no, they don’t serve monkey here; it represents the current year of the Chinese zodiac) along with the number “29,” which reads ni-ku in Japanese. Niku also means meat.

The bartender, wearing a brown fur stole, represented a bear, while a waiter decked out in a top hat, bow tie and vest dressed as a lion tamer.

The meal began with an on-the-house plate of charcuterie — cold cooked meats — that featured thinly sliced ham and salami. The flavor was a bit bland for my liking, and the dish could’ve been grocery-store luncheon meat for all I could tell.

We ordered Pate de Campagne for 1,000 yen (about $9), a delicious pate made from a mixture of cooked ground pork shoulder and just a hint of chicken liver. The dish was sprinkled with red peppercorns and black pepper and served with gherkins, spinach and an interesting, slightly sweet mustard.

Next we tried the alligator carpaccio (700 yen), which featured meat “from near the tail,” the lion tamer said. It was light, tender and super tasty. I’d eaten alligator before — breaded, deep-fried and served on a stick — but this dish is on a completely different level. Delicious and classy.

The finale and highlight of our meal was a large portion of grilled ostrich (2,300 yen) that boasted a seriously meaty flavor, not unlike roast beef. Served with lotus root, beets and spinach, the dish came with three “dips” for the tender and tasty medium-rare meat: mustard, sun-dried tomato paste and Christmas Island salt from the South Pacific, which really made the flavor pop.

Though they don’t appear on the menu, other exotic meats such as bear, horse and wild boar usually are available, the lion tamer said, so ask if these items pique your interest.

Less adventurous meat eaters have plenty of options, too. There’s Wagyu, a Japanese-raised beef with intense marbling known for its rich, distinctive flavor (6,000 to 15,000 yen), Angus T-bone steak (ask for current pricing) and a “World of Steaks” menu featuring beef from the U.S., Australia, New Zealand and Mexico (prices vary).

Oh, and don’t miss the decor in the bathroom, which is an experience in itself.

Pan to CircusAddress: 3-3-7 Shinjuku, 4F Shinjuku-ku, Tokyo. It’s a short walk from Shinjuku Station’s east exit. Cross the street near the Studio Alta building, turn right and continue for about 10 minutes. Turn left after passing a Mizuho bank branch, then take an immediate right. The restaurant is a few feet down on the right. Look for an orange sign with cow, deer and pig silhouettes.