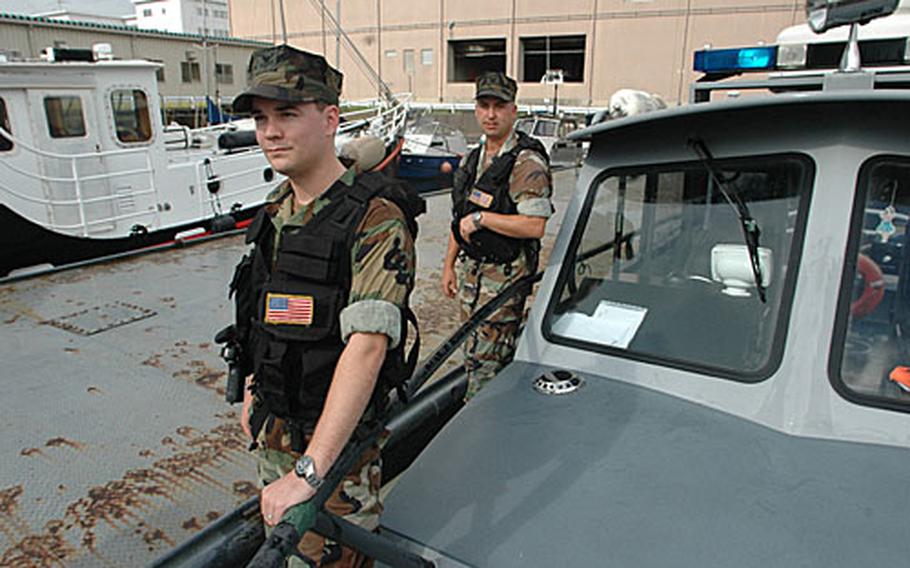 YOKOSUKA NAVAL BASE, Japan &#8212; When Yokosuka Naval Base&#8217;s Harbor Security responded to a call last Saturday about a sailboat being smashed against the rocks just outside Tokyo Bay, no one knew what to expect.

Typhoon Fitow was still far out to sea, but its slow-moving approach was churning five-foot swells as Petty Officer 2nd Class Jason Dillon and Petty Officer 3rd Class Steven Jacks fired up the motors of their 34-foot patrol boat and headed out.

When they arrived on the scene, they were shocked to find seven Americans, four children and three adults, being thrashed against the sea wall inside a slowly sinking 35-foot sailboat.

The passengers were shouting and pointing as the patrol boat pulled alongside.

&#8220;Everyone was screaming that the captain was stuck on a buoy,&#8221; Dillon said. Turning in the direction of the pointing fingers, the sailors could make out a person clinging to a yellow channel marker 500 yards away.

Timing their actions to avoid the roughest waves, Dillon and Jacks evacuated the sailboat&#8217;s passengers as the rocks tore huge gashes into the stricken boat&#8217;s hull.

Once the passengers were aboard, Dillon and Jacks rescued the captain from the buoy and brought them all safely to Yokosuka.

&#8220;Apparently the captain jumped overboard attempting to retrieve a bucket that was for the female passengers to relieve themselves in,&#8221; Dillon said. &#8220;I have no idea why someone would go sailing in seas like that, let alone jump overboard for a bucket.&#8221;

The sailboat, which Dillon and Jacks secured to the rocks with lines to keep it from being a navigation hazard, broke up into several pieces and was recovered by the Japanese coast guard the following day.

Base officials would not release the names of the people on the sailboat, saying only that none was connected to the the U.S. military.

Back at base, Dillon said the whole event was summed up by a 6-year-old boy who was rescued.