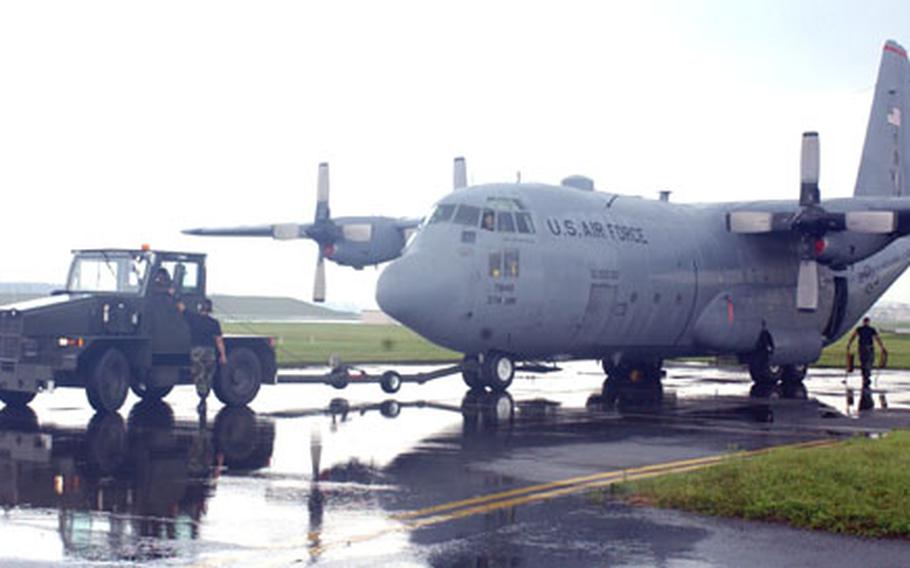 Bases in the Tokyo area went to Tropical Cyclone Condition of Readiness 1 &#8212; the highest weather warning level &#8212; early Tuesday in preparation for Tropical Storm Banyan, which hit the Kanto Plain on Tuesday evening.

Nonessential base personnel were sent home at noon and facilities closed at 1 p.m. at Yokosuka Naval Base, according to base officials. Regular appointments at the U.S. Naval Hospital there were canceled. A dining facility and one food court remained open.

On the base information channel, Yokosuka Naval Base Commander Capt. Gregory Cornish told residents to expect winds of 40 to 50 knots (46 to 57 mph) and three to four inches of rain on Tuesday evening.

He said damage at Yokosuka more often is caused by flooding and rain than wind but asked residents to secure items that could cause damage if whipped up by winds.

Nonessential personnel were sent home at Naval Air Facility Atsugi at noon to avoid a pre-storm traffic rush and facilities there closed at 2 p.m., officials said.

Most of Atsugi&#8217;s aircraft are under way with the USS Kitty Hawk near Guam, according to the Navy, but remaining aircraft and equipment were secured.

A few Yokota Air Base facilities closed early, but the commissary and exchange remained open for regular hours. The wing commander allowed nonessential personnel to leave work at 2 p.m., according to a base spokesman. Several aircraft left the area Monday to avoid the storm, officials said, and other equipment was secured inside hangars.

Any storm-related damages at Yokota should be reported to the 374th Civil Engineer Squadron at DSN 225-9476, the base spokesman said.

Camp Zama was expecting to close some facilities an hour early Tuesday evening but no other changes were expected, officials said.

U.S. Forces Japan declared TCCOR 1 Tuesday morning, meaning destructive winds of 50 knots or greater were anticipated within the next 12 hours. USFJ reported that since destructive winds were not expected during normal business hours, routine operations could continue during the day.

By 1:30 a.m. Wednesday, 16 inches of rain had fallen in some coastal areas. Four men in central Japan were injured in separate incidents, some slipping off the roofs of their homes as they tried to make repairs before the storm hit.

None of the injuries were life-threatening, police said.

About 320 people were evacuated from their homes around central Japan amid concerns about landslides, public broadcaster NHK reported.