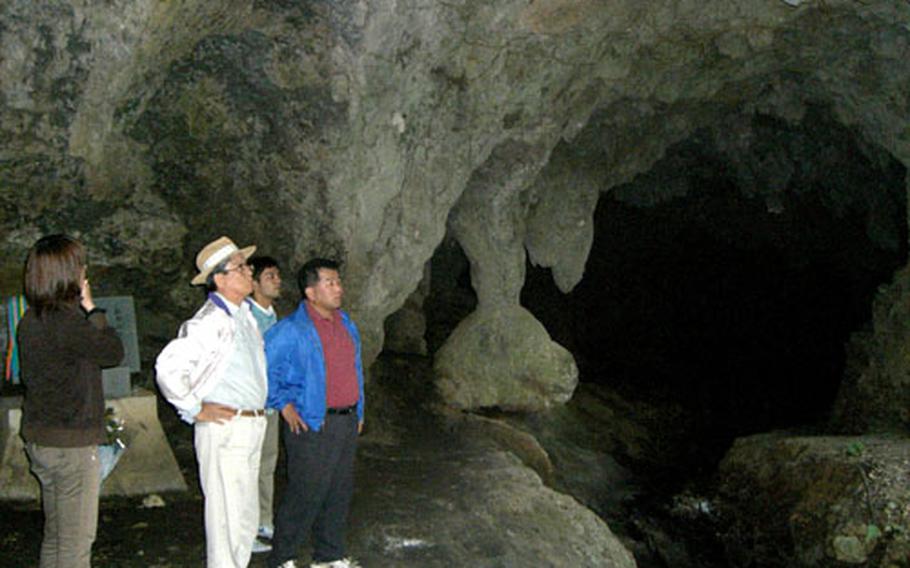 Haruo Chibana shows his young neighbors Shimuku Gama, a cornerstone of Yomitan’s Namihira district’s history. Residents used the cave as a bomb shelter during World War II. On the day U.S. forces landed Okinawa’s main island 62 years ago, 1,000 residents were about to commit mass suicide in fear of massacre by the “American beast,” but two men with firsthand knowledge of Americans averted the act. (Chiyomi Sumida / S&S)

CHATAN, Okinawa &#8212; Critics of the Ministry of Education&#8217;s order to whitewash the Imperial Japanese Army&#8217;s role in ordering mass suicides during the Battle of Okinawa won a battle of their own last week.

In the controversy surrounding the decision by the ministry to delete mention of the military&#8217;s involvement in the suicides from seven school textbooks, the central government admitted Tuesday that some civilians did die under direct military orders.

But the position paper stated the deletion in future textbooks stands.

&#8220;Some cases were regarded as victims under the military&#8217;s orders,&#8221; the statement says. &#8220;[However] textbook screeners gave appropriate opinions on textbook expressions that might trigger misunderstandings over the Battle of Okinawa.&#8221;

The screeners asked for changes to descriptions of the suicides that claimed hundreds of lives. The original texts stated the Okinawans had been &#8220;forced by the Japanese military&#8221; into killing themselves, many with grenades provided by soldiers.

The education ministry&#8217;s decision, released in April on the 62nd anniversary of the World War II U.S. invasion of Okinawa, drew protest resolutions from all 41 of Okinawa&#8217;s municipalities and the prefectural assembly. More than 70,000 signatures were collected on a petition the local high school teachers&#8217; union circulated, and several rallies were held.

On Wednesday, a delegation from the prefectural assembly was told there was nothing the Education Ministry could do to reverse the textbook screeners&#8217; decision.

The refusal is seen as a slap in the face of survivors of the battle.

&#8220;It is wrong to delete the description of military involvement only because there were some cases where suicides were committed without direct military orders,&#8221; Nagateru Ohama, the mayor of Ishigaki, told the Ryukyu Shimpo. &#8220;There are survivors who heard military orders.&#8221;

Toshinobu Nakazato, chairman of the Okinawa prefectural assembly, said the evidence of military involvement in the suicides is irrefutable.

&#8220;The textbook screeners might insist their argument is based on situations where district mayors distributed hand grenades to residents,&#8221; he said. &#8220;However, the hand grenades themselves would not have been available unless the military issued them.&#8221;

Such was the case on Zamami Island, where the deputy mayor at the time of the battle told his family that military officers ordered him to tell the island&#8217;s residents to &#8220;choose an honorable death&#8221; when the enemy landed.

His story was revealed recently by his two sisters, Haruko Miyahira, 80, of Zamami, and Tokiko Miyamura, 75, of Okinawa City. Their brother, Seishu Nakazato, committed suicide.

Miyahara told the Okinawa Times that she remembered her brother telling their father, &#8220;We were told by the Imperial military to die rather than surrender to the enemy. It is no doubt of the enemy landing the island. It is an order by the state. Let&#8217;s die together for honor.&#8221;

Their father was against the suicides and persuaded other family members to remain in their hiding place in a cave when the Americans landed on March 25, 1945. But her brother went to another cave where 67 people killed themselves.