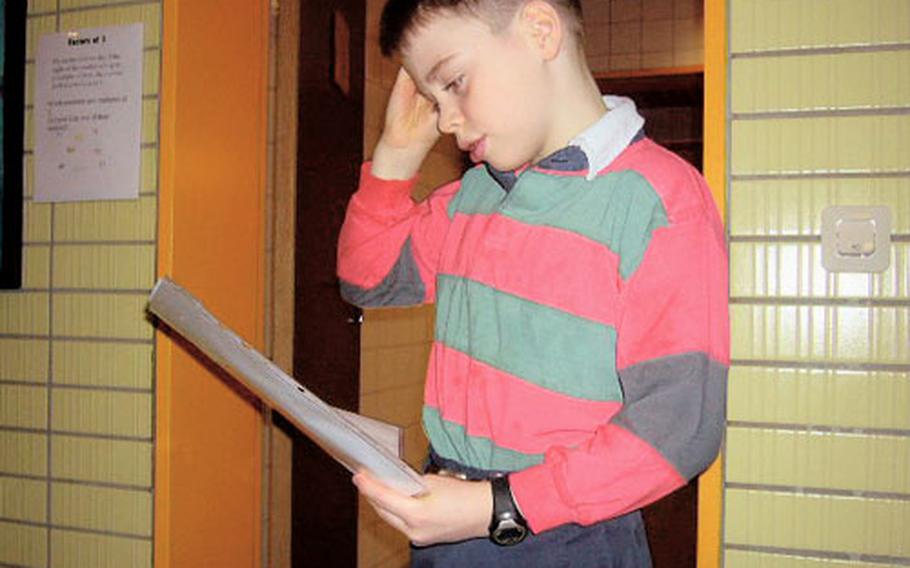 Isaac O’Neil, 9, ponders one of his favorite math problems, which he got out of one of the stalls in the boy’s restroom at the Darmstadt Elementary School in Germany. (Jessica Inigo / S&S)

DARMSTADT, Germany &#8212; The Darmstadt Elementary School staff likes it when pupils have accidents in the bathrooms &#8212; or anywhere else for that matter.

In fact, school principal Russ Claus is spearheading an effort to make accidents more commonplace throughout the school.

The effort is called &#8220;accidental learning,&#8221; and it works by putting up math problems in otherwise unused spaces. The hope is to catch a child off guard and sharpen his or her skills without the youngster even knowing it.

Claus said he got the idea from stateside restrooms that used the blank space above men&#8217;s room urinals as an area to get in a good sports read or a funny advertisement.

So, he came back to the school armed with mathematical word problems, placed them in plastic sleeves and taped them at pupil height above urinals, on the walls of restroom stalls, near sinks, and at the entrances.

Rebekah McNichol, a paraprofessional at the elementary school, has taken over the duties of making fresh and fun math problems on a regular basis to keep the cycle of learning alive.

It&#8217;s not all just about accidental learning, though. Sometimes the elementary school staff likes when it&#8217;s done on purpose, too.

As part of the Making Math Matter program at Darmstadt Elementary School, children are tackling problems all over the place.

The Problem of the Week program allows pupils to test their knowledge and choose between a primary or graduate problem and then submit it for review.

A family math night is coming up Feb. 16, focusing on math standards in a game format. That way, it&#8217;s fun for the whole family, Claus said.

Even the military thinks math matters, as troops from the 39th Finance Battalion, out of the 233rd Base Support Battalion, come out for weekly visits to be math mentors.

Pupils in fourth and fifth grades could participate in the before-school Math Challengers programs on Tuesdays from 7:30 to 8:15 a.m.

With the Measuring Up program, classrooms use an indoor-outdoor thermometer to chart temperature changes and teachers put up yardsticks so things can be measured when needed throughout the day.

Finally, a Mathematics Hall of Fame highlights pupils&#8217; research, as well as a 3-D interactive display with sound and games.

This all shows, with or without accidents, math truly matters, according to Claus.