J. Waite "Slabo" Bacon, torpedo squadron intelligence officer, briefs pilots and crew in their ready room before a strike. The room was blown apart when Ogawa&#39;s plane crashed into the Bunker Hill. (Courtesy of the author)

J. Waite "Slabo" Bacon, torpedo squadron intelligence officer, briefs pilots and crew in their ready room before a strike. The room was blown apart when Ogawa&#39;s plane crashed into the Bunker Hill. (Courtesy of the author) 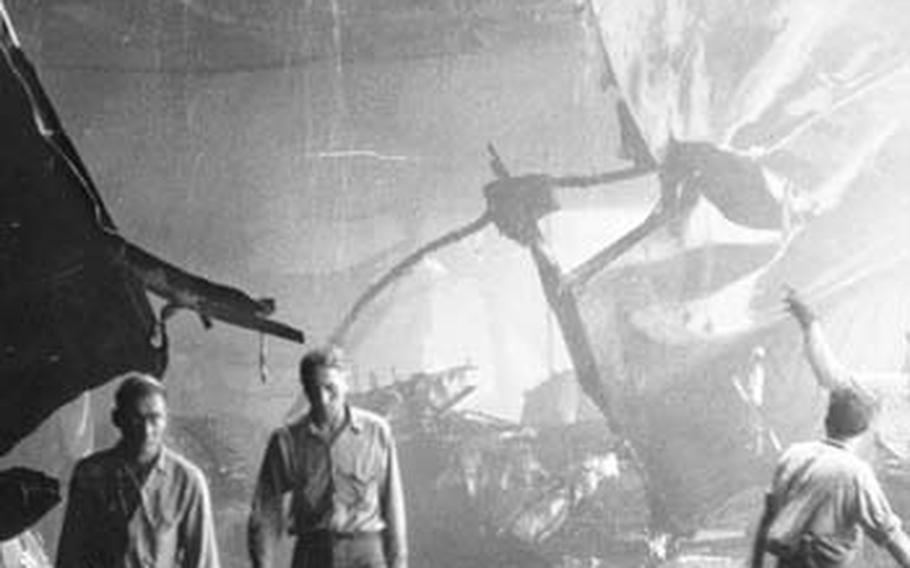 Crew members clean up wreckage and the dead after the crash. (Courtesy of the author) 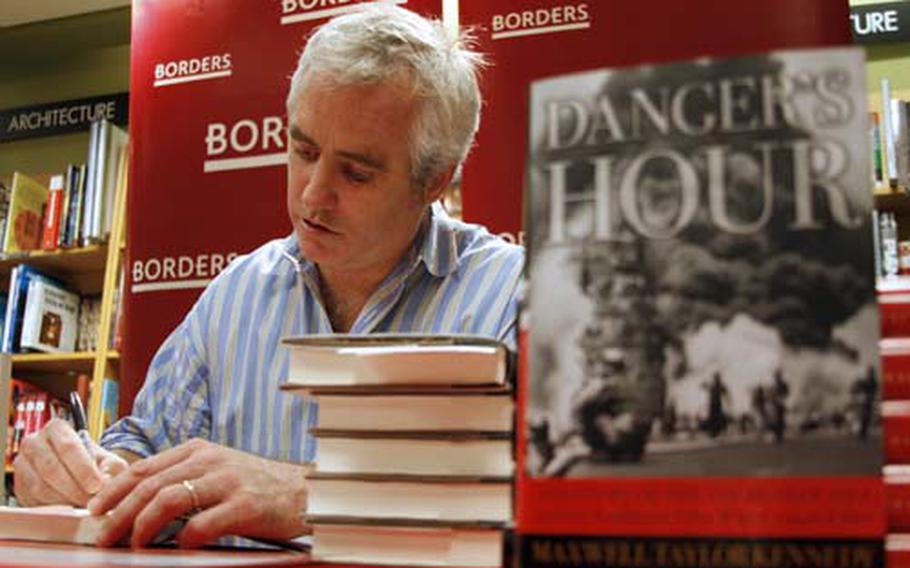 Kiyoshi Ogawa poses for a picture in his school uniform. The Kamikaze pilots were recruited from a group of gifted students. (Courtesy of the author) The writing on the photo reads: 1 p.m., second lieutenants Tanaka (right), Yano (center) and Tetsuka (left) look at a photo album of Toho Hana-gumi, a musical singer and dancer performing at Toho, a music hall at the central Ginza district in Tokyo. (Courtesy of the author)

It is an eerie moment frozen in time.

A gray blip on a screen &#8212; an airplane about to fly into a giant structure, filled with thousands of people, already engulfed in flames from the plane that struck a few minutes before.

The exact time of 10:02 a.m. on May 11, 1945, has been replayed over and over by those who experienced its horrors. It was the moment when Japanese kamikaze pilot Kiyoshi Ogawa flew his plane into the USS Bunker Hill, killing 393 Americans aboard the aircraft carrier. It was the deadliest suicide attack against the U.S. until Sept. 11, 2001.

The story of the kamikaze pilots has lessons for today&#8217;s armed forces, according to Maxwell Taylor Kennedy, who recently wrote "Danger&#8217;s Hour: The Story of the USS Bunker Hill and the Kamikaze Pilot Who Crippled Her."

"As America struggles to come to terms with a global war on terror, and the reality of suicide bombings around the world, it is vital to understand the cultural forces that can overcome the basic desire to survive," Kennedy said.

Kennedy first became interested in the kamikaze pilots after the attacks on Sept. 11. "I wanted to figure out how an organization like Al-Qaeda could convince a large group of people to kill themselves," he said. "And then I realized the Japanese had done this before."

Kennedy spent the next five years poring through reports and interviewing the survivors of the Bunker Hill. He also spent three months in Japan tracking down the families of the kamikaze pilots and studying Japanese history and literature.

"You cannot understand Japan without reading its literature," he said.

The book is laced with Japanese poetry and terminology, such as "Sen-jin kun," the code of battle that favored suicide before surrender; "tokkotai," special attack corps; and "kamikaze," which refers to the "Divine Wind" that protected Japan from invasion in the 13th century. The final chapter discusses the "Yosegaki," the banner that the pilots signed with poems before they departed on their suicide missions.

The result of Kennedy&#8217;s extensive research is a beautifully crafted, realistic portrayal of a complex war that includes moments of courage and cowardice on both sides. Using rich historical context, the author delves into the psyche of the enemy and comes up with a startling realization. The lines between "us" and "them" are not so clear.

Overall, the book contains enough facts and details to quench the thirst of an avid history buff, yet enough narrative and background to keep someone who&#8217;s never heard of the Bunker Hill turning the pages as if it were a novel.

The first half of the book sets the stage for disaster. Kennedy establishes a deep cast of characters, mainly the Japanese students who were recruited to become kamikaze pilots and the American pilots and crew aboard the Bunker Hill. The ship itself becomes a character, too &#8212; female of course, with her own birth and near death.

The story line flips back and forth between the Japanese and the Americans, telling parallel narratives until they literally collide halfway through the book. Mixing the perspectives, it is hard not to notice similarities between these men who fought on opposite sides of a war.

"I didn&#8217;t start out sympathetic to him," said Kennedy of Ogawa. But, after many conversations and flipping through photo albums, Kennedy realized, "This guy was totally normal. He was an athlete. He was funny. He was a happy kid."

Photos included in the book show Ogawa standing under cherry blossoms and goofing around with his military friends. In what is perhaps a scene of universal humanity, one photo shows young Japanese soldiers crowded on a bed looking at pictures of pinup girls.

Kennedy admits that his humanizing of the kamikaze pilots may be difficult to handle, especially for the families of those aboard the Bunker Hill.

"I think they will probably be upsetting for the civilian families," he said of the photographs. "I almost didn&#8217;t include them. But the guys on the ship seem really interested to know what it was like on the other side."

The second half of the book tells what happened on the Bunker Hill after the planes hit the ship.

Through extensive interviews and official reports, Kennedy reconstructs the attack and its aftermath, second by second. Just before the crash, Ogawa sent a final Morse code. "I have found the enemy vessels &#8230; Now, I am diving into the ship."

Like a terrifying "Groundhog Day," "Danger&#8217;s Hour" replays the crash in slow motion as it was experienced by men on and off the ship: pilots watching helplessly from above; men ducking to avoid shrapnel from exploding planes in the hangar; or the chief engineer keeping his cool in an office 28 feet below deck.

The details are so vivid that readers feel as if they are experiencing it themselves, crawling along a molten floor to suck the dwindling oxygen off the ground or jumping &#8212; as one pilot did &#8212; into the shark-infested water below. One pilot ripped the life rafts out of his plane and dropped them to men in the water, risking his own life and plane, which was dangerously low on fuel.

The book successfully recounts these acts of bravery without shying away from the grotesque facts of war. Some passages describe in cringe-worthy detail what happens to a body when it burns or is starved of oxygen.

The accounts of horror and heroism in "Danger&#8217;s Hour" would hardly be believable if it weren&#8217;t for the photo evidence in the book. The Bunker Hill was carrying about two dozen journalists who were on hand "to capture significant events in the life of the carrier." The book includes about thirty photographs, including one recently released image of Ogawa&#8217;s plane moments before it hit the already flaming carrier.

Despite the obvious similarities to today&#8217;s suicide bombers, Kennedy is quick to point out the differences.

"The kamikaze pilots always fought in uniform against military targets. The Islamic fundamentalists are targeting their own people, they are targeting civilians and they are never, ever in uniform," he said. "But that doesn&#8217;t mean the solution can&#8217;t be similar."

Kennedy believes what he learned about the Kamikaze pilots is grounds for optimism. "The great lesson is, these guys now love the United States," he said. "It&#8217;s not the Gap jeans, it&#8217;s not the McDonald&#8217;s hamburgers or the rock and roll music. It&#8217;s the feeling that we, as Americans, can come together and accomplish anything. It makes me believe that as the Islamic countries become exposed to Americans and see what we&#8217;re really like, that anger will dissipate."