To meet goal, DOD must send nearly 370 MRAPs per month to Iraq 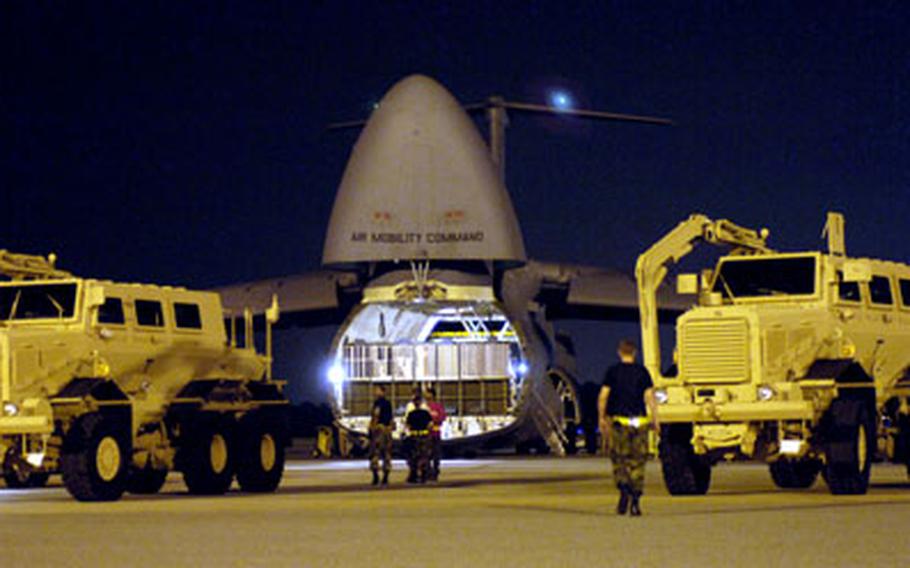 ARLINGTON, Va. &#8212; The Defense Department has to send nearly 370 Mine Resistant Ambush Protected vehicles per month to Iraq in order to meet its goal for 2007.

That is almost four times the number of vehicles the Pentagon was able to send to Iraq in September.

Known as MRAPs, the vehicles have V-shaped hulls that deflect blasts from underneath. They have proven to hold up better against roadside bombs than up-armored Humvees.

The Defense Department originally hoped to send 3,500 MRAPs to Iraq this year, but later revised that estimate to 1,500.

As of Oct. 2, about 390 MRAPs have been sent to Iraq so far this year, said Defense Department spokeswoman Cheryl Irwin.

Industry delivered 365 MRAPs to the government in September, but U.S. Transportation Command flew just 101 of the vehicles to Iraq that month, Irwin said.

Irwin explained that before MRAPs can be sent downrange, they need to have extra equipment such as radios installed at the Space and Naval Warfare Systems Center in Charleston, S.C.

The average time it takes for MRAPs to get through SPAWAR is about 30 days, down from 50 days initially, Irwin said.

"SPAWAR is trying to reduce that time period as we progress," Irwin said.

In August, the Marine general officer in charge of procuring MRAPs for all of the services said there was no bottleneck at SPAWAR.

&#8220;Is there a backlog? No. There&#8217;s a normal amount of vehicles in the queue, both in receiving at SPAWAR, then in integration, then in preparation for shipment, so we&#8217;re keeping up,&#8221; said Brig. Gen. Michael Brogan, head of Marine Corps Systems Command.

But Pentagon spokesman Geoff Morrell said recently that the chairman of the Defense Department&#8217;s MRAP task force is pushing SPAWAR to speed up the time it takes to install the additional equipment.

&#8220;No one is satisfied yet with the amount of time it is taking to insert all the equipment that we need in these vehicles, and so they are constantly being pushed to cut down how long it takes and to do so,&#8221; Morrell said in a Sept. 26 news briefing.

Morrell also said the Defense Department plans to begin shipping MRAPs to Iraq by both sea and air beginning this month or November.

TRANSCOM and U.S. Central Command are still waiting for formal approval of a plan to fly more than 300 MRAPs per month to Iraq, said TRANSCOM spokeswoman Cynthia Bauer.

Meanwhile, the number of MRAPs flown to Iraq dropped from 120 in August to 101 in September.

MRAP manufacturers said they expect to continue to increase production of the vehicles through the end of the year.

Force Protection Industries Inc. delivered 116 MRAPs in September and expects to be able to make 160 MRAPs in October, 275 in November and 355 in December, said Michael M. Aldrich, the company&#8217;s vice president of marketing and government relations.

International Military and Government LLC provided the government with 111 MRAPs in September, up from 77 in August, said company spokesman Tim Touhy. The company plans to make 500 MRAPs per month by December.

Despite efforts to build MRAPs and fly the vehicles downrange, some commanders in Iraq have said recently that their troops are still waiting for MRAPs.

Troops in Multi-National Division-North are expected to begin receiving MRAPs for missions other than route clearance in mid-November, said Col. David W. Sutherland, commander of U.S. forces in Diyala province.

&#8220;The MRAP will be a great force protection enhancer once it becomes available to all our troops here in Diyala. We have confidence in our equipment and I know my Soldiers will welcome having this new vehicle here in Iraq,&#8221; said Sutherland, commander of the 3rd Brigade Combat Team, 1st Cavalry Division.