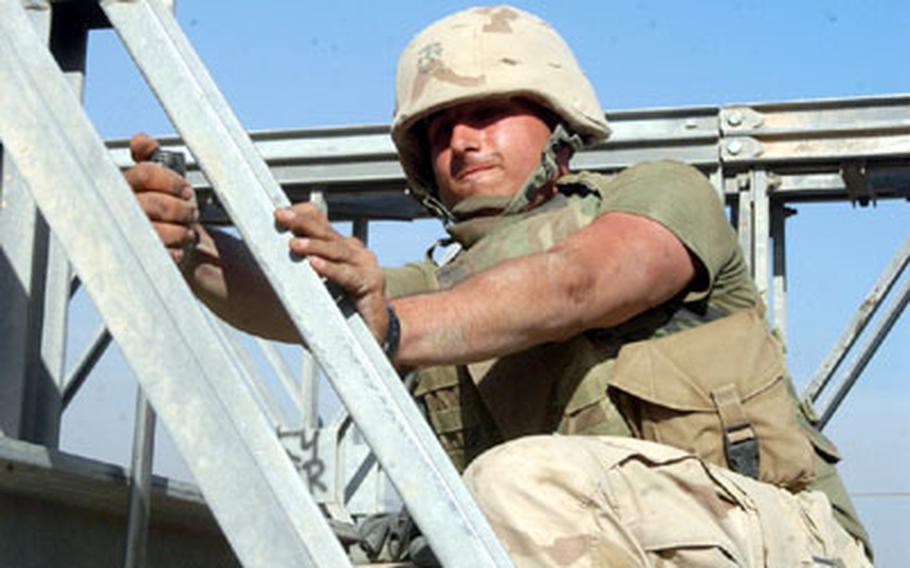 Marine Lance Cpl. Jesse Lester of Bridge Company A, 8th Engineer Support Battalion grimaces as he tightens a bolt on a bridge being built across the Tigris River. (Ron Jensen / S&S)

Marine Lance Cpl. Jesse Lester of Bridge Company A, 8th Engineer Support Battalion grimaces as he tightens a bolt on a bridge being built across the Tigris River. (Ron Jensen / S&S) 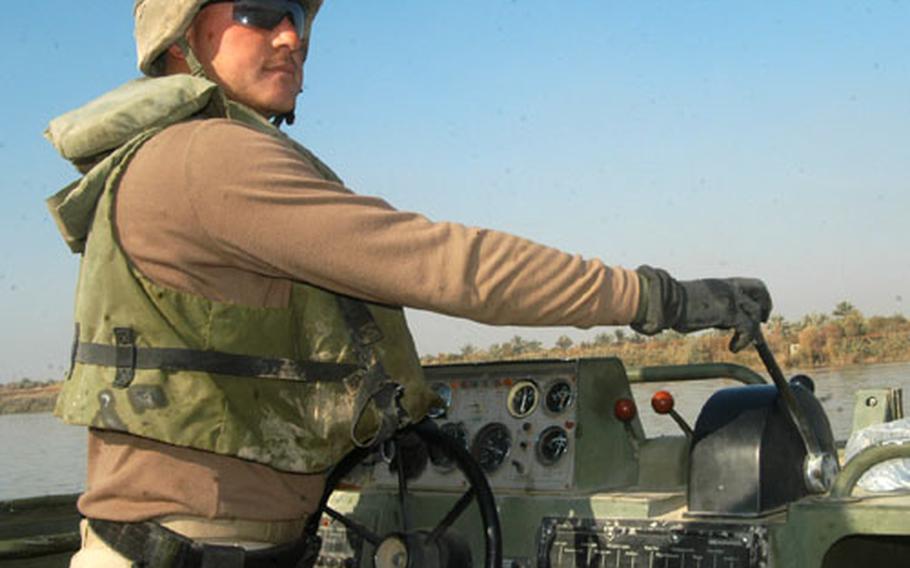 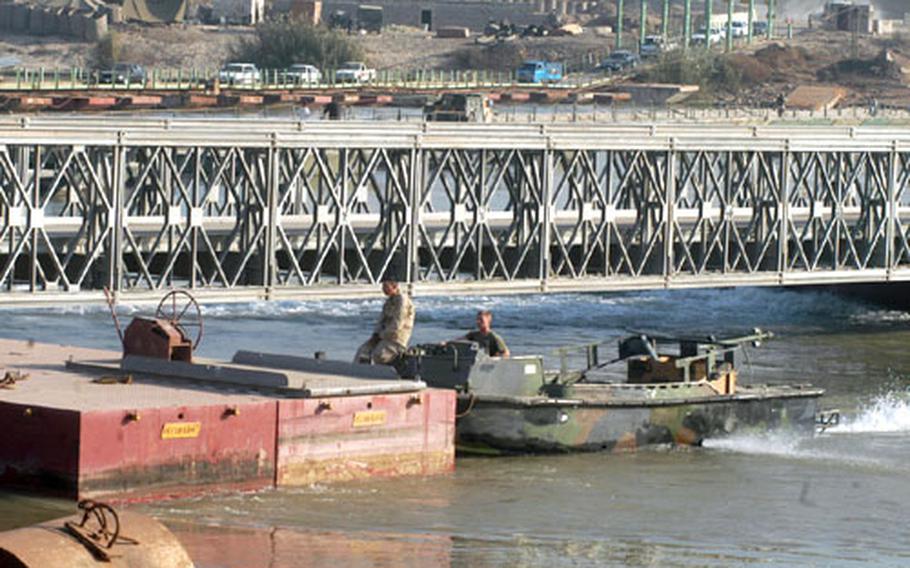 Members of the Marines’ Bridge Company A use bridge erection boats to retrieve a span of a completed bridge that had broken free and was floating down the Tigris River. When all spans have been built, the bridge will be put in place to allow better flow of convoys across the river. (Ron Jensen / S&S) 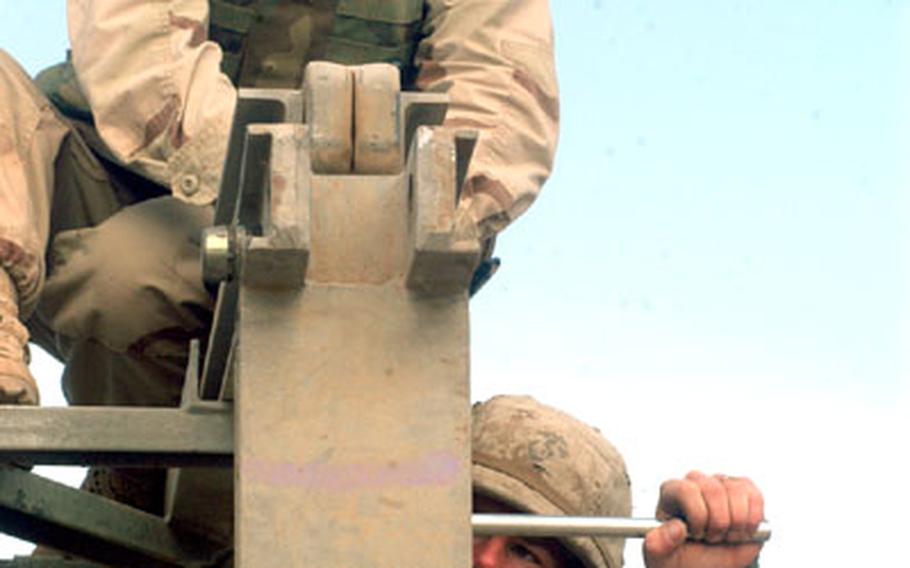 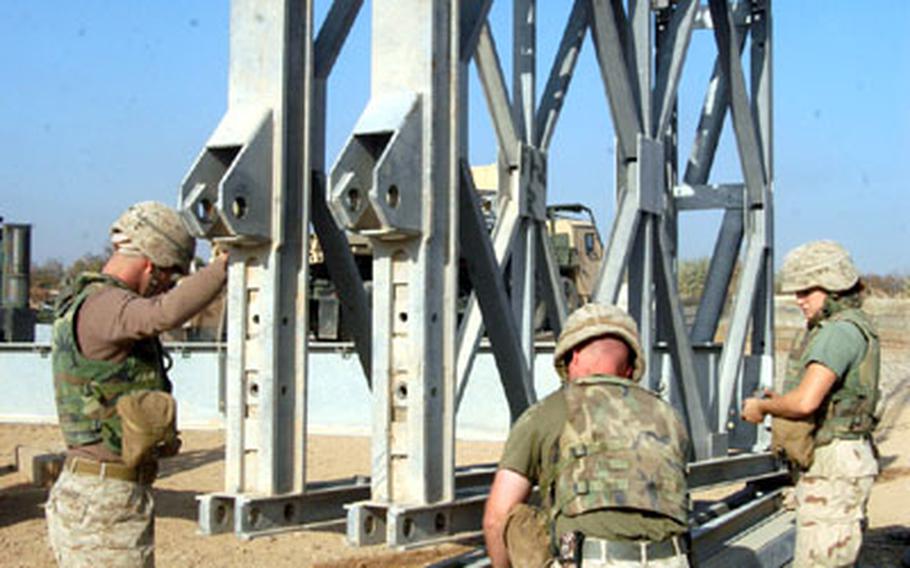 Marines from Bridge Company A prepare a 700-pound panel of a floating Mabey-Johnson bridge that will eventually span the Tigris River, replacing a more fragile one that can only carry limited traffic. (Ron Jensen / S&S)

AS SINDIYAH, Iraq &#8212; For a few Marines, the weapons of choice are sledgehammers, wrenches and elbow grease &#8212; lots of elbow grease.

They are the Marines of Bridge Company A, part of the 8th Engineer Support Battalion, and their singular status in the Corps makes up for a lot of sore muscles and aching backs.

The Corps has two bridge companies in the reserves. They&#8217;ve been to Iraq and served six-month tours. Combat Marines typically spend seven months in Iraq. Bridge Company A came for 12 months.

They have built bridges, or taken them out, across Iraq for more than 10 months, about 25 or 30 of them, sometimes traveling hours from their home at Logistics Support Area Anaconda, 40 miles north of Baghdad.

When they do that, they work around-the-clock in 12-hour shifts until the job is complete.

The bridge they are building now on the Tigris River, near the village of As Sindiyah, is not far from Anaconda, so they can spend their nights on base.

This is their toughest bridge to date: a Mabey-Johnson bridge put together in sections and then assembled on the river. It&#8217;s the first floating bridge the company has built in Iraq.

For more than a year, a simple assault bridge has shouldered the heavy traffic load.

&#8220;This bridge is not meant for what it&#8217;s doing,&#8221; Pickering said, motioning toward the assault bridge that heaved and rolled each time a truck crossed.

The current bridge can support only one vehicle at a time, so convoys must stop on both sides of the river to cross, creating stationary targets.

When the Marines finish the new 340-meter bridge, convoys will be able to cross without stopping. They began work on it in November, and its expected completion date has not been announced due to security reasons.

While not exactly complaining, the bridge-building Marines don&#8217;t cheer every time they have to create something to cross a river.

No one seemed overjoyed by fastening 700-pound galvanized steel sections together with a 1,000-pound transom beam, driving in metal pins the size of a forearm with sledgehammers and twisting giant nuts and bolts to hold everything together.

When a crane brought a section of the bridge to the Marines, they manhandled it into place.

Once it had been wiggled into place, the pounding started. Sledgehammers slammed into steel, then again, until the pin slipped into place.

The best job in the company might be piloting one of the bridge erection boats, or BEBs. Each has two 250-horsepower engines that operate independently, allowing it to maneuver on the water much like a tracked vehicle does on land.

The boats push the floating sections into place so they can be fastened together. When one completed section broke away from a mooring recently, the boat&#8217;s pilots raced to their boats like firemen responding to a call. They roared into the river and caught up with the fugitive piece of bridge, gently shoving it back to shore.

The bridge at As Sindiyah is a multi-service effort. Air Force engineers designed the abutments and the roadway leading to the bridge on each side. Soldiers from the 502nd Engineer Battalion have provided security and often operated the crane that moves the heavy bridge pieces into place.

The Marines said they enjoy seeing the finished product, but don&#8217;t revel in that sense of accomplishment too long.

One reason the Marines don&#8217;t spend too much time enjoying their handiwork is because they don&#8217;t know how long the bridge may be around.

Allen recalled one time returning to Anaconda after building a bridge south of Baghdad.

Other times, the Marines know they made a difference.

Laird recalled a bridge on Main Supply Route Tampa. Until that bridge was built, no supplies could get to the bases in northern Iraq by truck.