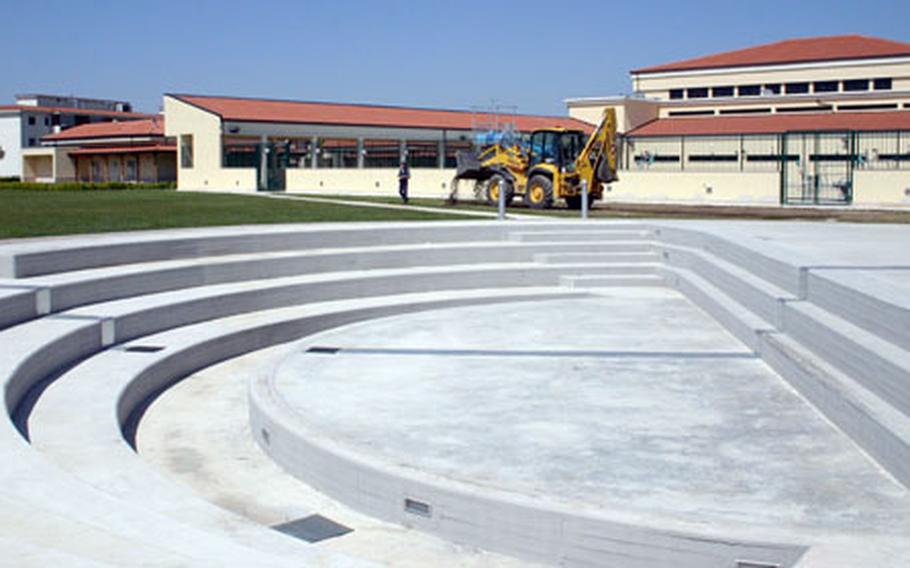 A bulldozer sprinkles dirt Friday to touch up the grassy area surrounding the soon-to-open amphitheater at the U.S. Navy support site base at Gricignano, near Naples, Italy. (Sandra Jontz / S&S)

NAPLES, Italy &#8212; The official christening of the new Gricignano base amphitheater on April 20 might be nice, says Greg Seip, marketing director for the local Morale, Welfare and Recreation program, but it won&#8217;t be as spectacular as the arena&#8217;s inaugural act.

Renowned Latino musician Tito Puente Jr., flanked by the singing siblings Howie Dorough, of the Backstreet Boys, and his older sister, Pollyanna Dorough, will be the first to perform in the $200,000 facility of concrete benches dug in the ground.

Puente is internationally recognized for his contributions to Latin music as a bandleader, composer, arranger, percussionist and mentor. He also is called &#8220;El Rey del Timbal&#8221; and the &#8220;King of Mambo&#8221; and has recorded more than 100 albums, published more than 400 compositions and won five Grammy awards.

The performance, free for spectators, kicks off at 8 p.m. at the newly named Central Park Amphitheater, next to the Fitness Forum&#8217;s outdoor swimming pool.

Though construction on the 3.44-acre amphitheater actually was completed in May of last year, &#8220;nothing came up for us to utilize it&#8221; until this Thursday&#8217;s spectacular, Seip said.

&#8220;And this just dropped in our laps a week ago,&#8221; he said of the USO and Armed Forces Entertainment-sponsored event of Puente and the Doroughs.

MWR has plans to present shows in the four-tier cement semi-circle during the spring, summer and autumn months, such as magic and comedy shows, band performances and plays, Seip said.

For Thursday&#8217;s show, MWR will provide transportation from the Capodichino base to the support site for single sailors, provided there is enough interest, he said. Those interested must sign up through the liberty program.