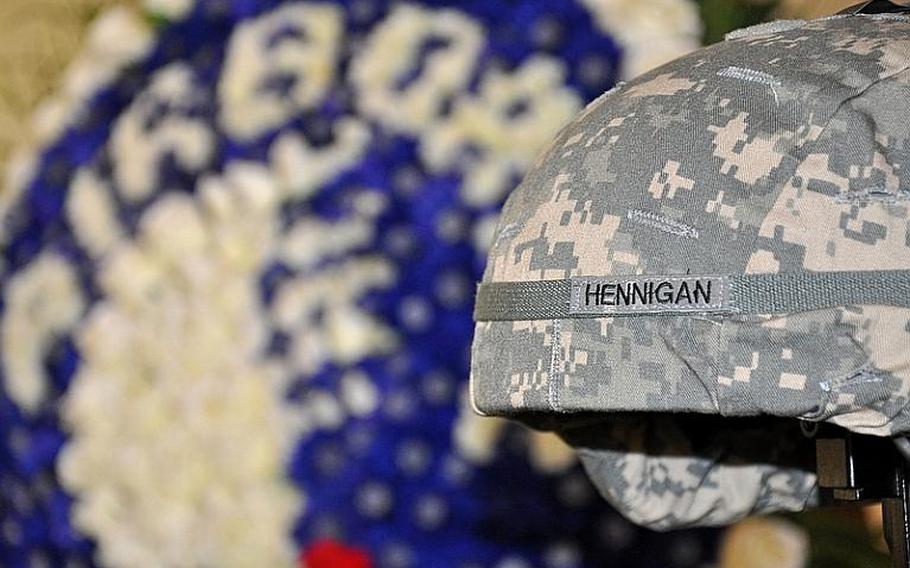 Spc. Matthew Hennigan, who was killed in Afghanistan June 20, was remembered Thursday during a memorial observance at his unit&#39;s home base in Bamberg, Germany. ()

Spc. Matthew Hennigan, who was killed in Afghanistan June 20, was remembered Thursday during a memorial observance at his unit&#39;s home base in Bamberg, Germany. () 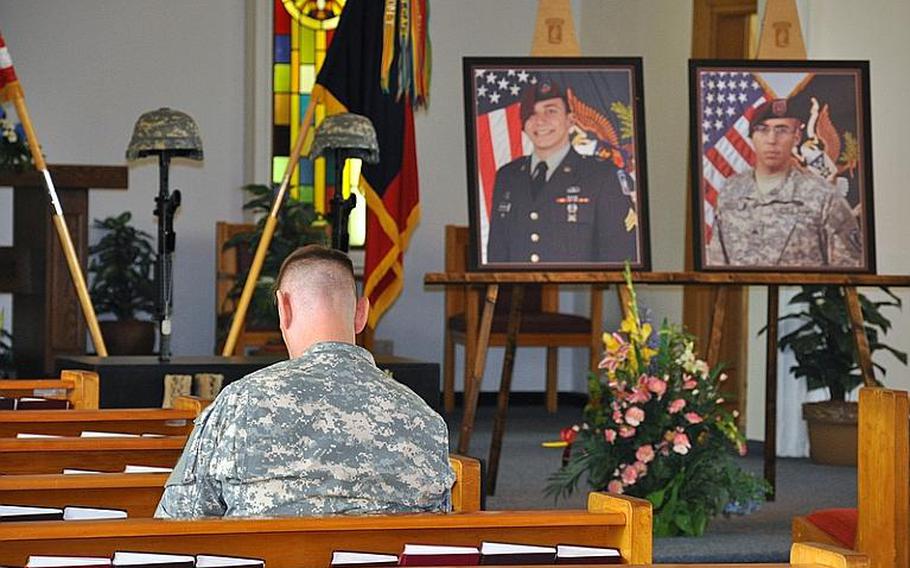 A soldier mourns at the Warner Barracks chapel in Bamberg before the memorial ceremony to honor the two most recent combat deaths in the 173rd Airborne Brigade Combat Team, Spc. Matthew Hennigan (left) and Spc Louis Fastuca. Both were promoted to sergeant, and unit officials altered the soldiers&#39; photos to add their new ranks. ()

BAMBERG, Germany &#8212; On average, it takes three days to be able to snowboard without falling, but it took Spc. Matthew Hennigan less than an hour before he was racing down the hill like a professional, Staff Sgt. Michael Stefan recalled.

&#8220;No matter how many times he crashed going 45 mph, he would jump back up and keep going,&#8221; Stefan said in a letter read Thursday by Sgt. Brandon Daar as mourners gathered to remember Hennigan, 20, killed June 30 in Afghanistan. Stefan was unable to attend because he is in Afghanistan where Hennigan&#8217;s unit is still conducting operations.

At one point his buddies stopped Hennigan on his snowboard to advise him to slow down, Stefan wrote.

Both Daar and Stefan agreed that this was Hennigan&#8217;s legacy: always moving at 100 mph no matter what he did.

Hennigan&#8217;s photo, along with that of fellow paratrooper Spc. Louis R. Fastuca, were on display during a memorial service for the two soldiers at the Ledward chapel in Bamberg, home of two 173rd Airborne Brigade Combat Team battalions.

Fastuca was killed July 5 while conducting combat operations in Wardak province. He was recently remembered at his home base in Vicenza, Italy.

Hennigan, of Las Vegas, was killed in Logar province. He was posthumously promoted to sergeant, according to his unit.

On the day Hennigan was killed, it was no surprise to his fellow soldiers that Hennigan, whose job was to collect &#8220;human intelligence,&#8221; volunteered to go on the mission to help identify some known insurgents in the area around the village of Shadarkhel.

He died at Forward Operating Base Shank of wounds suffered during a small-arms attack during that mission in the Tangi Valley, according to a Defense Department release.

Daar worked in the same platoon as Hennigan for 18 months before being wounded in another mission in Afghanistan. Daar remembered Hennigan as always being on the move, staying up late to complete missions and reports.

This was the first time, Daar and Stefan said, that Hennigan had rested.