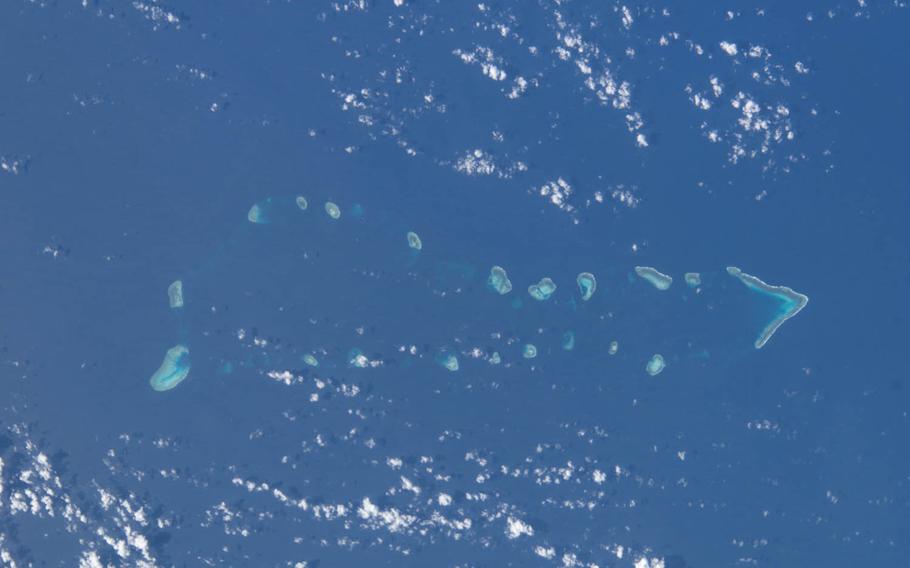 This photo from the International Space Station shows the South China Sea along with Eldad Reef and Itu Aba Island, features of the disputed Spratly Islands. The sea is in danger of ???virtually a Chinese lake??? by 2030, capable of ???overawing ??? lesser powers" warns a new study from the Center for Strategic and International Studies in Washington, D.C. (Courtesy of NASA)

The regional balance of power in the Pacific is slipping away from the U.S. because President Barack Obama’s “pivot” to Asia has been hampered by budget cuts, lack of clear policy goals and China’s willingness to take risks to assert territorial claims, a new U.S. study warns.

That trend is accelerated by North Korea’s continued provocations, Russia’s growing interest in the region and the threat from the Islamic State that has drawn away U.S. military assets, according to a report prepared for the Defense Department by the Center for Strategic and International Studies, Washington-based think tank.

Unless the trend is reversed, the report warned that the South China Sea will be “virtually a Chinese lake” by 2030, capable of “overawing … lesser powers.”

“Actions by countries in the region routinely challenge the credibility of U.S. security commitments, and U.S. capability development is not keeping pace with challenges by potential competitors, resulting in the regional balance of military power shifting against the United States,” the report said.

The Obama Administration came into office with the goal of refocusing American attention from the Middle East to the Pacific and East Asia — more than $1.2 trillion in U.S. trade transits through the Pacific each year. Then the perfect storm of budget cuts, sequestration, a rising Islamic State, Syria’s civil war, and concerns about Iran and Russia keep dragging the U.S. back into the Middle East morass.

Still, concrete military commitments have been made to the Asia-Pacific since the pivot was announced, and the CSIS report gave the Defense Department “high marks” for its efforts.

Stars and Stripes did an assessment last year. It found that the number of troops in the region rose from 244,000 to 266,000; the Navy deployed two more destroyers in Japan and a second littoral combat ship in Singapore; and the number of Marine Corps aircraft rose from 416 to 630, while the Navy’s increased from 1,056 to 1,111.

In addition, the Marines also created a rotational force in northern Australia. The Army deployed highly trained units for multiple sequential exercises with nations throughout the region under the Pacific Pathways program, providing a presence without permanent bases — and their inherent costs. An agreement signed with the Philippines in 2014 allows for an increased rotational presence and enhanced cooperation.

“Nevertheless, the implementation of the rebalance may be insufficient to secure U.S. interests,” the CSIS report said, adding that the U.S. needs to continue and “in some cases accelerate investments in regional relationships, posture, operational concepts, and capabilities.

The main issue is China’s aggressive policy toward a number of disputed islands in the South and East China seas, which threaten freedom of navigation in one the world’s most critical trade routes.

“Polls in Asian countries indicate strong support for the rebalance, with the notable exception of China,” said the report, which reflects the work of 21 CSIS contributors. “States across the region have become more sensitive to China’s growing political, economic and military power, and are potentially vulnerable to Beijing’s increasingly coercive behavior.

“The U.S. relationship with China is complex, mixing elements of cooperation and competition. Although the U.S. rebalance seeks to create space for China to contribute to peace and prosperity throughout the region, it is also important that DOD deter Chinese aggression or coercion and defend U.S. interests.”

Obama announced the Pacific pivot just over four years ago, seeing it as the region’s most critical for current and future U.S. interests. At the time, the military interventions in Iraq and Afghanistan seemed to be winding down, allowing a war-weary country to shift its priorities in security, economics and human rights.

But the Mideast has regressed and the U.S. is keeping troops in Afghanistan to avoid a similar fate. Russia’s adventurism in the Ukraine has spawned concerns about its strategy in Europe, the Pacific and the Arctic.

These every-changing situations leave questions about whether a shrinking U.S. military can handle such a variety of challenges and still stay true to the Pacific pivot. Those are complicated by the administration’s failure to come up with a clear idea what the rebalance is and how it should work; instead the focus has been on what it’s not – specifically that it’s not aimed just at China.

“Although the Obama administration issued a series of speeches and documents on the rebalance, the authors found that there remains no central U.S. government document that describes the rebalance strategy and its associated elements,” the CSIS report says.

That leaves the need for a clearly stated, coherent policy that lays out specific goals and how to meet them.

“It’s obviously a question perennially on the minds of policymakers who are stretched thin and our partners and allies in the Pacific who do get concerned with the United States’ commitment elsewhere in the world,” Mira Rapp-Hooper, a senior fellow with the Asia-Pacific Security Program at the Center for a New American Security, told Stars and Stripes. “That said, there is a future for the Pacific rebalance, I believe, not least because the pivot to Asia was not in fact an unprecedented or strictly a new move, but a deepening and continuation of long-standing U.S. policy.”

Ending the across-the-board budget cuts known as sequestration that military leaders say are hamstringing their efforts and plans is one of the most critical issues, she said.

“There’s no question that the Pentagon and policymakers overall have to be able to walk and chew gum to make sure that the Pacific rebalance continues in its most robust form,” Rapp-Hooper said.

Both the CSIS report and other analysts also say the U.S. has to overcome the strain on already-limited resources to meet minimum goals in Europe, the Mideast and East Asia and get more support from its allies.

A report issued in November by the Center of Strategic and Budgetary Assessments think tank estimated the Navy will need to spend $4 billion to $7 billion more on shipbuilding each year just to sustain current presence levels into the future because years of underfunding and increased demand have already eroded the ability of the Navy and Marines to respond to crises and maintain a presence in the world’s hotspots.

The CSIS report, citing a “long-term mismatch” between strategy and resources, urged the Defense Department to develop a list of alternatives for the next administration that would include tradeoffs and efficiencies to tackle the highest priorities and “make headroom” for new initiatives.

Still, outside help is clearly needed.

“A successful rebalance depends on Europe being able to do more in its neighborhood,” said Dr. James Goldgeier, dean of the School of International Service at American University in Washington and an expert in U.S.-Russia relations. “The less capable Europe is, the more attention and resources the United States must devote to Eastern Europe and the [Middle East/North Africa] region.

“The rebalance never implied the United States would leave those regions, as many incorrectly stated, but it does mean what the term implies: rebalancing U.S. foreign policy, which was overbalanced toward Europe and the Middle East.”

There also are questions about how much U.S. intervention the Middle East will accept, said Inhan Kim, assistant professor in the political science department at the University of Colorado.

“I think it is unlikely for Washington to send a large-scale ground forces to the region, so I don’t think the Middle East issues will distract the U.S. commitment to the Western Pacific,” Kim said.

Getting support in Asia may be more critical, and there are some positive signs.

The U.S. has hailed the Japanese government’s efforts to ease the restrictions on its military that were imposed after World War II. Washington has signed an agreement with the Philippines that will allow U.S. forces to use military bases there on a limited basis. Australia has mentioned the possibility of helping maintain freedom of navigation in the South China Sea. Britain is planning to send Typhoon jets to Japan for an exercise for the first time.

But more help is needed, particularly in maritime security.

The biggest question for the region is how to deal with China.

The CSIS report suggests a combination of engagement, confidence-building and crisis management with Beijing to prevent a flare-up from escalating into a full-blown crisis, along with deployment of more key resources as deterrence.

It suggests stationing a second aircraft carrier and its associated strike group, air wing and personnel west of the international dateline, possibly to Yokosuka in Japan, station an additional two Los Angeles-class nuclear attack submarines in Guam, making a total of six, and homeporting several Virginia-class submarines in the Indian Ocean region.