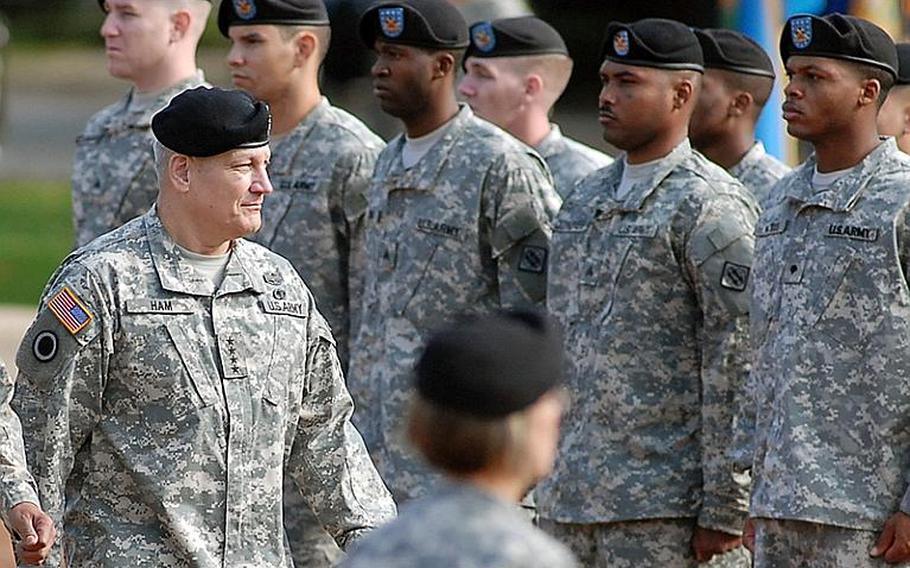 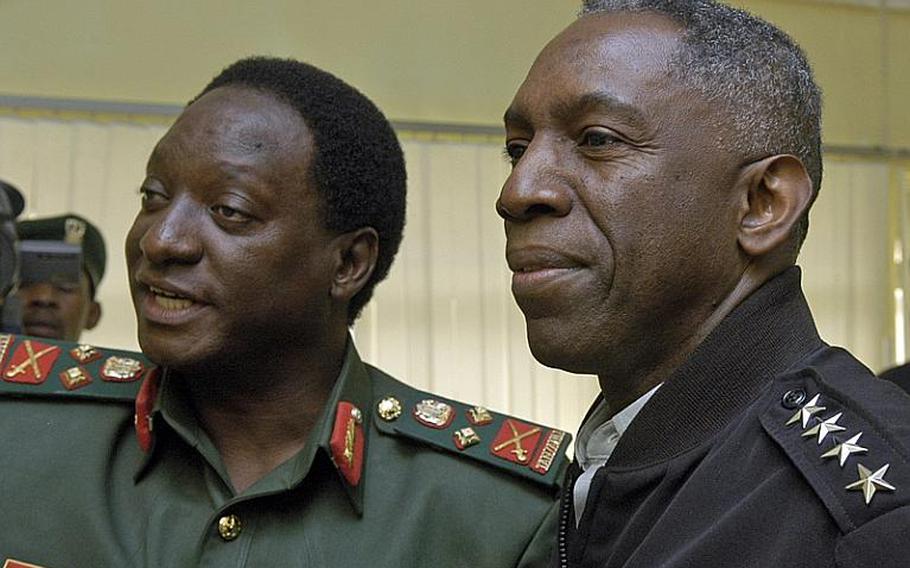 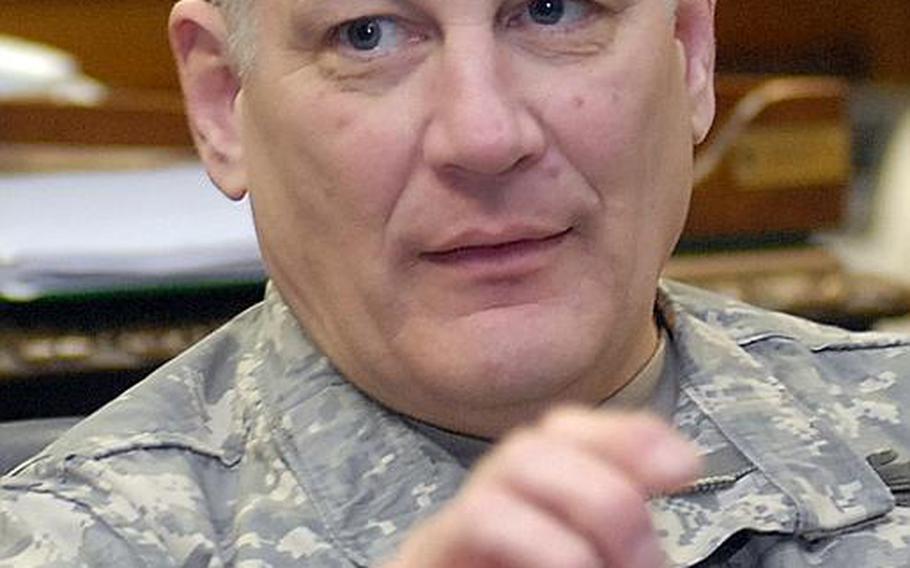 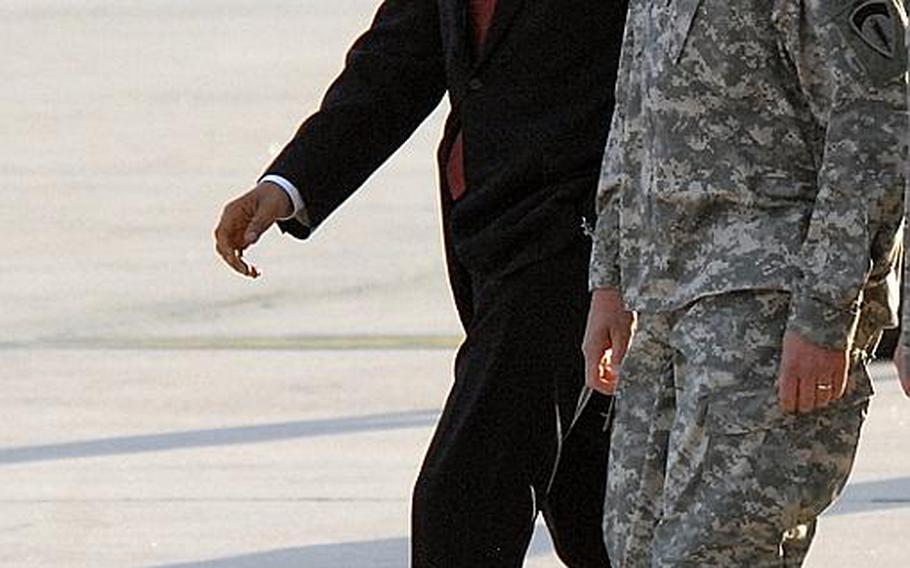 U.S. Army Europe commander Gen. Carter Ham talks with President Barack Obama as he escorts him to to Air Force One after the president visited Ramstein Air Base and Landstuhl Regional Medical Center last year. Ham, who has led the Fort Hood shooting investigation and a review of the military&#39;s policy regarding gays in the service, has been nominated to take the helm at U.S. Africa Command, replacing Gen. William "Kip" Ward. ()

Gen. Carter Ham, the commander of U.S. Army Europe and the general in charge of leading a yearlong review into the policy of banning openly gay men and lesbians from military service, has been nominated to head U.S. Africa Command.

If confirmed, Ham would replace Gen. William "Kip" Ward, who was appointed AFRICOM's first commander when the military's sixth and newest unified combatant command stood up in October of 2008.

His nomination to lead AFRICOM - which requires Senate confirmation - is the latest in a growing list of accomplishments for the general, including serving as director of operations for the Joint Chiefs of Staff and commanding troops in northern Iraq from January 2004 to February 2005.

Ham, 58, also led the investigation into the Fort Hood shootings last November, in which an Army psychiatrist is accused of killing 13 people and wounding 29 others. The investigation resulted in disciplinary action against six people, most of whom worked at Walter Reed Army Medical Center.

And, Ham and Jeh Johnson, the Defense Department's top lawyer and an appointee of President Barack Obama, are conducing a yearlong review of the effects of revoking "don't ask, don't tell," which would allow gays to serve openly in the U.S. military. The review is assessing the planned policy change's impact on benefits, housing, retention and morale.

Of his nomination to head AFRICOM, Ham said in a prepared statement that he was "honored to be nominated for this opportunity."

"And if confirmed," he said, "I would be excited to serve with the great AFRICOM team that my friend (Gen. Ward) has built."

The nomination comes at a time when AFRICOM is refining its mission on the 53-nation continent - home to a growing contingent of potential terrorist threats, including militant groups such as al-Shabab, and pirates in the Horn of Africa.

Carl LeVan, an assistant professor at American University in Washington, D.C. who specializes in African politics, said that Ham would likely face difficult questions during his confirmation hearings about how the command will better incorporate civilians, such as those from the State Department.

AFRICOM's stated purpose is to help its partner countries, through various training missions, develop the capacity to provide for their own security and protect their own borders.

From its start, AFRICOM inherited more than 100 missions, ranging from HIV awareness campaigns in African militaries to assisting them in the fight against terrorism. It has engaged in humanitarian efforts, including deploying a team of specialists to the Democratic Republic of the Congo in 2009 to assist women who had been raped in the country's war-torn eastern region.

But the nascent command also has been controversial.

Originally, the Pentagon wanted to base AFRICOM on the continent, but resistance from African nations forced it to abandon that plan and base it in Stuttgart, Germany. The U.S. military has liaisons at several African embassies and a base at Camp Lemonier in Djibouti, but Ward has continually had to reassure African leaders and media that the U.S. does not intend to build bases in Africa.

AFRICOM also provided limited logistical and advisory support for a Ugandan military operation attempting to capture Joseph Kony, the leader of the deadly and vilified Lord's Resistance Army. At the behest of the National Security Council, the command provided the Ugandan military with maps, satellite phones, GPS receivers and about $1 million in fuel for vehicles, as well as a team of advisers who provided feedback on the plan.

Kony was not captured, however, and many of his fighters fled their camps. In their flight from the Ugandans, the LRA fighters killed hundreds of civilians.

Critics of the operation argue that the mission failed to plan for securing the surrounding civilian population.

More recently in August, the militant group al-Shabab launched an attack on a Mogadishu hotel, leaving more than 30 people dead, and later clashed with Somali and African Union forces. After the attack, Ward said that AFRICOM was prepared, if called upon, to lend support to the embattled Somali army, most likely in the form of logistical assistance, training and equipment, but not with ground forces.

"It doesn't mean you have to have U.S. forces on the ground to make a difference," Ward told Stars and Stripes at the time.

Many Africans, however, are skeptical of AFRICOM and its relation to the "war on terror," which has been invoked by African governments to retain power, LeVan said,

"The war on terror," he said, "is one of the stickiest divides between African governments and African civil society."