Buy Photo
A woman strolls past a Tokyo department store that's been closed because of the coronavirus, April 9, 2020. (Akifumi Ishikawa/Stars and Stripes)

Buy Photo
A woman strolls past a Tokyo department store that's been closed because of the coronavirus, April 9, 2020. (Akifumi Ishikawa/Stars and Stripes) Buy Photo
A man glances at a Starbucks in central Tokyo that's been shuttered because of the coronavirus, April 9, 2020. (Akifumi Ishikawa/Stars and Stripes) 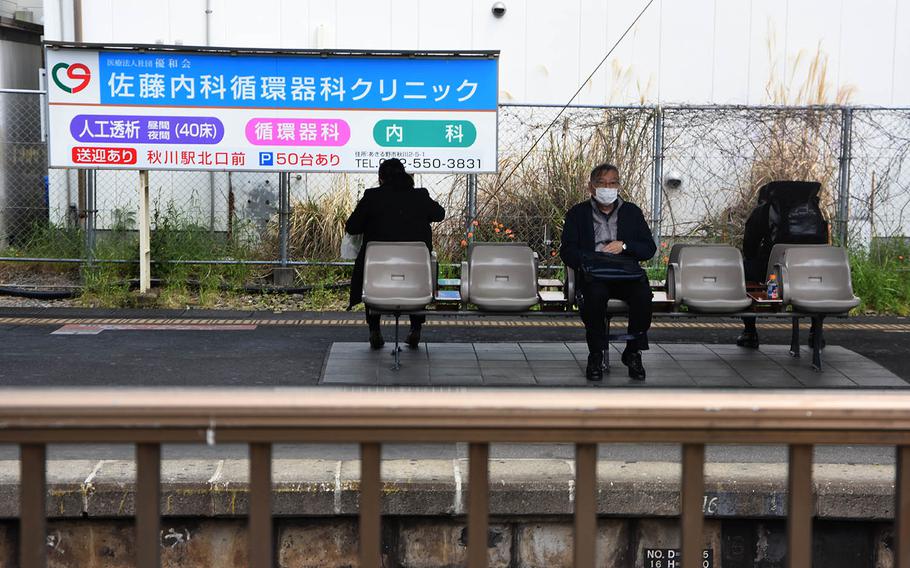 Buy Photo
Travelers wearing masks to ward off coronavirus in Fussa, a city within Tokyo, wait for trains at the city's main station on Friday, April 17, 2020. (Theron Godbold/Stars and Stripes)

TOKYO — The total number of confirmed coronavirus infections in Tokyo passed 3,000 over the weekend as the overall number in Japan also continues to rise, according to data Monday from the Tokyo Metropolitan Government.

Tokyo, now the epicenter of the pandemic in Japan, counted 3,082 cases by Sunday, according to the Tokyo metro website. The number of deaths reached 71, it stated.

Although the number of daily cases typically falls on Mondays due to the low number of tests being conducted over the weekends, the number of new cases has reached triple digits for the past couple of weeks. The daily cases reached 107 on Sunday, down from Saturday with 181 cases and Friday with a record-high of 201 cases.

Tokyo Gov. Yuriko Koike late last month described the city as being “in a critical situation on the verge of an explosive increase of infection.” She urged residents to stay home, especially over the weekends, and to work from home as much as possible. She also called on city residents to stay home at night, citing the number of infected cases stemming from entertainment establishments such as hostess bars and night clubs.

April 7, Japan’s Prime Minister Shinzo Abe declared a state of emergency in Tokyo and six other prefectures with a high risk of infection. Thursday, he extended the emergency nationwide to prevent movement of people across the prefectures and to achieve as much as 80% social distancing as Japan next week enters Golden Week, a series of Japanese national holidays, according to the Associated Press.

Nationwide, Japan has counted 10,751 cases of coronavirus and 171 deaths as of Sunday, according to the Ministry of Health, Labour and Welfare news release.

The nationwide emergency declaration is in effect until May 6 but could be extended. It allows prefectural governors to urge people to stay home, close businesses and cancel events. Authorities, however, cannot penalize those who do not follow those guidelines.

Tokyo and the Kanagawa prefecture, the area south of Tokyo where Yokohoma and Yokosuka Naval Base are located, have called on schools, movie theaters, malls and night entertainment establishments to close after the declaration. Schools in both prefectures are already closed. Authorities in both have also urged restaurants and bars to operate only between 5 a.m. and 8 p.m. and to stop serving alcohol at 7 p.m.