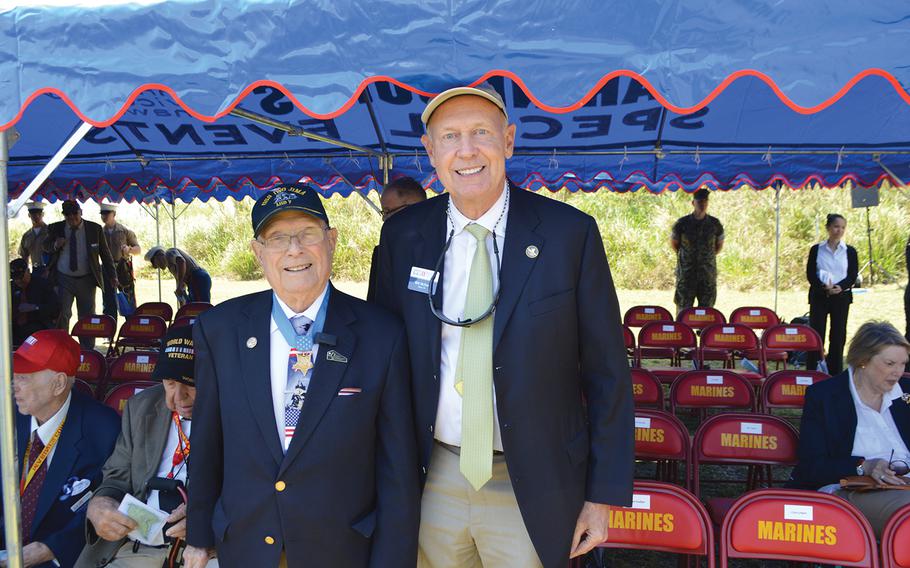 One of them, Francis Currey — who rescued five soldiers pinned down by German fire — died in October.

“And now there are two,” said Bill McNutt.

McNutt, who resides in Dallas, wants President Donald Trump to approve a state funeral for the last living Medal of Honor recipient from World War II. He founded an organization, the State Funeral for World War II Veterans, in 2017 and brought on dozens of volunteers to plead that it be done.

With the deaths of Maxwell and Curry, their work is becoming more desperate.

“We are feeling a real sense of urgency,” said McNutt, 64. “How sad we will all be if we can’t convince the president to make this designation.”

The Medal of Honor was awarded to 473 service members from World War II, according to the Congressional Medal of Honor Society. The two still living are Charles Henry Coolidge, 98, and Hershel “Woody” Williams, who celebrated his 96th birthday last month.

Coolidge led a group of machine-gunners and riflemen in southern France. He was tasked in October 1944 with holding a hilltop position, and he and his men defended against an enemy attack for four days.

Williams fought at Iwo Jima in 1945. He used a flamethrower to destroy Japanese pillboxes, running back and forth between the breach and the refueling lines during a period of four hours, all while under enemy fire.

McNutt believes a state funeral — which includes a public observance in the U.S. Capitol — would serve as a final send-off to the World War II generation. Either Coolidge or Williams would be a symbol for the millions of other Americans who fought in the war, he said.

According to data from the Department of Veterans Affairs, there are fewer than 390,000 World War II veterans still living. More than 16 million Americans participated in the conflict.

“It would be a final salute to the Greatest Generation,” McNutt said.

McNutt recruited volunteers in 21 states to rally statewide leaders for their support. During the past two years, the state legislatures in Tennessee, Texas, Louisiana and Missouri passed resolutions calling for the state funeral. Congressional delegations from five states — Minnesota, Louisiana, Missouri, Utah and West Virginia — wrote Trump to ask that he make the designation.

In addition, the U.S. senators from West Virginia — Joe Manchin, a Democrat, and Shelley Moore Capito, a republican — introduced a resolution requesting the funeral.

The effort was given a boost when Brent Casey, the grandson of Woody Williams, joined the cause. Casey, a Desert Shield/Desert Storm veteran, lives in Louisville and is trying to gain support from Kentucky leaders.

At a White House holiday party, Casey and his grandfather passed a letter about the state funeral to Trump through Secret Service. They also have asked for Williams to be granted an audience with the president to discuss it, Casey said.

“I feel like if we could only get Woody in front of him for two minutes and not be passing a letter to a Secret Service agent,” Casey said, “if we could just get word to him directly, in an effective way, it would be a no-brainer.”

U.S. presidents have the authority to grant state funerals. They’re typically reserved for presidents, but they have been granted to other people — most recently in 1964 for five-star General of the Army Douglas MacArthur. President John F. Kennedy had authorized the state funeral, and his successor, Lyndon Johnson, carried out the designation after Kennedy was assassinated in 1963.

McNutt believes that if Trump were to designate the funeral and Coolidge or Williams lived past Trump’s time in office, his successor — like Johnson — would carry it out.

The last state funeral was held in December for former President George H.W. Bush, who was a World War II veteran. As he watched the nation come together to pay tribute, Casey felt more strongly that a state funeral for his grandfather or Coolidge would be “symbolism at the greatest level.”

“It would be such an uplifting thing for this country, especially in the time we’re in right now,” Casey said. “This is something everybody could get behind. It could move us forward.”

The potential that his grandfather could be the last one living — and the one to represent millions of other World War II veterans — is “overwhelming” and “surreal,” Casey said.

Even in their 90s, Coolidge and Williams have continued to serve their communities, he said. A foundation was opened in Williams’ name that aids Gold Star families, providing them with scholarships and outreach programs. A center is currently being established in Coolidge’s name to teach character development to elementary, middle and high school students.

“They could’ve gone home and rested on their laurels and just been done — sat on their rocking chairs on the front porch with an iced tea. But neither of them did that,” Casey said. “Both of them, on some level, are still serving. Both of them are great Americans — national treasures that have certainly proved they would represent that place very well, regardless of which one it is.”