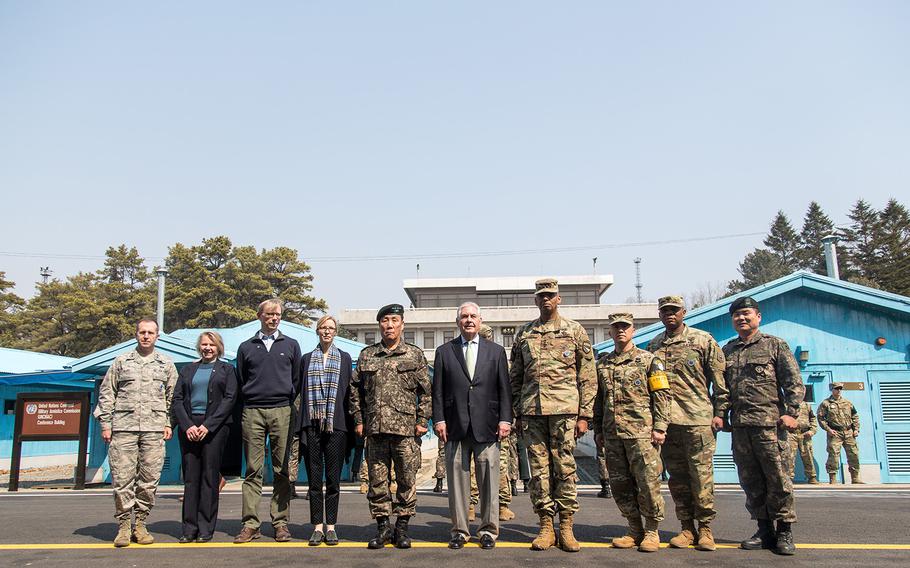 Buy Photo
Secretary of State Rex Tillerson stands with U.S. and South Korean military officials on the demarcation line between North and South Korea at the Joint Security Area of the Demilitarized Zone, Friday, March 17, 2017. (Marcus Fichtl/Stars and Stripes)

PANMUNJOM, South Korea – Secretary of State Rex Tillerson got an up-close view of North Korea on Friday when he visited the world's most heavily fortified border.

The trip to the truce village of Panmunjom was Tillerson’s first stop as he began his inaugural visit to South Korea as America’s top diplomat.

Tillerson traveled to the Demilitarized Zone after landing at Osan Air Base on the second part of his three-nation Asia tour, which began in Japan and ends this weekend in China.

He was flown by helicopter into Camp Bonifas, a U.S. base near the Demilitarized Zone, where he visited with troops and signed the wall of a dining facility in a tradition that dates to some of the first troops stationed there.

Tillerson then went to the Joint Security Area, where blue buildings straddle the border and U.S. and South Korean forces face their northern enemies at close quarters.

Roughly 30 tourists on the North Korea side greeted Tillerson and took his photograph before being ushered away as he stepped onto the demarcation line.

Tillerson made no comments and refused to answer questions from reporters as he was briefed by Gen. Vincent Brooks, commander of U.S. Forces Korea.

The remainder of his South Korea agenda will include a visit to the interim government of Prime Minister and Acting President Hwang Kyo-ahn, which has been facing pressure over the U.S. military's recent deployment of an advanced missile-defense system known as THAAD.