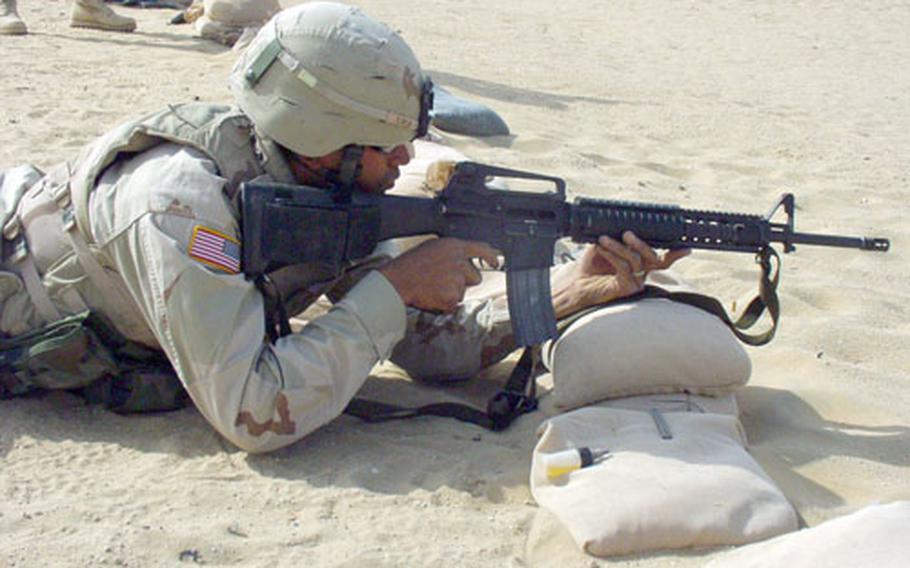 Spc. Joseph Barnaba, 30, of Opelousas, La., fires his M-16 at the remote Udairi Range in the desert of northwestern Kuwait. His unit, the 256th Brigade Combat Team of the Louisiana National Guard, is training for duty in Iraq. It is the first unit of the third wave of troops to serve in Iraq in what is being called Operation Iraqi Freedom ’04-’06. (Steve Liewer / S&S)

Spc. Joseph Barnaba, 30, of Opelousas, La., fires his M-16 at the remote Udairi Range in the desert of northwestern Kuwait. His unit, the 256th Brigade Combat Team of the Louisiana National Guard, is training for duty in Iraq. It is the first unit of the third wave of troops to serve in Iraq in what is being called Operation Iraqi Freedom ’04-’06. (Steve Liewer / S&S) Soldiers from the Louisiana National Guard’s 256th Brigade Combat Team relax atop their tank as they prepare to convoy north from Camp Buehring, Kuwait, to Iraq. The 256th BCT is the first unit of the third wave of troops to serve in Iraq. From left are: Staff Sgt. Stanley Shavers Jr., 38, of DeKalb, Texas; 1st Lt. Keith Bores, 30, of Shreveport, La.; and Spc. Bernard Sembly, 25, also of Shreveport. (Steve Liewer / S&S) Houston Byrne, of Monterey, La., peers through a target into which he had just shot 120 rounds into from his M-16. Byrne and his unit, the 1088th Engineer Battalion of the Louisiana National Guard, were at Udairi Range in Kuwait confirming weapon zeros and expending excess ammo as they get ready to head into Iraq with the 256th Brigade Combat Team. (Curt Cashour / U.S. Army) 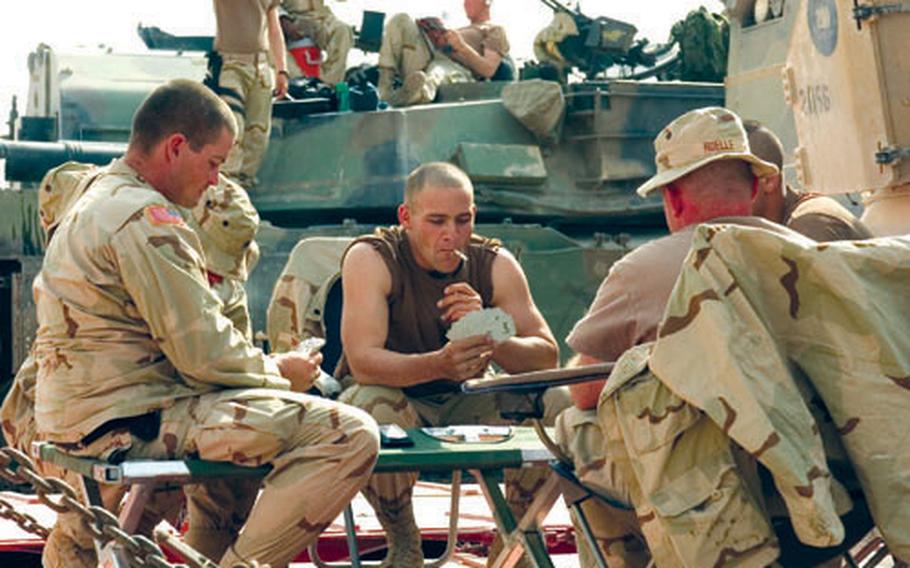 CAMP BUEHRING, Kuwait &#8212; At a dusty base camp in northwest Kuwait, the third wave is prepping for the fight.

For almost three weeks, 3,000 members of the 256th Brigade Combat Team &#8212; led by Louisiana National Guardsmen but supplemented with troops from New York, Minnesota, Wisconsin and elsewhere &#8212; have been drilling in urban warfare and honing their marksmanship skills.

The first rotation began in late 2002. The second took place during the early part of 2004, when more than 130,000 troops replaced the invasion and postinvasion forces.

This fall, the Tiger Brigade stands almost alone at Buehring. Everyone lives in climate-controlled tents or hard-shelled portable living units.

Due to adjustments to the newest rotation, soldiers can walk right into the chow hall, post exchange or sandwich shop with little or no waiting, a sharp contrast to the overcrowded camps of the last two troop rotations.

Although they&#8217;ve just arrived in the Middle East, camp life is not new to these guardsmen. They&#8217;ve been activated since May and have spent most of the intervening months at Fort Hood, Texas, or the Army&#8217;s vast National Training Center in the California desert. They&#8217;ve spent only a few weeks at home.

The seemingly odd mix of Louisianans and New Yorkers makes up the bulk of this brigade. The forbears of Jones&#8217; &#8220;Washington Artillery&#8221; unit &#8212; among the oldest gun batteries in the country &#8212; once fired at the ancestors of Capt. Sean Flynn, commander of Company B, 1st Battalion, 69th Infantry Regiment, at the early Civil War battle of Malvern Hill, Va.

The &#8220;Fighting 69th&#8221; is descended from the Irish Brigade, one of the most famous Civil War regiments. Flynn&#8217;s great-grandfather and four brothers all fought for the unit in the Union Army, and many of his relatives since have served in the brigade.

Although they still paint shamrocks on their Humvees, the Fighting 69th is now a polyglot of first-generation Americans. Flynn said his company includes natives of Puerto Rico, Colombia, Peru, South Korea and Poland.

Guardsmen from both New York and Louisiana said the union has been smooth. They say their differences united, more than divided, them, feeding the good-natured joshing that forms the basis of close male friendships.

Butterflies rumble around in almost every belly now, no matter what state the soldiers come from. Most of them confess to a touch of nerves but no real fear as they brace for the convoy ride north. It&#8217;s the mix of anxiety and eagerness that new warriors have felt since the beginning of man.

To bolster the troops&#8217; confidence, their commanders have drilled them endlessly in how to respond to unexpected attacks. They believe they are ready.

Lluvera served in combat during the Persian Gulf War. He said training is helpful, but nothing quite compares with the reality of combat, something most of the men in his unit haven&#8217;t yet experienced.