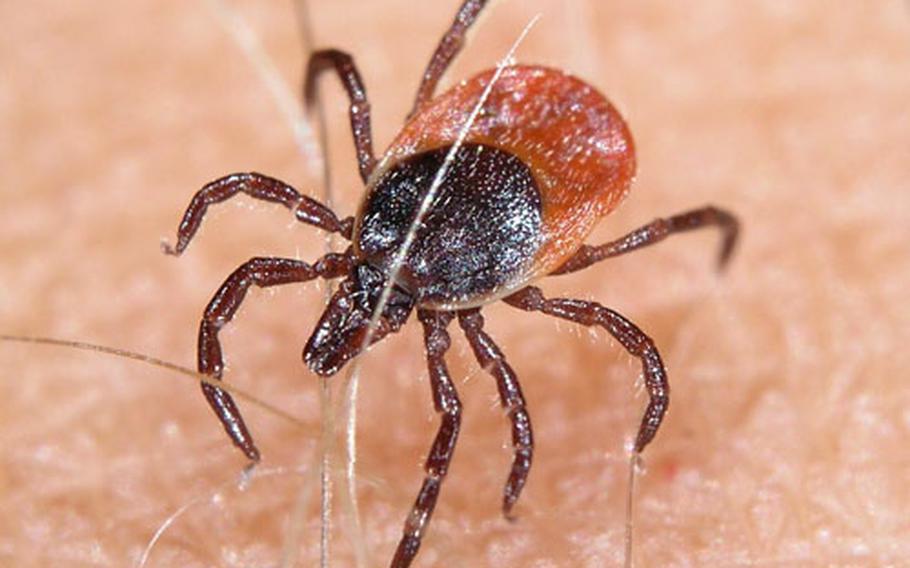 Little ticks are a huge problem. They are not always easy to spot and they can carry serious diseases, such as Lyme disease and tick-borne encephalitis. (U.S. Army Center for Health Promotion and Preventive Medicine-Europe)

LANDSTUHL, Germany &#8212; Look at the dash to the left of this sentence.

That&#8217;s much bigger than the size of the critter that could give you a debilitating illness for the rest of your life.

The blood-sucking critters are ticks, and the ones that can harm you are as small, or even smaller, than this lowercase &#8220;o.&#8221;

Ticks are a &#8220;huge&#8221; problem in Europe, especially in forests and wooded areas, said Capt. E. Owen Price, a medical entomologist with the Army&#8217;s Center for Health Promotion and Preventive Medicine-Europe.

This is tick season in western Europe, which runs from April to November. Lyme disease and tick-borne encephalitis are probably the best-known tick-transmitted illness.

The two typically are not fatal unless left untreated for an extended period of time, but both can make the victim sick.

Although treatable, Lyme disease can be a chronic disease that causes joint and body pain throughout a lifetime, Price said.

In some areas of Germany, including the Kaiserslautern military community, as much as 30 percent to 50 percent of ticks carry Lyme disease, Price said.

About five cases of Lyme disease occur among soldiers in Europe each year, Price said.

One member of the U.S. military community in Europe contracted Lyme disease from a tick during a visit to the States two years ago. He developed a &#8220;bull&#8217;s-eye&#8221; rash and experienced flu-like symptoms.

Upon returning to Europe, he was tested for Lyme disease by a German doctor. The results came back negative even though he did indeed have the illness. At the time of the test, his body had not produced enough of the antibodies that would have caused the test to return positive for the disease.

He continued to feel tired and have severe muscle aches. Vision in one eye deteriorated to the point where it was if he was looking through a piece of wax paper.

It was not until this April that he was correctly diagnosed with Lyme disease and began receiving antibiotic treatment. Within two weeks of treatment, his vision started to return and his energy level went up.

The man, who wished to remain anonymous, advised that if a tick bites you you should put it in a bag and freeze it. If you start to feel bad, take the tick to a hospital or clinic where it can be tested. It&#8217;s the same advice medical professionals give.

To avoid getting bitten by a tick, use an insect repellent that contains DEET. Also consider wearing long pants and long-sleeve shirts and, since ticks commonly crawl onto their victims from brush or high grass, tucking pants into socks or boots. Military uniforms treated with permethrin provide good protection against ticks.

Mowing grass and keeping it short will keep ticks at bay in your yard.

After returning from an area where ticks are likely to be, perform a tick check by looking carefully at all parts of your body that you can see, Price said.

If a tick bit you and is still attached, use tweezers to pull it out. Grab the tick as close to the skin as possible and pull it straight out, Price said. If you tear the tick, try to get as much out as you can and put an antibiotic cream on the spot of the bite.

Burning the tick or covering it with alcohol to make it release its grip are bad ideas and could only make things worse, Price said.

&#8220;The danger of doing it incorrectly like burning it, irritating it with alcohol or something like that is that diseases are transmitted through its saliva,&#8221; he said.

&#8220;When you burn it or contact it with a chemical, it salivates more because it gets agitated. If it hasn&#8217;t already transmitted something, you increase the chances exponentially by doing that.&#8221;