Thunderbirds team gets extreme this summer 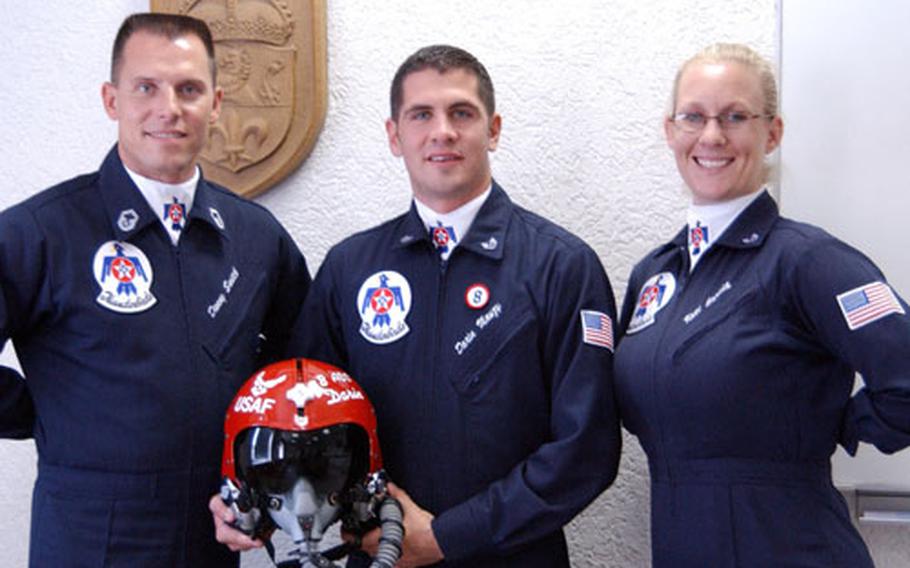 GRIESHEIM, Germany &#8212; Three support members of the Air Force Thunderbirds&#8217; precision flying team temporarily stepped away from the runway and right into the Extreme Summer program Wednesday to let people in on what it takes to be a part of one of the Air Force&#8217;s premiere recruiting teams.

The Thunderbirds, founded May 25, 1953, works to foster interest in the Air Force and encourage people to join.

The flying team visits schools as well as plans and performs in its own air shows. Many of the team&#8217;s appearances are in towns where the Air Force influence may be just out of reach.

Thunderbird members have to apply for slots on the team and only the best make it. By selecting the top pilots, crew and other personnel to perform on the Thunderbirds, the team hopes to put its best foot forward when showing what the Air Force can do for a person, Garcia said.

To even be considered, Thunderbird pilots must be at least a captain, have 10 years of commissioned service, a minimum of 1,000 flight hours and be fighter-rated. Enlisted airmen must have a career rating of at least a level five.

Pilots selected for the team must relearn flying maneuvers with a little more of an edge &#8212; faster, lower and closer.

Live images from the cockpit answer that question. While in the air, video is transmitted to large screens near the spectators who can see for themselves the amount of skill required for each maneuver.

While it will most likely be 2005 before the entire Thunderbird team returns to Europe, Smith, Mauzy and Garcia will visit their last Extreme Summer host at Spangdahlem Air Base on Thursday.

The Extreme Summer Program is headed by U.S. Air Forces in Europe Services and is designed to get people, particularly youths, involved in their communities. This year&#8217;s program ends Sunday.