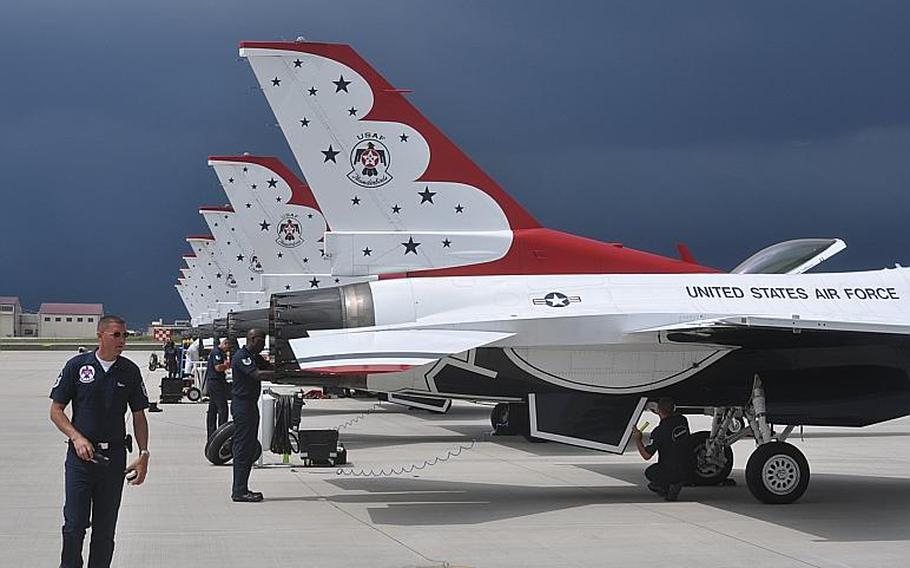 Buy Photo
Crewmembers work on the nine F-16s of the U.S. Air Force&#39;s Thunderbirds shortly after they landed Thursday at Aviano Air Base, Italy. The jets will be taking part in an Italian air show Saturday and Sunday in nearby Jesolo and will be using Aviano as their home base until they depart Tuesday for Denmark. (Kent Harris/Stars and Stripes)

AVIANO AIR BASE, Italy &ndash; The U.S. Air Force Thunderbirds are back in Italy, four years after celebrating Independence Day with a show over Aviano Air Base. The aerial acrobatics team participates Saturday and Sunday in an Italian air show over nearby Jesolo.

It&rsquo;s the third stop on a European tour that has already included shows in Turkey and Romania and will feature performances in Denmark, Finland, Bulgaria, Belgium, England and a flyover of the Baltic states.

Weather permitting, the team is set to perform for about 30 minutes Saturday and Sunday starting at about 6 p.m. Prior to taking off each day, they&rsquo;ll be part of a ground show at Aviano.

About 80 pilots and crewmembers in nine F-16s and a C-17 arrived Thursday just before a thunderstorm.

Capt. Ryan Riley, one of the pilots scheduled to perform, said the show in Jesolo will be the first time the team has performed over water in a while.

Thousands of spectators are expected to fill the beaches in the seaside town to watch multiple performances by teams from Italy and other countries during the two days.

Riley, 30, of Florence, Colo., will also be among those visiting schools on the base at Aviano during the Thunderbirds&rsquo; stay, which is expected to last until Tuesday.

&ldquo;Jesolo Air Extreme&rdquo; will be held from 3:30 to 7 p.m. Saturday and Sunday in Jesolo, a seaside town east of Venice and south of the A4 autostrada. It&rsquo;s about 45 minutes from Aviano and an hour from Vicenza. Italy&rsquo;s aerial acrobatics team, the Frecce Tricolori, and teams from other countries also will perform. Admission is free.