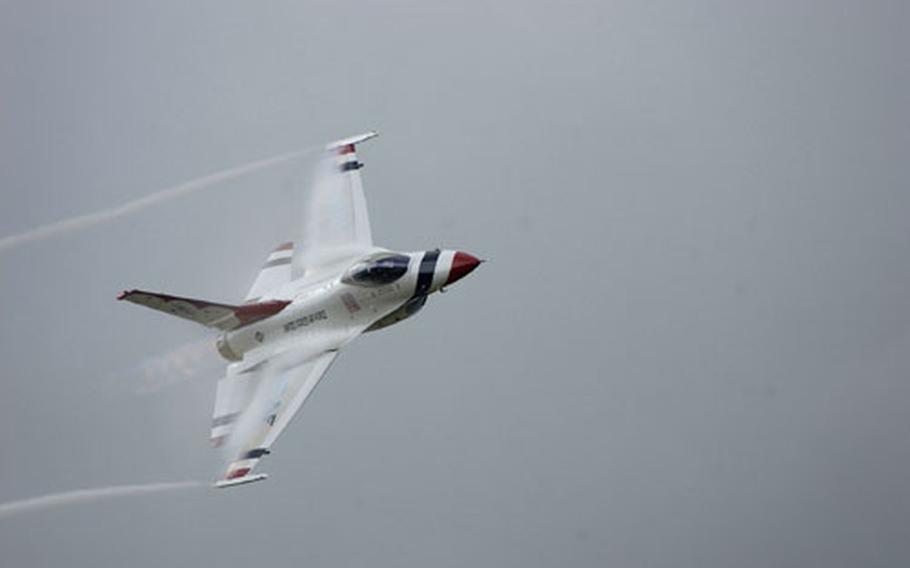 One of the Thunderbirds flight demonstration team, piloted by Maj. Todd Canterbury, flies over the crowd at Sunday&#39;s Osan Air Base air show. (Courtesy of U.S. Air Force)

OSAN AIR BASE, South Korea &#8212; Awestruck spectators crowded the flightline under sunny skies here Sunday to watch as a famous team of U.S. jet pilots roared above the landscape in a series of miles-high, hairbreadth maneuvers.

The precision loops, rolls, climbs and &#8220;knife-edge passes&#8221; of the U.S. Air Force Thunderbirds were the climax of a daylong air show that drew more than 9,000 spectators, mostly Korean, to this air base 48 miles south of Korea&#8217;s Demilitarized Zone.

Susan Han, a pastor&#8217;s wife from nearby Suwon City, said she got her biggest thrill from what the Thunderbirds call the &#8220;knife-edge pass&#8221; &#8212; two F-16s tearing head-on toward each other in what looks like a collision-in-the-making.

That Sunday&#8217;s 2004 Air and Space Power Day happened at all marked a big break for the show&#8217;s Osan planners. They&#8217;d spent weeks in intensive preparations, knowing all along that bad weather could short-circuit them on show day: Last September&#8217;s show was called off amid drenching rains.

But Sunday&#8217;s weather was hot and hazy, and as of 2 p.m., 7,200 ticket-holding spectators had come through the base&#8217;s main gate, said Maj. Wesley Miller, a base spokesman. Members of the U.S. military community swelled total attendance to about 9,000, he estimated.

It might have been double that, base officials said last week, had they not decided to restrict access for security reasons. They&#8217;d originally meant to open the show to the general public but scrapped the plan after South Korean authorities passed on intelligence that raised unspecified &#8220;security concerns.&#8221;

Base officials instead distributed 8,000 tickets to their South Korean air force counterparts and to local Korean civic leaders.

From beginning to end, Sunday was a day of smiles, small children, Korean women with umbrellas shielding them from the bright sun, the blue smoke of cooking fires and the smell of chicken and polish sausage on the grill.

Osan&#8217;s gate opened to ticket-holders at 8 a.m.; by noon, the show had taken on the look and feel of a vast picnic, with people finding a comfortable spot on the grass or escaping the bright sun by sitting on the concrete in the shadow of an aircraft&#8217;s tail-section or underside.

Han Ah-reum, 13, got there early with her brother Oo-ju, 10, their mother and their aunt. The children&#8217;s father is a South Korean F-5 fighter pilot based at Osan; the kids were eager for a closer look at their dad&#8217;s world, family members said.

The day likewise gave U.S. airmen a chance to show their families something of the Air Force.

Tech. Sgt. Steven Palk works in a unit that keeps the 51st Fighter Wings&#8217;s A-10 attack planes in working order.

As the start of the Thunderbirds demonstration drew closer, the entire crowd migrated to the edge of the flightline. The six white jets began taking off, as scheduled, at the stroke of 3 p.m.

No maneuver got that effect more than the &#8220;diamond clover loop,&#8221; in which the formation of gleaming jets came in low but unheard from behind the spectators. With a gathering roar, they shot far out overhead, trailing smoke; in the next moment they were about a mile off, shooting almost straight skyward, until they were about three miles up.

Then, in what seemed like the crowd&#8217;s most enthralled moment, spectators began to realize the jets had reversed direction and now were dropping through the air like a roller-coaster that&#8217;s just gone into a steep downgrade. When the jets leveled out of their dive and pulled off to the left just 300 feet from the ground, the crowd broke into applause.