Thrust into Afghanistan by war, ex-Soviet becomes a keeper of its history 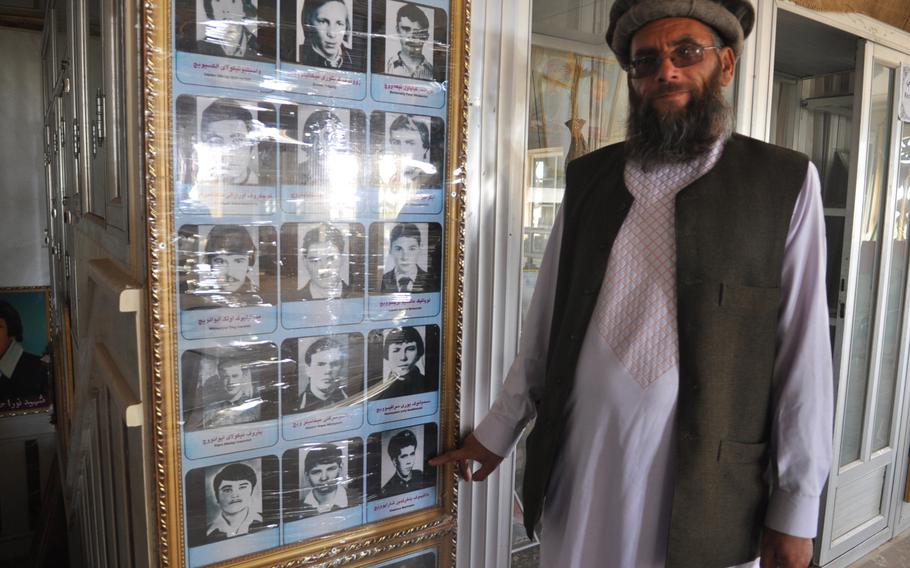 Buy Photo
Sheikh Abdullah points at a photo of himself as a young Soviet soldier in Afghanistan, when he went by his birth name, Bakhretdin Khakimov, at Herat, Afghanistan's Jihad Museum. (Heath Druzin/Stars and Stripes)

HERAT, Afghanistan — A most unlikely ambassador has become a living centerpiece in this Afghan city’s Jihad Museum, dedicated to the memory of the mujahedeen, the Islamist fighters who fought a successful guerrilla war against the Soviet Union.

He is known now as Sheikh Abdullah, sports a flowing black beard, is a strict Muslim, and dresses in a shalwar kameez, the traditional tunic and baggy pants favored by Afghans. He speaks unaccented Dari (the local language) and is a respected tribal leader.

But Abdullah’s history is more colorful than his new persona. He first came to Afghanistan as Soviet intelligence officer Bakhretdin Khakimov, and his mission was to kill the mujahedeen.

Though he grew up in neighboring Uzbekistan, his life there could not have been farther from the one he has now adopted. An ethnic Uzbek, his father was a KGB officer. As the son of an intelligence officer (his brother, too, was in intelligence), he had a comfortable, secular life in Samarkand and a doting girlfriend who even visited him in Afghanistan, where she was issued an AK-47 just in case. He smoked and drank with friends and bought wholly into the Soviet atheist ideology.

He says he spent three years fighting with the Soviets in Afghanistan, and by the end of his time with the Soviet army, he was commanding 100 soldiers.

“It’s very strange when I look back,” he said, remembering his former life, which changed dramatically in 1983.

That year he found himself in a fierce battle in Herat province’s Shindand district and was shot in the head and the back. Everything went dark.

Days later, he awoke to a disorienting scene: He was in an Afghan family’s mud-wall home, though he did not know where. Would he be imprisoned or executed? He had no idea.

“When I opened my eyes, I was with a family,” he said. “There were children looking at me, and they were speaking a language I didn’t understand.”

But none of his fears came true. He says he was struck by the kindness of the family members, who helped nurse him back to health. He would ask for alcohol, and they would gently explain that they could not provide it. But when he asked for cigarettes, one of them traveled miles on foot to buy him a carton of the most expensive available.

“I have good memories of them,” he said. “I am very thankful for what they did.”

It was during his recovery that he began to learn about Islam and his views started to change dramatically. By the time he regained his strength, he was a devout Muslim. When he left the family’s home, he joined the mujahedeen and battled his former comrades. He never returned to the Soviet Union.

The Soviet Union occupied Afghanistan in 1979, in an effort to prop up a left-wing regime facing an uprising by Islamist forces backed by the United States, China, Saudi Arabia, Pakistan and others. Soviet troops pulled out of Afghanistan in 1989, and the secular regime collapsed three years later. About 15,000 Soviets died during the 10-year conflict.

In a classic example of “blowback,” some of the mujahedeen supported by the U.S. and UK in the 1980s later fought against the same nations that had armed them.

After the Soviet war ended, Abdullah became a farmer, but his fighting days were not over. When the Taliban came to power in 1996, he took a job as a security guard for Mullah Baradar, co-founder of the Taliban, but later soured on the movement when Baradar refused to release Abdullah’s friend from prison. Eventually he took up arms again, this time with the anti-Taliban Northern Alliance — which was now, paradoxically, backed by Russia.

Abdullah eventually married an Afghan woman and had a daughter with her. His wife has since died, and he is now engaged to another Afghan woman. Like many Soviet soldiers who went missing in action, Abdullah was assumed to have been killed on the battlefield, but he was tracked down earlier this year by researchers with a Russian government project that seeks to determine the fate of missing Soviet soldiers.

Moscow says more than 200 Soviet soldiers are still listed as missing in action — including 30 to 40 who may still be in Afghanistan or Pakistan. The government has granted immunity from prosecution to all Russians who defected to the enemy side during that conflict.

The best-known of the MIAs may be Nikolai Bystrov, a lieutenant captured by guerrillas in 1983. He eventually became the personal bodyguard of Northern Alliance leader Ahmed Shah Massoud, who battled the Taliban during the 1990s and was assassinated just two days before the Sept. 11, 2001, attacks in the United States. Bystrov, who now lives between Russia and Afghanistan, remains active in a veterans’ group searching for MIAs.

When Abdullah speaks on the phone to remaining family members in Uzbekistan, some still try to convince him to return to his birthplace, but he says he is Afghan now and has no plans to leave. He recently spoke on the phone to his brother, who expressed interest in attending Abdullah’s upcoming wedding. It would be the first time the brothers have seen each other in more than 30 years.

Seven months ago, the Jihad Museum’s director, Sayed Abdul Wahab Qattali, approached Abdullah about working for the museum, where he now talks to school groups, researchers and other visitors. He says it doesn’t trouble him to spend his days reliving the wars, and he enjoys his role as a living bridge to Afghanistan’s fight for independence.

“I’m very happy to be here around all of this history,” he said.

For Qattali, Abdullah’s presence is more powerful than the museum’s glass cases full of wartime weaponry or even its 360-degree diorama of key battles in the fight against the Soviets: “This living example completes our museum.”