Thrifty shoppers still have a home on Okinawa 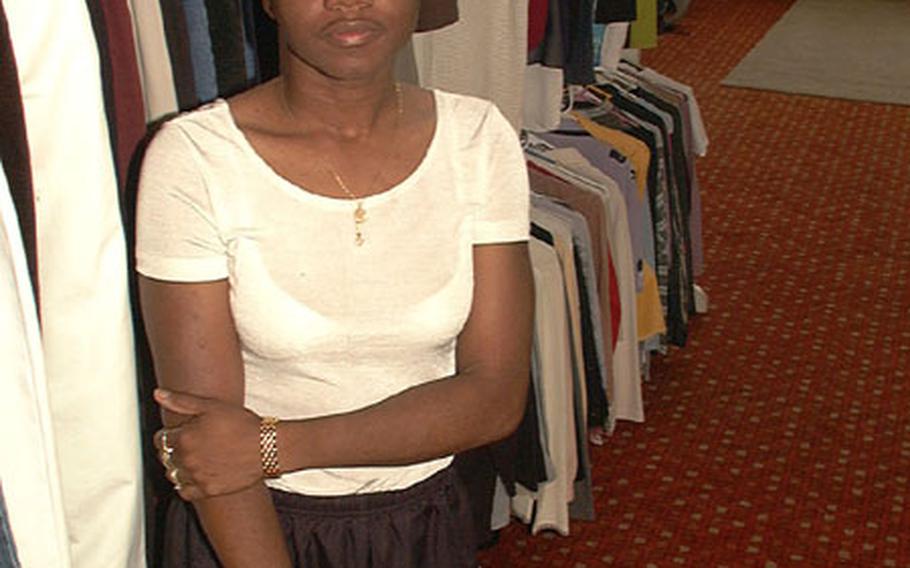 Andrita Stephens, manager of the Marine Enlisted Spouses Club Thrift Shop on Camp Foster, Okinawa, stands among aisles of clothes. The thrift store was rumored to be closing, but is keeping its doors open as staff members work to comply with base regulations. (Mark Oliva / S&S)

CAMP FOSTER, Okinawa &#8212; Good news for young married Marines: One of their top savings places has been saved.

The Marine Corps Enlisted Spouses Club Thrift Shop narrowly missed being shut down, which would have cut out the only Marine store where troops and their families can buy used items for dirt-cheap prices.

Rumors that the shop was being shuttered ran rampant, even being posted as an announcement on the local cable access channel.

Problems for the thrift shop actually began a few years ago, Stephens said. Money came up missing when the books were balanced; there were moves to close the store.

But Marine Corps officials&#8217; actions indicated they don&#8217;t want the shop to close any time soon. The missing funds were handled internally, Stephens said: They were traced to a former volunteer who is repaying them. A committee, set up to administer private organizations on base, is lending a hand toward ensuring the store continues to follow regulations.

The Thrift Shop was living on borrowed time. Although a part of the base community since at least 1972, it&#8217;s housed in the old library, a building already scheduled to be torn down. The staff consists of three: Stephens, an assistant manager and an active-duty Marine standing in to balance the books. Four other volunteers give up time &#8212; two, up to 96 hours a month and two others 18 hours a month. Still, it&#8217;s not enough to keep up.

That might, she said, allow keeping up with the roughly 60 customers a day. The shop opens its doors every Tuesday through Thursday and on Saturday. Every day, more bundles of donated clothes, toys, decorations and appliances are dropped off. Each bundle is inventoried, tagged and put out for resale.

&#8220;We have sweaters for a dollar,&#8221; Stephens explained. &#8220;We have a lot of young Marines come through here. The chapels constantly send down young families who are having a tough time making ends meet.&#8221;

Without the thrift shop, Stephens argued, a vital part of the base structure would be missing.