Three-year-old is ready for her close-up 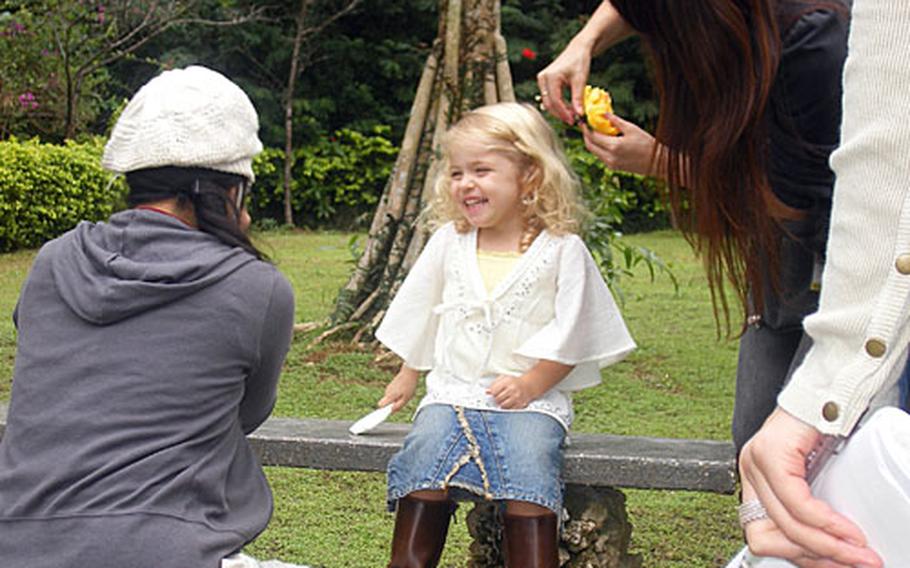 Stylists put on the final touches on Odessa Fredericks&#39; outfit at a modeling shoot Friday in the Southeastern Botanical Gardens. (Courtesy of Suzie Fredericks)

Stylists put on the final touches on Odessa Fredericks&#39; outfit at a modeling shoot Friday in the Southeastern Botanical Gardens. (Courtesy of Suzie Fredericks) 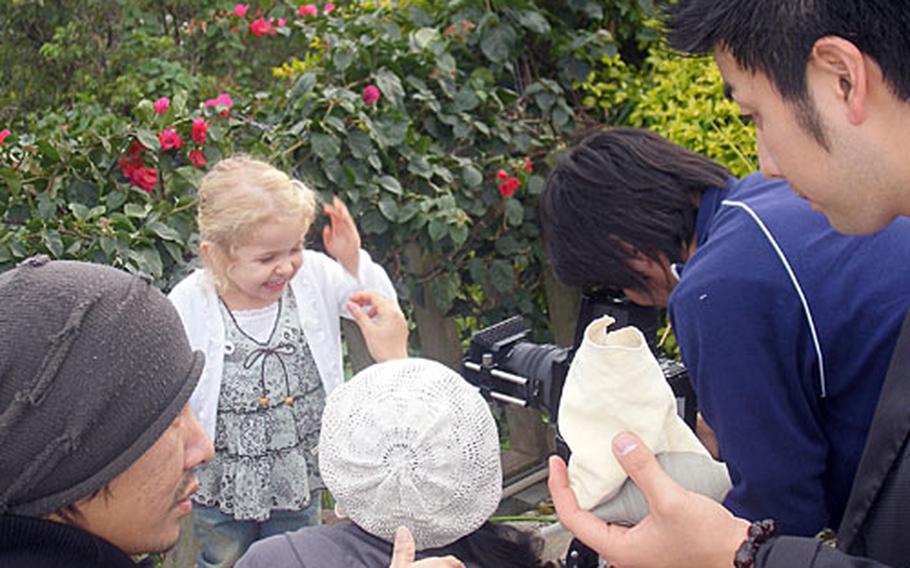 Three-year-old Odessa Fredericks giggles as a stylist tweaks her appearance Friday, before the start of a photo shoot in a neighborhood near Gate 2 Street. Most of the crew speaks only Japanese, but a translator from the casting agency Fredericks is signed with is always on hand, said her mother, Suzie Fredericks. (Courtesy of Suzie Fredericks)

GUSHIKAWA-URUMA CITY, Okinawa &#8212; Odessa Fredericks, the daughter of a Marine officer stationed on Okinawa, is a typical mischievous 3-year-old.

As she tugs on her golden locks, the blue-eyed little girl will tell you she likes to play.

Her days consist of running her parents and two older siblings ragged and watching cartoons.

She also loves to play dress-up.

What&#8217;s not typical about Odessa is that sometimes she dresses up for what she calls her &#8220;princess photos&#8221; &#8212; occasional modeling gigs for Japanese catalogs.

It began in August, when her mother, Suzie Fredericks, signed Odessa, or Odie, as her family calls her, with Casting Office Lona, an Okinawa company.

Fredericks heard about Lona from a friend of a friend who said the company needed non-Japanese models.

Lona immediately signed Odessa and created her mini-portfolio on their Web site, Fredericks said. &#8220;I think it was the blonde hair and the curls,&#8221; she said.

The casting office, which opened in 2004, does focus on signing foreign models, according to its Web site, but that&#8217;s &#8220;due to the international demand.&#8221; They currently list about 95 non-Japanese models.

By September, Odessa had her first assignment: winter fashions.

That first session was intimidating, and it took some coaxing to get Odessa to smile and act natural, her mother said.

It&#8217;s not easy to get a 3-year-old to do anything on demand, Fredericks said, and she added it&#8217;s also important to her that Odessa enjoys the experience.

It can take photographers five to 15 minutes to get a photo they&#8217;re happy with, and a full session can last four or five hours, Suzie said.

Odessa wasn&#8217;t thrilled about modeling again until she saw her pictures in a catalog, Fredericks said. &#8220;Then she was excited. After she saw the catalog, she wanted to do it again.&#8221;

She put that style into practice again recently.

Odessa was comfortable enough with the photographers that she started playing with them, touching the camera lenses and making faces, Fredericks said.

The Frederickses said Odessa&#8217;s modeling is not about earning money &#8212; any money she earns goes into a college savings account.

&#8220;It&#8217;s about a great opportunity to bring home a unique souvenir and a chance to get involved in a different culture,&#8221; Fredericks said.