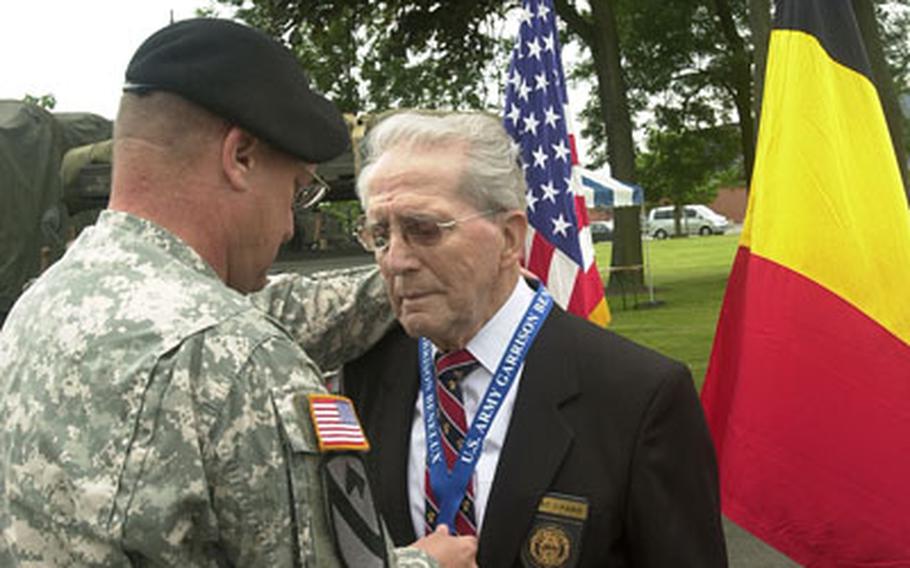 Maurice Sperandieu, a Belgian soldier who was attached to Gen. George S. Patton’s 3rd Army, was one of three Belgians who received the Outstanding Civilian Service Medal. He is one of the founders of the annual Bastogne Perimeter Walk, now in its 30th year. U.S. Army Col. Dean A. Nowowiejski, the U.S. Army Garrison Benelux commander, presented the award. (Kevin Dougherty / S&S)

CHIEVRES, Belgium &#8212; One recipient served in the Belgian underground. Another took part in the Battle of the Bulge. A third honoree has been the driving force behind four monuments and a museum to U.S. forces in World War II.

During &#8220;this terrible struggle,&#8221; as Maurice Sperandieu referred to it, he and many other Belgians supported their American liberators in ways large and small. And that support continued well after the final shot was fired.

Recently, in tribute to Sperandieu and two other Belgian men &#8212; Marcel D&#8217;Haese and Paul Delahaye &#8212; U.S. Army Garrison Benelux presented the three with the service&#8217;s highest award for civilians not employed by the military.

The Outstanding Civilian Service Medal is roughly the equivalent of the Legion of Merit, said Marie-Lise Baneton, spokeswoman for USAG Benelux. Medals of this sort are the exception, not the rule.

Sperandieu is best known for the annual walk in Bastogne, Belgium, that commemorates the Battle of the Bulge, the largest land battle in Army history. Each December, hundreds of participants, from American Boy Scouts to regional re-enactors, walk a different section of the old perimeter line that was held by the U.S. Army during the siege of Bastogne. Last year, about 2,300 took part in the walk, which Sperandieu helped start 30 years ago.

Sperandieu, who turned 81 on Saturday, has a colorful war record, having served in the Belgian underground and later with a Belgian unit attached to Gen. George S. Patton&#8217;s 3rd Army.

He couldn&#8217;t attend the recent ceremony due to illness, but D&#8217;Haese fought in the Battle of the Bulge and later linked up with Russian forces in Germany. After the war, he became president of a veterans&#8217; association and has long been a fixture at commemorative events, overseeing more than 75 ceremonies through the years.

Delahaye was just a boy during the war, though he vividly remembers his family heaping their belongings atop a wagon and joining the ranks of the displaced.

A veterinarian later in life, Delahaye has left his mark by establishing several World War II memorials and a museum to the men, including Americans, who fought.