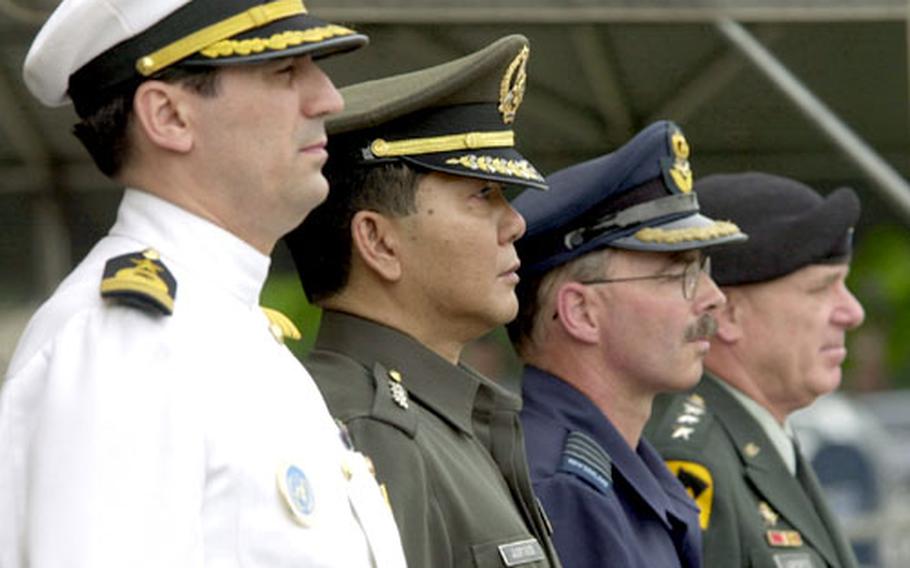 YONGSAN GARRISON, South Korea &#8212; The United Nations Command gathered at Knight Field on Thursday to bid farewell to three of its liaison officers.

Col. Raynard Ronnie Y Javier of the Philippines, Group Capt. Athol James Forrest of New Zealand and Capt. Tufan Acioglu of Turkey were honored for their work with the command.

Gen. Leon LaPorte, commander of U.S. Forces Korea, the U.N. Command and the Combined Forces Command, presided over the ceremony.

LaPorte told the audience the three were &#8220;professional and skilled military officers&#8221; and that &#8220;today we celebrate their contributions and achievements.&#8221;

He said in their role as liaison officers, they helped show the commitment to the armistice.

Forrest said it was &#8220;a sad duty to say farewell.&#8221; He also wished for success with future dealings with North Korean leaders whom, he said, &#8220;squandered&#8221; opportunities offered them by South Korea and other nations.

Javier said he enjoyed looking at the U.N. Honor Guard, comprised of troops from various nations &#8212; including the Philippines.

Acioglu said he knew taking the job in South Korea would be interesting but he didn&#8217;t realize how interesting it would be.

The three are being replaced by Col. Timothy Lee Gall of New Zealand, Col. Fahrettin Aydin of Turkey and Col. Jonas Sumagaysay of the Philippines.

The U.N. Command is a U.S.-led, 15-nation consortium that monitors the Armistice Agreement that ended Korean War fighting in July 1953.