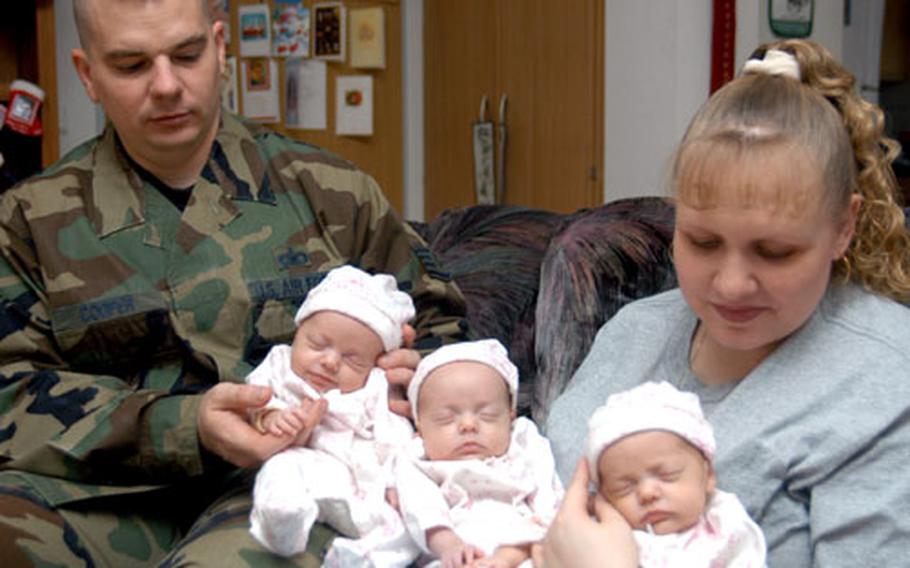 Staff Sgt. Kevin Cooper of the 435th Air Base Wing Security Forces Squadron and his wife, Jody, cradle their 6-week-old identical triplets, from left, Aspen, Trinity and Payton, at the home of the recently expanded family in Landstuhl, Germany, on Tuesday. (Ben Murray / S&S)

LANDSTUHL, Germany &#8212; When Staff Sgt. Kevin Cooper of the 435th Air Base Wing Security Forces Squadron and his wife, Jody, decided to reverse Kevin&#8217;s vasectomy to have one more child, they were hoping for a girl.

The Coopers already had three boys, ages 4, 8 and 11, and hoped to round the family out with a daughter. In the fall, they got what they wanted ... and then some.

Without the use of fertility aids and lacking any history of multiple births in their families, the chance of the couple conceiving identical triplets was extremely small, doctors told them, hovering at about 1 in 100,000.

But conceive them they did, and a specialist gave the news to the Coopers in June.

The work of carrying three babies at once, Jody said, &#8220;wasn&#8217;t that bad,&#8221; though it required a three-week stay at Landstuhl, and five weeks of postnatal care for the children at the hospital.

Now in late December, with a trio of healthy babies at home for the holidays, the Cooper family is working on restructuring life around the new arrivals.

The three girls go through 25 diapers and 30 bottles in a 24-hour period, Kevin said, and the parents have run into some unique problems that come with triplets, such as: Which baby is which?

To solve the identity problem, the Coopers have made little color-coded arm bands for the girls, and have started to identify them by their tiny marks and blemishes, he said.

The Coopers have also received generous help from their extended families and local church, they said, but no matter what level of help parents receive from friends and relatives, juggling three identical newborns is a minute-by-minute logistical puzzle.

Sitting in her living room this week, a baby in each arm and one with her husband, Jody tried to get up for a second to get something from behind the couch, and ended up just kind of looking around for a moment, trying to figure out how to do it.

Kevin came over, and between the two of them, they safely transferred babies back and forth until she could stand, still holding one.

Outside the home, things are just as difficult, the Coopers said.

They can no longer ride together in one car (their minivan only seats seven), and they have to buy things such as clothes and groceries in triplicate &#8212; plus things for the boys.

Carting three babies and managing three sons in public draws a definite reaction from lots of people, who generally express a mix of pity and wonder at the thought of caring for such a large family, Jody said.

But the Coopers, who said that at one point they had decided to have only two children, said their new daughters are anything but a burden.