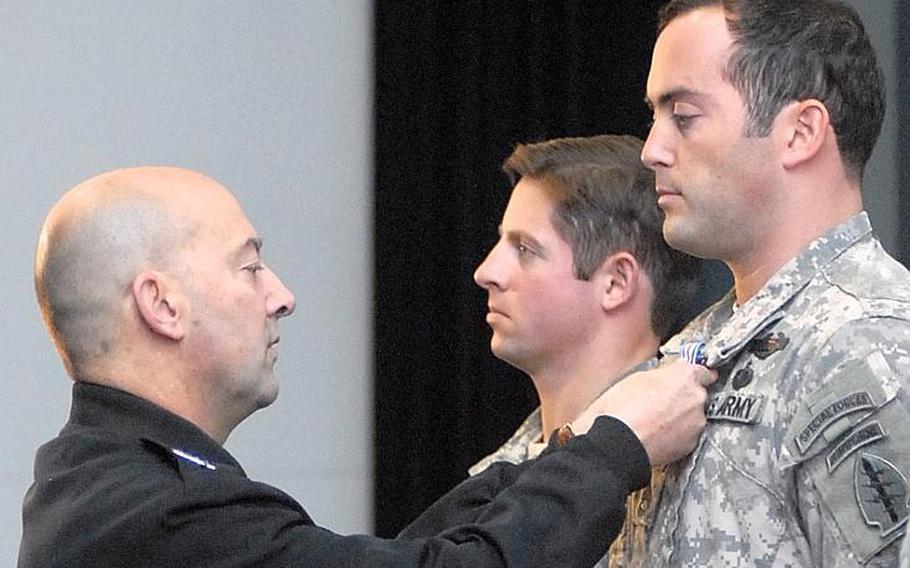 Buy Photo
Staff Sgt. Jeffery R. Musgrave received a Bronze Star Medal with "V" for valor for courage under fire in Afghanistan during a ceremony Tuesday at Patch Barracks in Stuttgart, Germany. (David Rogers/Stars and Stripes)

STUTTGART, Germany &mdash; When Capt. David G. Fox regained consciousness shortly after a massive roadside bomb detonated nearby, the only words his comrades down the mountainside could understand on the radio was the message: &ldquo;urgent &hellip; surgical.&rdquo;

After hearing their commander&rsquo;s muffled radio call and seeing a plume of black smoke billowing high above on the ridgeline in Kapisa province, Afghanistan, Fox&rsquo;s men sprung into action.

Under heavy enemy fire, Sgt. 1st Class McKenna L. Miller and Staff Sgt. Matthew D. Gassman began a desperate climb up the mountain. Then they and Fox made a harrowing journey back down &mdash; one carrying an injured Afghan soldier, another a dead French trooper, and the thirdproviding cover fire, according to the medal citations.

On Tuesday, Fox, Gassman and Miller, all of the 1st Battalion, 10th Special Forces Group in Stuttgart, were pinned with Silver Stars during a ceremony at U.S. European Command headquarters on Patch Barracks.

Two other soldiers also were honored for separate actions. Staff Sgt. Jeffery R. Musgrave received a Bronze Star Medal with a &ldquo;V&rdquo; for valor for his actions during a deployment in Wardak province in 2010. Musgrave, despite being wounded three times in the arm, repeatedly left the safety of covered positions to fire on the enemy and ensure his team gained the upper hand in the fight, according to his medal citation.

Spc. Willie Smith was honored for bravery while in garrison. Smith, an administrator assigned to 1-10, received the Soldier&rsquo;s Medal for helping rescue an elderly couple from a burning building earlier this year in B&ouml;blingen.

&ldquo;They are casual heroes who walk humbly among us,&rdquo; Repass said. &ldquo;We have the opportunity to recognize their actions publicly, because the truth is, and we all know this, they themselves would never tell this story. So we&rsquo;ll tell it for them.&rdquo;

It has been one year since the Dec. 17, 2010, battle for which Fox, Miller and Gassman were recognized Tuesday.

During the nearly three-hour battle, the Green Berets would repeatedly expose themselves to enemy fire, according to citations of their deeds. Not only were they fighting for each other, they were protecting their French and Afghan comrades.

&ldquo;Anybody we go on a mission with, everyone is going to come back,&rdquo; Fox said. &ldquo;It is not an option to leave someone out there.&rdquo;

On Monday during an interview, the men recalled the chaos and danger of that day.

&ldquo;You&rsquo;re just going on instinct and detaching yourself from what&rsquo;s going on around you,&rdquo; Fox said.

After the mountaintop IED blast, which killed the French trooper, critically injured an Afghan commander and knocked Fox unconscious, enemy fire poured in all around the men, who were scouting potential checkpoint locations in the remote Tagab District, Fox said. From the start of the operation, the men had been taking enemy and sniper fire. However, the number of fighters the team faced eventually grew from 10 to more than 70, Fox said.

&ldquo;We were essentially surrounded,&rdquo; said Fox. When the explosion happened, Gassman knew Fox and his comrades were in trouble and began the nearly vertical climb, scaling hand over foot several hundred feet of mountain as enemy rounds landed around him, he said. Once he reached the top, Gassman realized he was too far south, raced back down the mountain and climbed up again. Reaching the team, he began to administer first aid to the injured Afghan commander.

&ldquo;Once you get up there you just go to work,&rdquo; said Gassman.

&ldquo;He&rsquo;s still fighting the Taliban. With one leg,&rdquo; Gassman said of the Afghan commander, whom he recently contacted by phone. &ldquo;He&rsquo;s able to go back and still work and help his village and his people.&rdquo;

During the descent, Gassman carried the Afghan through enemy fire to a landing zone, but it was too dangerous for the incoming helicopter to land. Gassman, now covered in the Afghan&rsquo;s blood, moved the man to a safer landing zone 1,000 meters to the west.

Meanwhile, Fox and Miller, who also made the dangerous climb, were working their way down the mountain. While Miller carried the body of the 200-pound Frenchman, Fox laid down gunfire to protect his team sergeant, according to the commendation.

Struggling under the weight, Miller fell repeatedly, picked the Frenchman up again and moved forward.

&ldquo;In risking his own life to recover the fallen French officer, Sergeant Miller demonstrated the resolve and fortitude that exemplifies the spirit of the U.S. Special Forces,&rdquo; his medal citation stated.

&ldquo;Throughout their perilous descent Captain Fox again and again placed himself between his Team Sergeant and the threat of the voluminous enemy fire,&rdquo; according to the medal citation.

The battle pushed the men to their physical limits, Fox said.

&ldquo;You realize that when you think you&rsquo;re exhausted you still have a lot more in you,&rdquo; Fox said. &ldquo;You can take your body to greater limits than you think.&rdquo;

Adm. James Stavridis, the head of EUCOM, noted during closing remarks at the ceremony that during the war in Afghanistan some 200,000 medals have been given. Of those, only about 200 have been Silver Stars.

Each of them as well as Musgrave and Smith deserved the special recognition, he said.