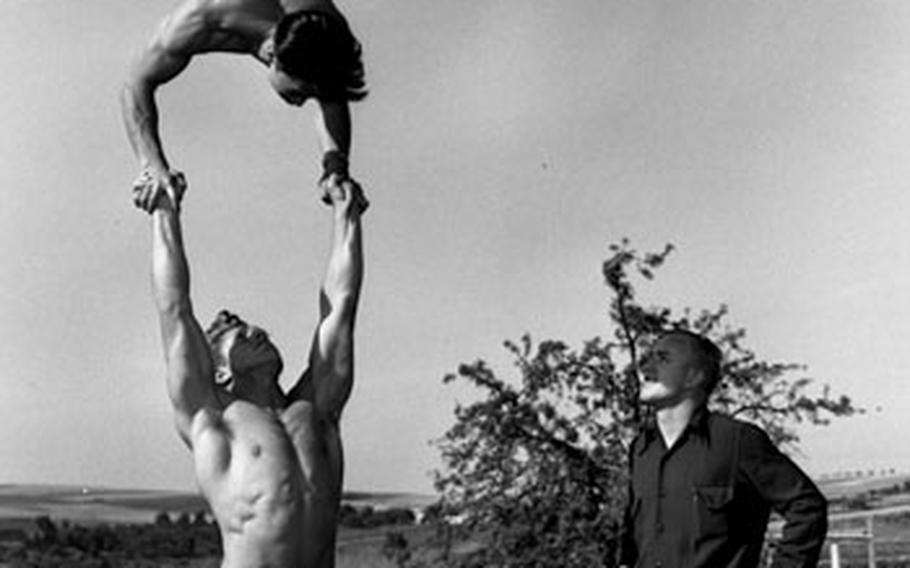 Tommy Kono gets a lift from Clyde Emerich as Jack Bluebaugh watches. (Roger Ruhlin/Stars and Stripes)

ZWEIBRUECKEN, Aug. 19 &mdash; Three of the strangest casuals to appear at this replacement depot are former members of the U.S. Olympic team, including one who won a gold medal and broke a world and Olympic record to do it.

All three athletes had been serving in Stateside assignments prior to the Games, and all had been placed on TDY in order to compete.

Of the three, only Bluebaugh knew before he left for Helsinki that he was to be assigned to USAREUR after the Olympics. He had qualified for the Olympic team way back in April and had been on special duty since then, training for the international competition.

Both Kono and Emerich had been stationed at West Coast camps and received their European orders while at Helsinki.

All three flew direct from Helsinki to Frankfurt and then came here for assignment. But what confusion!

None of them had a uniform &mdash; they were still in the States. The Olympic trio were the only U.S. soldiers within Germany out of uniform and out of trouble at the same time.

In the case of Kono and Emerich, the trouble arose because they had been transferred from the ZI to USAREUR while they were at Helsinki. All their issue was in the States, and still is as far as they know. Bluebaugh's gear, though, is en route, somewhere between Ft. Meade, Md., and Heidelberg.

Emerich, a handsome blond, was troubled by a pulled leg muscle and couldn't do his best in the Olympic competition. He placed eighth in his class with the title going to Russia's T. Lomakin, who beat out favorite Stan Stanczyk, U.S.

Bluebaugh, though he didn't compete, aided the grapplers by serving as a spotter. He declared that U,S. and Olympic styles of wrestling differ so greatly that it was very difficult for the U.S. matmen to successfully engage their opponents.

All three men have been assigned to the 7812th SCU in Heidelberg as athletic instructors and, after having received a new clothing issue, are now getting settled in their new jobs.