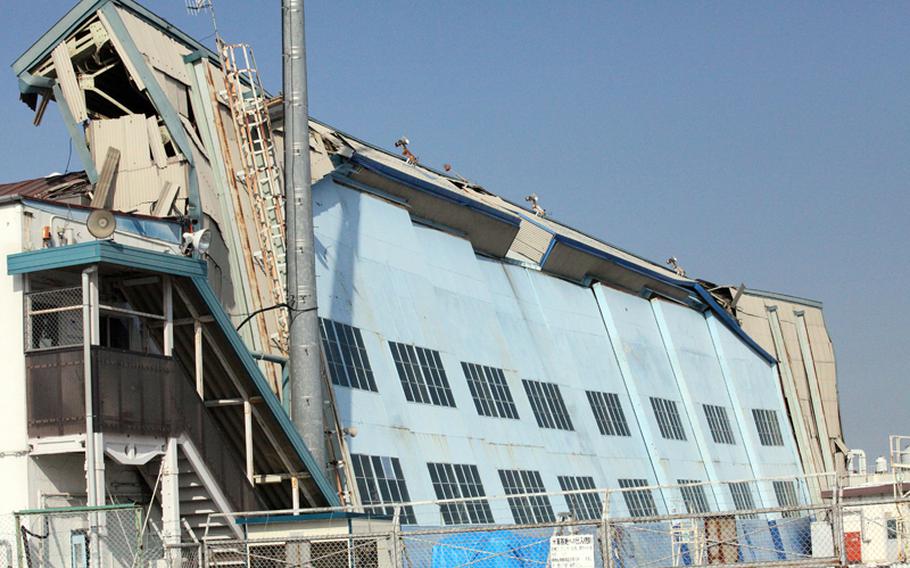 YOKOSUKA NAVAL BASE, Japan — At least three of the Navy’s four P-3 Orion surveillance aircraft damaged when snow collapsed a Japanese contractor’s hangar in February were crushed beyond repair, according to a media report.

A spokeswoman at Naval Air Station Patuxent River, Maryland, told the Navy League’s Seapower magazine on May 5 that Navy damage assessments concluded that the P-3s were totaled by unusually heavy snowfall at the NIPPI Corp. maintenance facility near Naval Air Facility Atsugi.

“Of the four aircraft, three have been assessed as a total loss,” said LaToya Graddy, spokeswoman for the Navy’s Maritime Patrol and Reconnaissance Aircraft Program Office. “The remaining aircraft will be assessed for serviceability once the roof structure is removed. All four aircraft were receiving normally scheduled depot-level maintenance.

The remainders are either in the depot for modifications for repairs or are scheduled for depot induction, she said.

The 550-foot-long hangar housed 10 aircraft, including the U.S. Navy planes and six variants of the Japan Self-Defense Force P-3. The 50-foot-high roof dated to the 1950s, Japanese officials said following the hangar collapse.

After a warmer-than-average winter with little snowfall, the Tokyo region, where the NIPPI facility is located, was blanketed by 2-3 feet of snow in February.

The P-3 Orion has patrolled the Pacific on anti-submarine and surveillance missions since its introduction in the 1960s. Each four-engine turboprop aircraft costs $36 million, according to the U.S. Navy’s Fact File website.

The Navy is slowly phasing out the P-3 in favor of the new P-8 Poseidon aircraft, which has an upgraded airframe and avionics enhancements. The P-8 planes began arriving at U.S. bases in Japan in December.