Sgt. Sam Meek, left, greets buddies that he has not seen since he was wounded in Iraq in January and sent to a burn center in Texas. He and two other 3rd Recon Marines, wounded and returned to the States during the unit’s deployment to Iraq, flew to Okinawa to be part of Tuesday’s welcome-home reception at Camp Schwab. (Cindy Fisher / S&S)

Sgt. Sam Meek, left, greets buddies that he has not seen since he was wounded in Iraq in January and sent to a burn center in Texas. He and two other 3rd Recon Marines, wounded and returned to the States during the unit’s deployment to Iraq, flew to Okinawa to be part of Tuesday’s welcome-home reception at Camp Schwab. (Cindy Fisher / S&S) 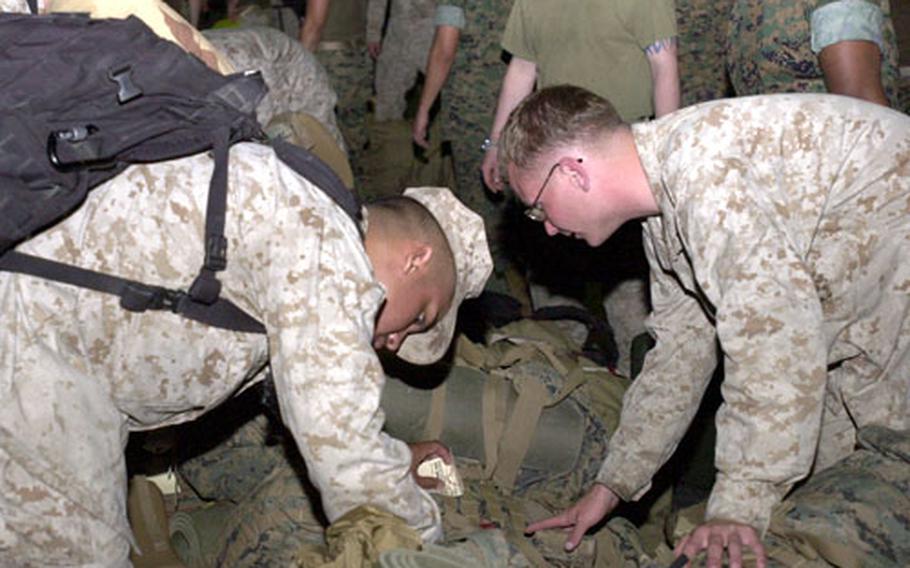 Sailors and Marines search through gear looking for their own packs after returning to Camp Schwab late Tuesday evening. (Cindy Fisher / S&S) 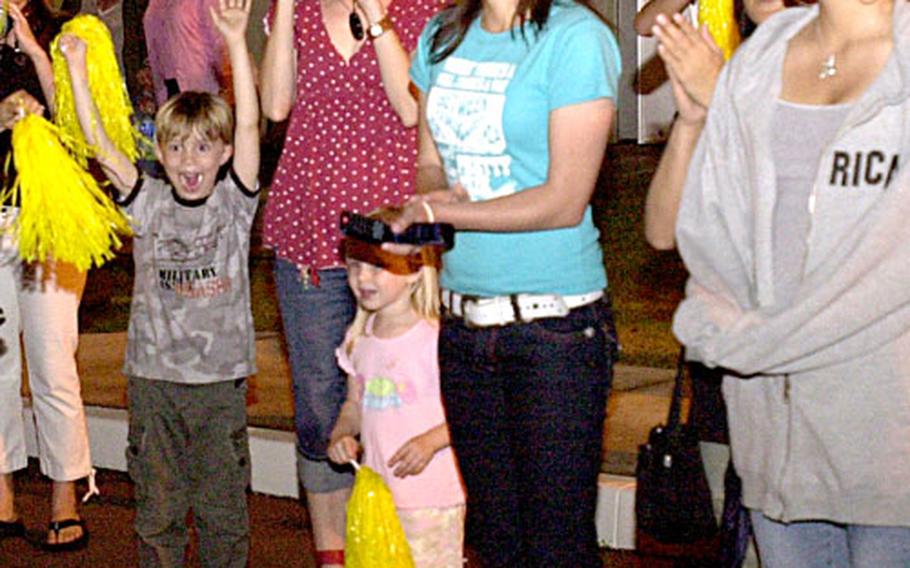 CAMP SCHWAB, Okinawa &#8212; The burns on their bodies bring back vivid memories of war.

Memories of their recon buddies. Those who lived and those who died.

They went to battle together. Looked out for one another.

So when their brothers-in-arms were scheduled to return to Okinawa, three Marines, still recovering in the States from injuries suffered months ago in Iraq, were on a mission.

Sgt. William Edwards and Cpl. Josh D. Pappas, both injured by improvised bombs Dec. 9, and Sgt. Sam Meek, injured in a flash fire Jan. 24, said they had to be at Camp Schwab when the rest of their unit, the 3rd Reconnaissance Battalion, returned Tuesday to Okinawa.

The three arrived on Okinawa before the battalion homecoming. Meek and Pappas will stay through the week before returning to the burn center at Brooks Army Medical Center in San Antonio, Meeks said.

Edwards said he would be leaving a little earlier because Okinawa&#8217;s humidity affects his burns. But he had to be here to see his &#8220;brothers,&#8221; he said.

Pappas said their buddies did not know he, Edwards and Meek were going to be on Okinawa to greet them.

Their buddies arrived at 10 p.m. When the returning Marines started pouring off the buses, Meek, Edwards and Pappas were right up front to give them bear hugs.

But two other Marines who deployed with the battalion in September did not return. First Lt. Nathan M. Krisoff, an intelligence officer, was killed Dec. 9. Sgt. Gary S. Johnston, a radioman, was killed Jan 23.

The returning Recon Marines say they will always carry them in their memories.

Staff Sgt. Branden J. Francis, a communications chief, said he was proud to serve with &#8220;everyone that we lost out there.&#8221;

The battalion&#8217;s commander, Lt. Col. William Seely, said both Krisoff and Johnston were exceptional Marines who &#8220;served with honor and distinction.&#8221;

Pappas learned of Johnston&#8217;s death while at the burn center.

Krisoff&#8217;s death was a personal experience for Edwards, who was injured in the same explosion.

Krisoff was next to Edwards when the Humvee hit the roadside bomb. The explosion &#8220;burned close to 50 percent of my body on the right side,&#8221; Edwards said.

At the burn center in San Antonio, doctors took skin grafts from Edwards&#8217; left side to replace the lost skin. He said he expects be in rehabilitation for the next couple of years.

Edwards described Krisoff as extremely approachable, friendly and a man who knew his job.

Commander: Unit got results while in Iraq

CAMP SCHWAB, Okinawa &#8212; The 3rd Reconnaissance Battalion made a difference in Iraq during its seven-month deployment, the battalion&#8217;s commander said Tuesday.

Now that the battalion has returned, the focus is on transferring some Marines to new duty stations, taking leave and reconstituting the battalion, Seely said.