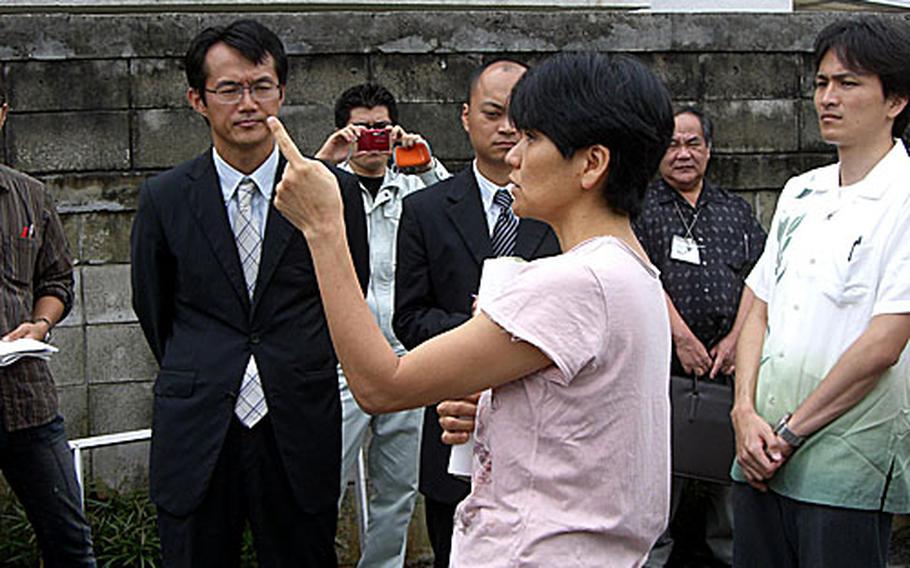 Chief judge (left) of Okinawa branch of the Naha District Court Thursday hears accounts of Tatsuno Kuba at her home, which is about 80 feet away from the air station’s limits. Three judges from the court made a site visit to the surrounding community of Marine Corps Air Station Futenma. So (Chiyomi Sumida / S&S)

Chief judge (left) of Okinawa branch of the Naha District Court Thursday hears accounts of Tatsuno Kuba at her home, which is about 80 feet away from the air station’s limits. Three judges from the court made a site visit to the surrounding community of Marine Corps Air Station Futenma. So (Chiyomi Sumida / S&S) 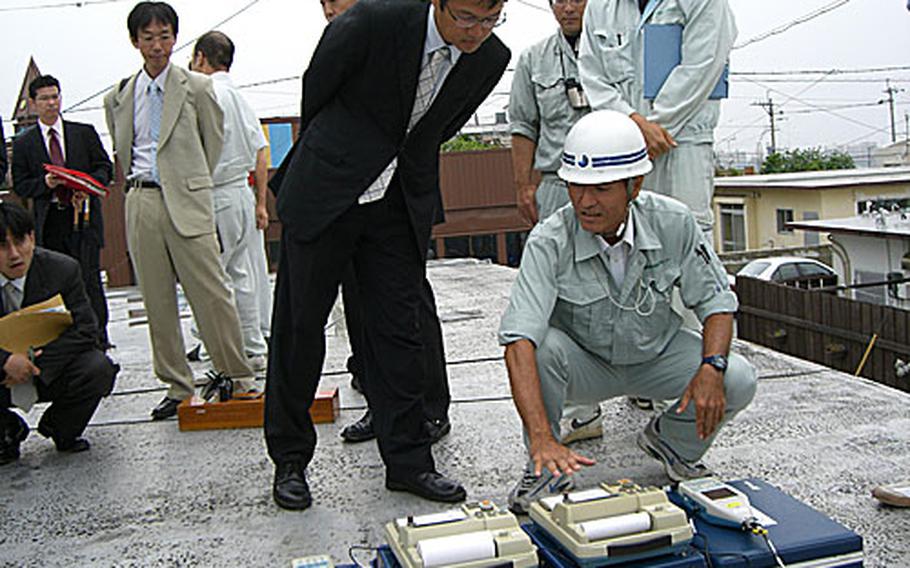 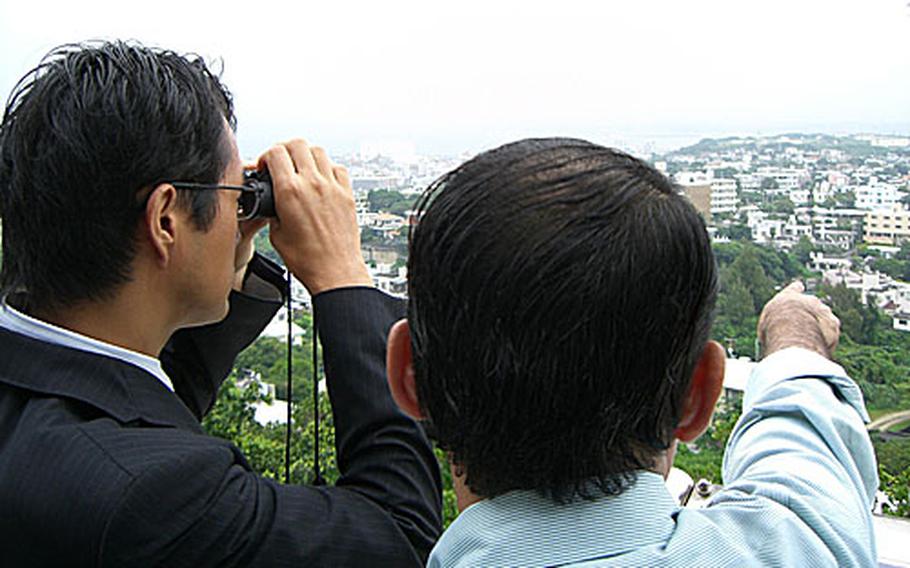 From atop an observation deck at the Kakazu Heights, Kawai (left) peers through binoculars on Thursday. (Chiyomi Sumida / S&S)

GINOWAN, Okinawa &#8212; To the disappointment of Ginowan residents, the skies over Marine Corps Air Station Futenma were quiet Thursday.

Three judges from Naha District Court visited their community near the air station as part of the examination of the noise suit filed by 404 residents who claim aircraft noise from the air station causes them physical and psychological harm. From an observation deck at Kakazu Heights, Chief Judge Yoshimitsu Kawai took in the view of the air station and surrounding densely built-up areas. Isao Tobaru, one of the plaintiffs, showed Kawai how close elementary schools are located to the Marine Corps base.

While about 50 people &#8212; residents, their lawyers, officials of the court, Japanese government and more than a dozen media &#8212; strained their ears, aircraft noise could barely be heard during their 45-minute visit.

In 2002, the residents filed suit against the Japanese government and the base commander, Col. Richard Lueking, charging that aircraft noise is detrimental to their physical and mental health. They are seeking $2.56 million in compensation and a halt to all flight operations from 7 p.m. to 7 a.m.

The suit against Lueking, now retired, was dismissed in September 2004 by the Naha District Court.

The judges&#8217; second stop was to the home of Satoshi Higa in the Ojana district of Ginowan, two houses away from the air station&#8217;s fence line.

&#8220;Here it comes, finally!&#8221; cried Eiryo Nakandakari, one of the plaintiffs, as jet noise approached. It was brief, however, and the sky soon was quiet again.

In one corner of his rooftop, engineers from the Defense Facilities Administration Agency were busy monitoring noise levels. Needles of the instrument moved only when helicopters sporadically circled over the neighborhood.

The third stop was a home located about 80 feet away from the fence line, near the air station&#8217;s Gate 2.

Tatsuno Kuba, a resident of the home, told Kawai how she and her family suffer from exhaust fumes and aircraft noise.

After spending about 45 minutes on the rooftop with the judges and government officials, Kuba came down with disappointment.

People often ask her why she would not move elsewhere, she said.

Shortly before everyone was about to wrap up the noise reading at Kuba&#8217;s home, a roaring sound of a refueling airplane broke the silence.

Meanwhile, according to Marine Corps spokesman 1st Lt. Brian Block, there have been no changes to the flight operations at the air station.

The next session, scheduled for May 31, will be held at the courthouse.

older can drink overseas with their commander&#8217;s approval, depending on the host nations&#8217; drinking laws, officials said.

&#8220;This change allows overseas installation commanders to provide an on-base location for safe and responsible consumption of alcoholic beverages, vice an unprotected venue outside the installation,&#8221; said Bryan Driver, a Personal and Family Readiness Division spokesman.

The new policy does not apply to Marines on leave, Driver said.

In 1997, the Corps made the minimum drinking age 21 for Marines, with no exceptions, Driver said.

But in September, the Corps lowered the drinking age for Marines in Japan to 20 to reflect the local drinking age.

The Corps decided to change the drinking policy for all Marines to mirror Defense Department and other services&#8217; drinking policies, Driver said.

The Army, Navy and Air Force allow their servicemembers overseas to drink at age 18 or whatever the local drinking age is, officials said.

Defense Department and Army regulations have language similar to the Corps&#8217; new policy allowing servicemembers from 18 to 21 to drink on special occasions, but the Navy and Air Force do not, officials said.