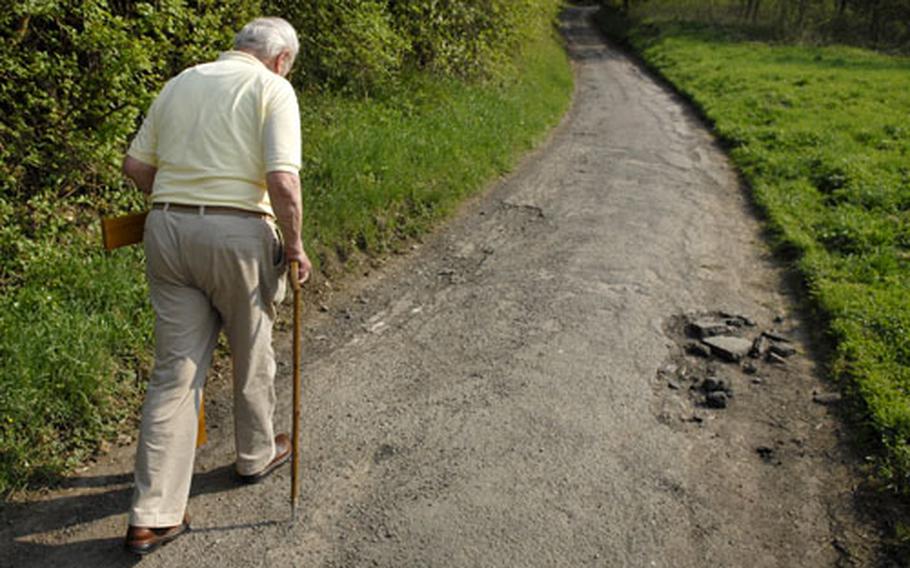 Richard Graff leads a group with a cross to be placed at the crash site of a B-17 bomber that was shot down during World War II in Kusel, Germany. Graff, 74, witnessed the aircraft crash that killed three crew members in the wooded area in 1944. (Ben Bloker / S&S)

Richard Graff leads a group with a cross to be placed at the crash site of a B-17 bomber that was shot down during World War II in Kusel, Germany. Graff, 74, witnessed the aircraft crash that killed three crew members in the wooded area in 1944. (Ben Bloker / S&S) 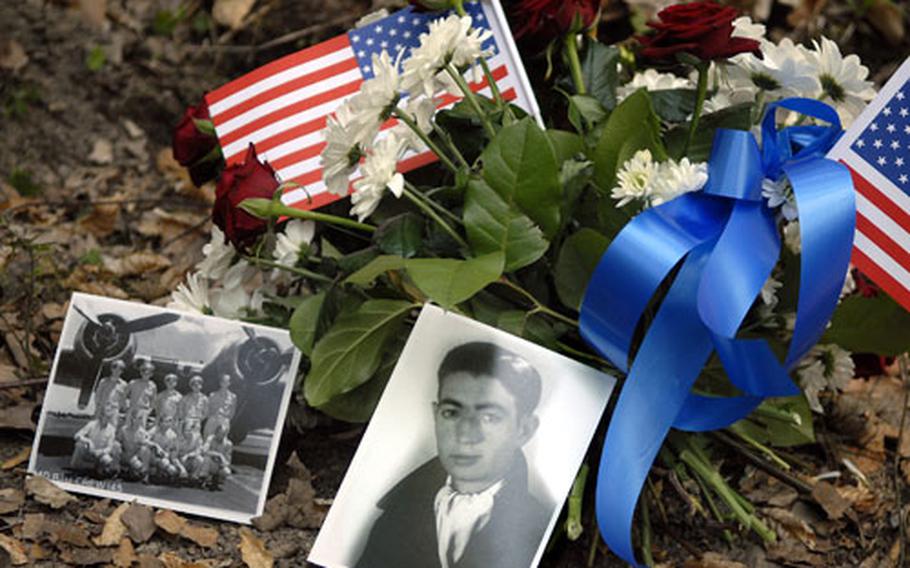 A picture of Anthony Burroughs, along with a photo of his B-17 crew, at the foot of a cross Wednesday at the crash site. (Ben Bloker / S&S) 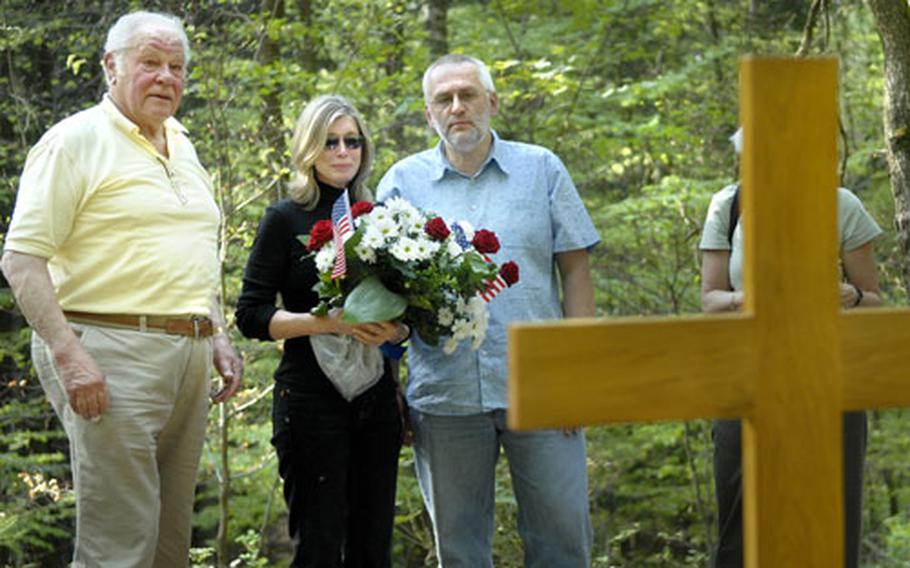 Richard Graff, Jan Loftis and Uwe Binkel, left to right, in front of a cross placed at the crash site. Loftis&#39; uncle, Anthony Burroughs, was one of three crew members who died in the crash. (Ben Bloker / S&S) 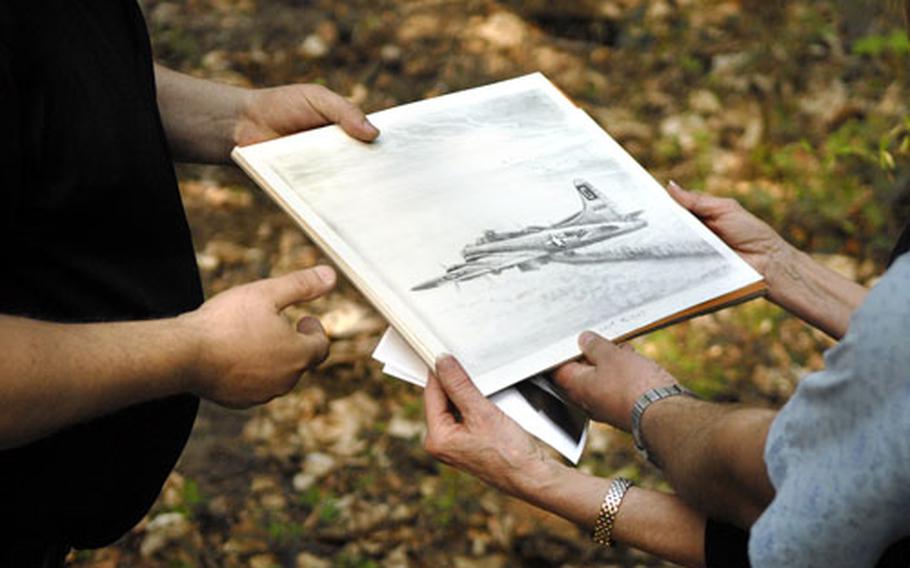 Jan Loftis, the niece of Anthony Burroughs, receives a drawing of her uncle&#39;s B-17 bomber from a local artist. (Ben Bloker / S&S) 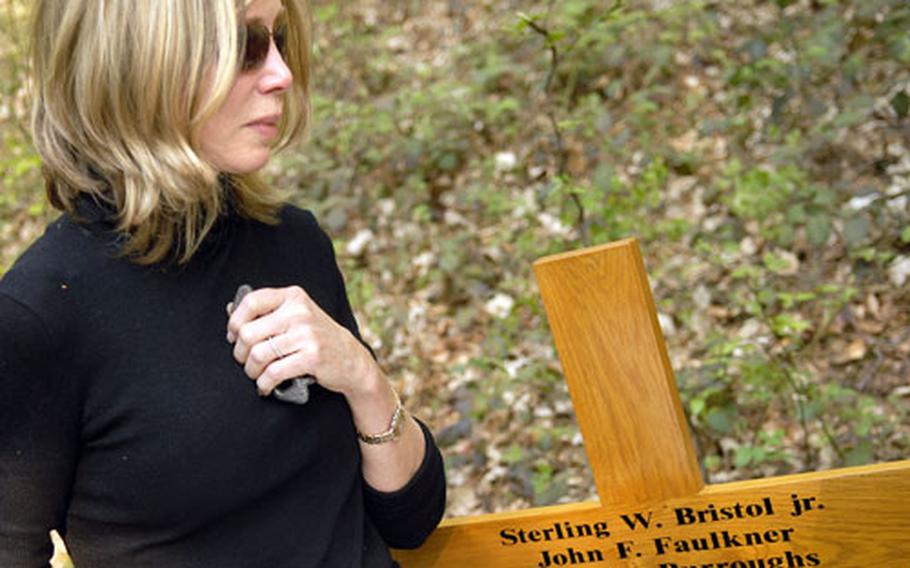 Jan Loftis holds a handle thought to be from her uncle&#39;s parachute. (Ben Bloker / S&S)

KUSEL, Germany &#8212; Only dirt still marks where a U.S. B-17 bomber crashed during World War II, killing three of its nine crewmembers.

On Aug. 9, 1944, the plane slammed into a patch of woodland in Kusel. The subsequent conflagration scorched the nearby trees and shrubs. That fire left behind one of the few remnants of the crash almost 65 years ago.

"If you dig here, the soil turns black," said Klaus Zimmer, one of the men who discovered the crash site.

On Wednesday, a cross was struck into the ground, commemorating the lives of Anthony Burroughs, John F. Faulkner and Sterling W. Bristol, the plane&#8217;s pilot. A wreath was placed at the foot of the cross by Burroughs&#8217; niece, Jan Loftis. Tears streaked her face as she said a few prayers for an uncle whom she had never known. Loftis, from Augusta, Ga., was born two years after Burroughs, the tail gunner in the plane, died. He was 22.

"It was hard to walk up that hill," Loftis said. "But I can let go now. This is the funeral that we never had the chance to have."

Uwe Benkel, director of a group that searches for information about missing warplanes, said bringing Loftis to the crash site was a highlight for his organization, which has marked 400 crashes, recovered 110 airplanes and returned the remains of 31 missing servicemembers.

Richard Graff, 74, of Kusel, a community south of Baumholder, helped fill in the blank pages for Loftis. He was just 10 years old when he heard anti-aircraft fire strike the plane, which was returning to an air base in England after its mission was cancelled due to bad weather. As the plane fell to the ground, flames and smoke spewed from it, Graff said. The plane then split into three pieces as it plunged into the woodlands. Graff dashed after one of the wings. It was ablaze.

"It smelled of smoke and burnt rubber," he said.

Soon officials arrived at the scene, and handed Graff a shovel to throw sand on the flames.

"The pilot was totally burned," he said. "Two other dead bodies were lying in the woods. They were the first American soldiers I ever saw in uniform."

One of the dead was Burroughs. He had bailed out and was, most likely, clinging to his parachute when burning plane fragments rained down on him. The shards severed his leg and cut his chute&#8217;s chords.

During the memorial ceremony, Benkel gave Loftis a blackened buckle. He believes it was part of Burroughs&#8217; chute.